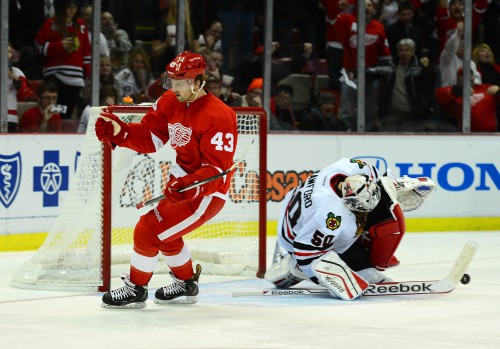 After tangling with two of the NHL’s best at home over the weekend, it was kind of obvious the Hawks took the foot off the gas tonight. I can’t say that they were looking past the Wings, or what’s left of them, but it sure looked like that. Whatever it was, the Hawks were just kind of second best all over the ice for most of the game. And all the little blemishes of the Hawks’ game lately were on display once again. They were trying far too much cutesy shit at the blue line, resulting in killer turnovers or just loss of possession. Their puck support was just not there, as too many Hawks without the puck were looking for space for a pass that wasn’t coming from a teammate that was buried in red instead of helping him. And when a team can really pressure the Hawks D below the goal line, they can get yippy especially when the forwards aren’t close enough to help. The Hawks needed to be more straight line, especially against a defense that is simply dying to turn the puck over. They have to. They want to. It’s their oxygen. Thankfully Brendan Smith is still around for the Hawks to grab a point.

Whatever the Wings’ faults, you’ll never find a Babcock team not working hard enough. The Hawks didn’t want to or couldn’t match that level, which is why they were getting caught on the puck and couldn’t make plays tonight. It’s why you’ll see the Wings had the upper hand in Corsi or possession tonight, which really shouldn’t happen with a team this beat up.

-Let’s start with the 4th line. Kruger’s goal was the only Corsi event for they were on the ice for. For those still coming to terms with this, that means the only shot this line attempted, or were even on the ice for, was Kruger’s goal. That’s impressive. In all the wrong ways.

We’ve debated on this site whether the Hawks getting away with icing this line as a checking line was due to them being better at it than we thought or simply being masked by the brilliance of Hjalmarsson and Oduya. Tonight was a big piece of evidence in the latter category. Because when Oduya’s level dropped (and he was terrible tonight), this line was getting eaten by land sharks.

This isn’t to pile on Bollig, which is our wont, because all three share responsibility. And this is with Kruger winning 12 of 14 draws. How can you not get out of your zone more when your center is constantly starting you with the puck? Oduya needing a protractor and an abacus to get out of his zone certainly didn’t help tonight. The best shift had to be when they got caught out there with Kostka and Leddy and then Bollig went for an ill-advised change that left Brandon Saad scrambling and taking two penalties.

This line has been terrible possession-wise all year as it is. And we can point to the goals-against being low, or the degree of competition, or the downright abusive zone starts, but when they’re this bad possession wise it throws off the next shift as well. Because the best we can hope for is a scramble out of the zone meaning the next shift starts on the back foot or with a defensive zone draw. They’re essentially a road block on nights like this.

-Let’s not stop heaping scorn on Oduya, who is not having the career year he did last year. Teams like the Wings who are determined to get at Oduya and others below the goal line and have the speed to do so still make me nervous. Especially when the support in the defensive zone just isn’t there. And Oduya was just all over tonight. Missed the rebound for the 1st goal, lazy in getting to the puck for the second.

-Of course, no Hawks d-man is going to be a gong show without getting an answer from Norris candidate Brent Seabrook. That’s his bit, dammit! So he went out and got completely horsed by Abdelkader to allow Nyquist’s tap in. Isn’t physical battling supposed to be Seabrook’s strength?

-I think I found the most annoying part of Kostka’s game. When retrieving the puck, if anyone’s on his ass he simply ignores the puck and braces for a hit. Of course, every d-man is supposed to protect himself but he has time to make  quick plays that are there when Leddy’s supporting him on the other side. Kostka eschews this to get hit, and when he does get hit he gets very separated from the puck. I know Rozsival can’t play every game. And I know you have to play Brookbank because if there’s an injury you don’t want him so stone cold. And I guess you have to play Kostka because….DUUUUUHHHHHHHHH…

-Once again your best possession forwards were Bryan Bickell and Kris Versteeg. And once again they saw no more than 10 minutes. There are things this world that are just beyond me.

-Boy, the Wings sure did clutch and grab a bit tonight, huh?

-Better from Saad-Shaw-Kane. I think I see the problem though, or problems. One, when Saad and Shaw were paired on the 3rd line, their directive was to get in on the forecheck and create from the cycle, which is their strength. With Kane, it feels like they’re both trying to crash through the same door to get to the net to get passes from Kane and getting stuck like frat boys who just discovered a secret keg. Second, now that the hammock shifts have gone to Handzus’s line, Kane is facing opponents who immediately smother him. People are flying at Kane as soon as he has the puck from all angles, normal coverage be damned. And with both Shaw and Saad going to the net and not giving him support, this may be why he’s gone quiet.

-Hey, the penalty kill was good.

-The power play aside from Sharp’s goal was not. Too cute, again.

I guess the mark of this team the past couple months is that when they’ve been off, they’ve been able to find a point or two that they haven’t always deserved instead of losing games outright. Tonight was another. It’ll give them a much nice platform to launch from when all the lights are working again.