He’s Marian Hossa and You’re Not – 81 to the Rafters, and Hawks Lose to Penguins 5-3 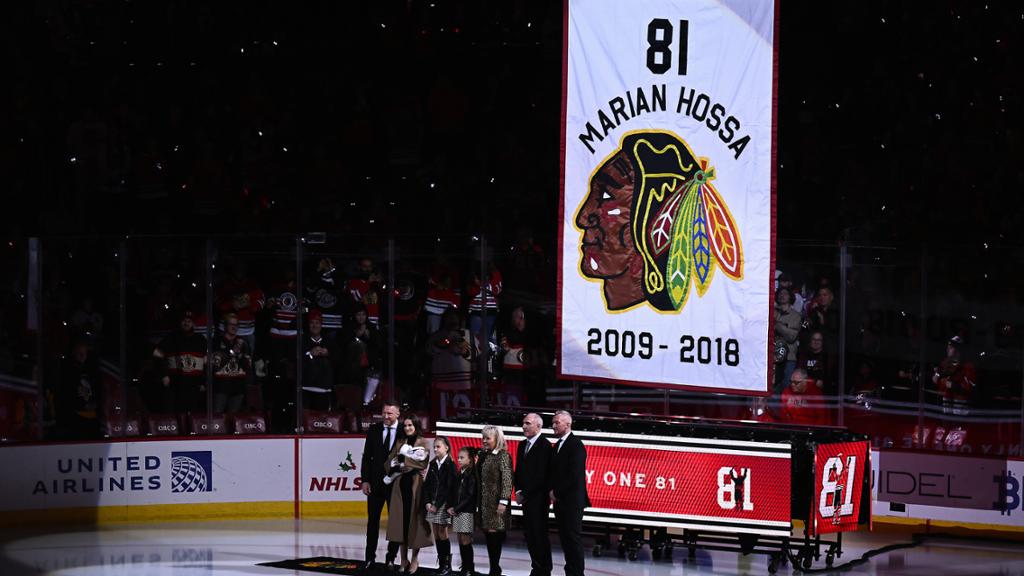 Last night was a special night for Hawks fans, and this wrap should start off with what’s most important—Marian Hossa getting his number retired, the greatest free agency signing ever, is fucking awesome. It’s why everyone was there—the stadium is half-empty all the other nights. It was as classy as they could make it, with the Hawks bringing back just about everyone who hasn’t had their name permanently disgraced for good reason. Hossa confirmed via anecdote that hockey players think for about half a second about what their jersey number is gonna be and yet his 81 will rightfully become a number that will never be worn again, as part of an elite group that future generations will look up to and regard as one of hockey’s greatest.

You’ve probably heard it surmised a hundred times by this point, especially since everyone else published this article 2 days ago, but Hossa permanently changed the Hawks with his free signing, turning them from a very very good team to an elite team. None of the Cups would’ve been won without him. What people may not want to recognize (and don’t worry, I try to block this out too) is that the Hawks were never the same after he retired. There was nobody to replace his two-way prowess, as much as Ryan Hartman surely tried. And the Hawks haven’t made the playoffs since outside of the fever dream I recognize as the 2020 play-in round. Hossa was a generational talent, one of the greatest two-way players ever, a Hall of Famer, and his jersey getting retired is more than just well-earned. The Hossa-Toews-Saad/Sharp line was my favorite line to watch, mostly because you knew they were going to outskill the opposing line on both ends of the ice and the Hawks were gonna score a goal.

The Hawks almost pulled out a win for Hossa against Pittsburgh, and they certainly battled until the very end to get one for him, but at the end of the day shoddy defense kept that from happening. There were a solid 17 seconds of elation before the Crosby goal was scored, though, and that’s as exciting as it’s gonna get for this generation of Hawks fans, for now. To the bullets!

Finally, to wrap things up, I went through the FFUD online archive and found a few quotes that I really think show who Hossa was as a player, in a way only this fair website can describe:

“Hossa’s shootout goal was a great fuck you moment. Yeah, he could have gone all Kane like and deked and wristed. But slapshots are way more fun.”

“The conclusion drawn here is that when a forward hits 30, his scoring starts to show a pretty serious drop. Unless your name is Marian Hossa, it seems.”

“But like a gangland style execution, Marian Hossa put a bullet in the brain of any hope the Kings might have had with a brilliant wrister off a rush at the top of the right circle through a defenseman’s legs and past Quick on the short side.”

“Sometimes you forget just how good Marian Hossa is. Last night was another example of him simply being a monster. He can skip all the damn morning skates he wants if he keeps having games like that.”