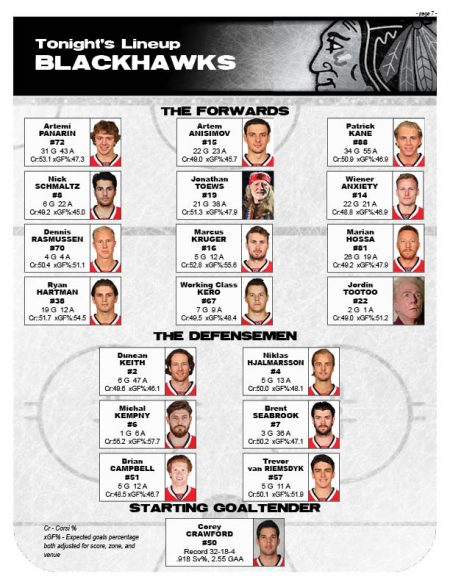 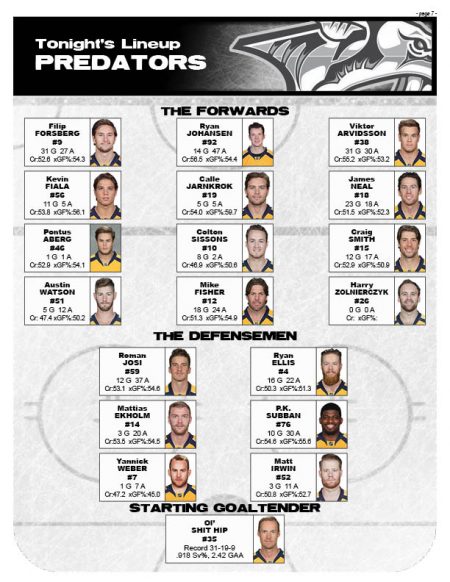 For the hosting Predators, they don’t really need to change much as Peter Laviolette was able to maximize a seriously flawed and hurt roster even without the benefit of last change on the road. And for even the people who picked the Preds in an upset, you’re bullshitting yourself and everyone within earshot if you actually thought that Harry Zolnierczyk (who is another fucking scumbag by the way) and Colton Sissons were going to play decisive roles. Their own fucking mothers didn’t think they were going to do that. But Lavvy went against type and gummed things up enough in Game 1 and for long enough in game 2 before the dam broke to get them to this point. Now with last change and playing with house money, look for him to pry off the restrictor plates and let his guys run wild. His top line of Forsberg-Johansen-Arvidsson pulled themselves to up over 50% in their share of possession thanks to Saturday night, and they’re sure to get more favorable looks and starts this evening. As predicted, in a primarily defensive role, Mike Fisher’s line has been ragdolled but has still managed to be on the ice for a goal while not allowing one. Given the tumult among Toews’ wings, the logical move would be to have Fisher take on the Style Boyz/Russian Spies, and Laviolette should show his hand early here.

On the blue line, now at home Lavvy should also be able to hide Matt Irwin and Yannick Weber better, both of whom are south of 40% in their share of shot attempts in two games. Ellis and Josi haven’t fared much better, but they should at least be better set up for success here. It’s been clear that the top unit of PK Subban and Mattias Ekholm are going to operate in conjunction with the Johansen line as a 5 man unit, because though they didn’t get the changes they wanted on the road, there was still a concerted effort to get them all out there together, with Subban playing 15 of his 35 even strength minutes behind that group, far and away the most for forwards.

In net, it appears that the blog-wide Fels Motherfuck placed on Ol’ Shit Hip has done more for his career than any kind of scheme, training, or workload roadmap ever could. And the team on the other bench can harfharfharf all they want about greasy goals and traffic and all the other associated bullshit, but the scouting report is still the scouting report. Avoid his glove and get him moving laterally. And if the Preds go balls to the walls tonight with their hillrod fans behind them, their defensive structure should suffer as a consequence and it there will be lanes to shoot at him.

As for the Men of Four Feathers, there has been a lot of bluster in the press with all of the aforementioned and seemingly obligatory garbage about what they need to do and how they need to do it, but the lineups show only minor tinkering here and there show a patience that this series could very well come back to them without the need to throw things in the rock polisher just yet. Ryan Hartman has been sent down to the fourth line where he’ll have less responsibility, and more than likely once again as a punitive measure for being an asswipe at the end of Game 2. John Hayden takes a seat after providing nothing much, with TOOTBLAN drawing back in for some reason. As a result Dr. Rasmussen will get Kruger’s wing opposite Marian Hossa, which could form a pretty decent shutdown unit if Joel Quenneville were so inclined to get aggressively matchy-uppy.

The blue line remains unchanged in its entirety and if Lavvy lets his forward group off the leash, it’s going to look rougher for Johnny Oduya than it has already. He and Seabrook do not compliment each other in the least, and them being paired together exacerbates their problems with speed to the outside, something the Predators do not lack. Particularly on the road this poses a matchup problem for the Hawks that is wholly avoidable by reuniting Oduya with Hjalmarsson and just having them absorb top threats without an expectation of offensive output at the other end. But Quenneville is trying to have have his Rover/Centerfielder model on all three pairings, and they just don’t have the capability to do it anymore. It’s why he throws Seabrook and Keith out there together when chasing late, but there are ways to not be facing that situation in the first place.

Corey Crawford keeps his cage despite the fact people will always hate him. It’s hard to blame him for much this series other than the fact that he hasn’t matched the level of his counterpart yet.

With the late start and how things tend to get on Broadway in Nashville anyway, and how Laviolette figures to raise the stakes with speed from jump, it is going to be an absolute tornado of piss colored jerseys for the first 10 minutes of this game. Never has getting the first goal of a game mattered more to this era of a Hawks team, as pressing AND trailing isn’t going to get them where they need to be. The places where the exploits can be found are still as glaring and present as ever. It simply requires a recognition of the game being played in front of them by the coaching staff, and the fortitude to execute by the players that have been there before. Let’s go Hawks.