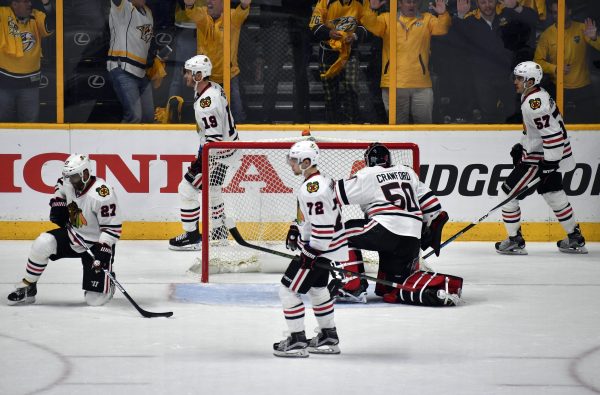 When I look back on it, I guess my predictions on this series, and the ones I assumed would follow, were based on hope more than I realized. I hoped Duncan Keith was merely pacing himself for what mattered. I hoped that Toews’s midseason scoring binged signaled he had not been infected by the Kopitar gremlins. I hoped that Quenneville would realize what he had in Oduya and TVR, and more importantly what he didn’t have, and would adjust accordingly. And I hoped that the weight of all Corey Crawford had to carry at least in the first half of the season wouldn’t be too much to leave him incapable of more miracles now. Of all those, he got the closest.

While there will be a lot of ink spilled tomorrow about “grit,” “want to,” “determination,” and whatever other bullshit we’ve built our career in dispelling, the answer is more simple than that. It’s speed. The Preds can trap, or they can forecheck, they can collapse, but whatever they do they can do it so much faster than the Hawks. When the Hawks simply mishandle a pass, or take an extra beat to get it under control, there’s a Pred there. When they do manage to get it deep, the mobile Preds defense is there. When the Hawks think they have a passing lane, it’s filled faster than they can compute.

And deep down, I think we knew this. But we assumed that the Hawks would have an answer for their one genuine scoring line, and they simply haven’t. Ryan Johansen has simply tossed around Jonathan Toews. They’re backed up by any one of Josi, Ellis, Subban, and Ekholm, so they get the support that Keith, or Seabrook, or Hammer, simply are not capable of anymore. And we can’t sit here and hope it’s coming back. It’s likely not.

The only line to score in Game 1 was Johansen’s. Game 2 was a disaster. To take Game 3, all the Hawks had to do was keep that top line under wraps. And they couldn’t do it. Sure, it was bad luck involved. An odd bounce off the glass behind the goal. What could have been goalie interference (tell us again about your caring about head shots when our goalie gets hit in the head) wasn’t. I guess it could have gone either way. But still, the task wasn’t all that simple. And they couldn’t do it.

And now the Hawks are facing a lot of tough questions, and a lot of them they aren’t going to have answers for. There will be time enough for those.

-Everyone including us hasn’t been hesitant to take their shots at Keith or Toews or Oduya or the kids. But it’s not fair that Marian Hossa escapes scrutiny. Sure, he’s 38, but a lot of the Hawks success this year was because he was present again. You’ve only noticed him this series when he was turning the puck over at the Nashville blue line to lead to the winner tonight. This came after another drop pass when turning down a shot. He just hasn’t been there. And he’s probably not going to be in the future.

-But let’s not pin it on Hossa. Toews turned down a shot as well, and he was dog vomit all night anyway. And there was still Oduya and TVR between Fiala and Neal and Crawford. But you don’t need me to tell you how that went. They could have spent the year developing Michal Kempny for this kind of moment, and he’s a better option now than either of those. They didn’t. They gave Q another blanky. And this is what they get.

-I really don’t know what to make of Toews now. Last season Kopitar was manhandled by Joe Thornton in a series. This past season he was not even a shell of his former self. This is the fear with Toews, that quite simply he won’t be able to recover from the miles. The descent could be steep. They had better hope not.

-Without Crawford, the Hawks would have been embarrassed. And again, mostly by one line.

-Whatever I think of him and whatever he makes me feel, Patrick Kane seems to be the only one who wants to stand up and be counted. Panarin hasn’t wanted any part of this. Hossa is probably finished as a playoff contributor. Toews has been a human trail-technique. Kane at least wants the puck and keeps trying to make something, anything happen.

-Oh, and Niklas Hjalmarsson’s aging curve has started, and let me tell you that can fall apart in a goddamn hurry given the style he’s played.

-Your one Hawk above water tonight in possession was TVR. Who was actually ok in the 3rd. But of course, he found the blender in overtime.

-This is the Preds team we thought we would see before the season. The one that only briefly flashed at points during the season. It’s fun to point at Q, but I don’t know what more he can do. There’s a pace his blue line can play at, and there’s the one Nashville is playing at. And they’re not getting there.

And that will be why the Hawks’ window, whenever this dust settles, is closed.