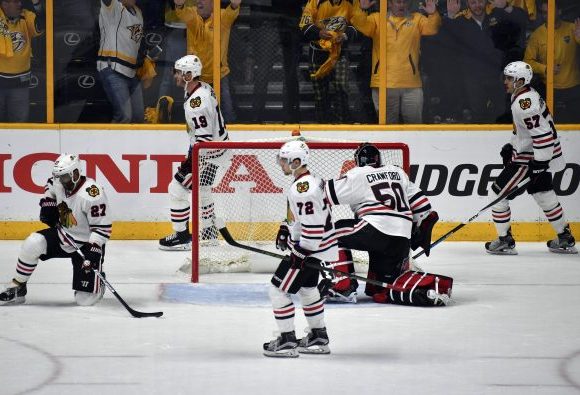 When I look back on it, I guess my predictions on this series, and the ones I assumed would follow, were based on hope more than I realized. I hoped Duncan Keith was merely pacing himself for what mattered. I hoped that Toews’s midseason scoring binged signaled he had not been infected by the Kopitar gremlins. I hoped that Quenneville would realize what he had in Oduya and TVR, and more importantly what he didn’t have, and would adjust accordingly. And I hoped that the weight of all Corey Crawford had to carry at least in the first half of the season wouldn’t be too much to leave him incapable of more miracles now. Of all those, he got the closest.

While there will be a lot of ink spilled tomorrow about “grit,” “want to,” “determination,” and whatever other bullshit we’ve built our career in dispelling, the answer is more simple than that. It’s speed. The Preds can trap, or they can forecheck, they can collapse, but whatever they do they can do it so much faster than the Hawks. When the Hawks simply mishandle a pass, or take an extra beat to get it under control, there’s a Pred there. When they do manage to get it deep, the mobile Preds defense is there. When the Hawks think they have a passing lane, it’s filled faster than they can compute.