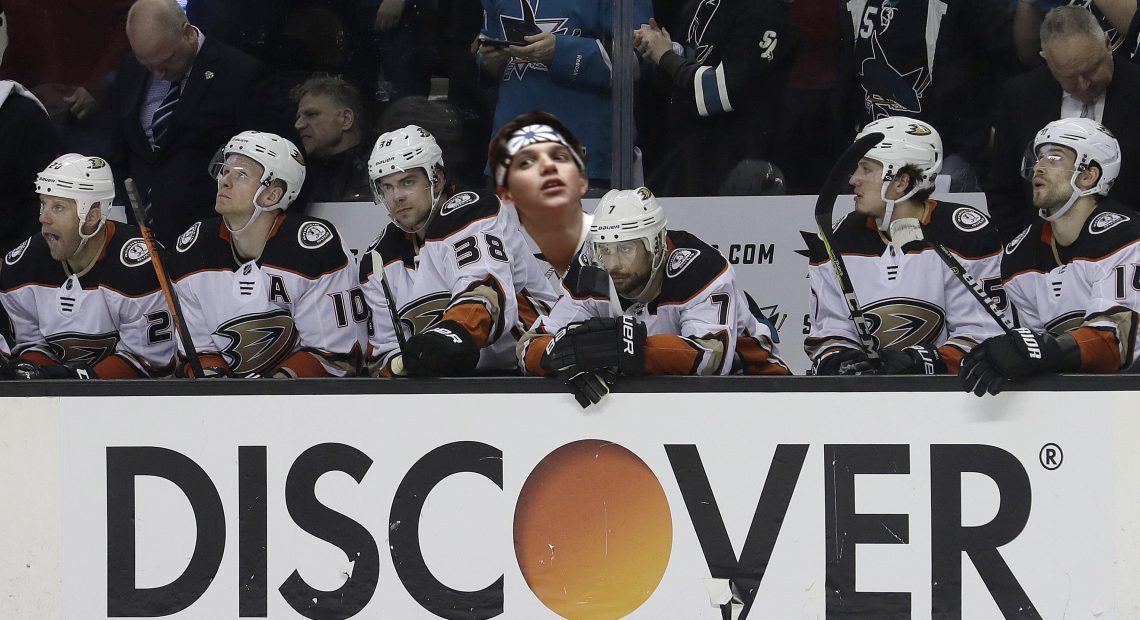 We should say there’s always a caveat this early in the season. The Ducks have only played nine games. But if trends continue as they have begun for Anaheim, they might be one of the worst possession-teams the league has seen in some time. Which makes one wonder if John Gibson realizes just how much power he wields over the organization. He is the only reason they’ve won a game. If the Ducks are even average this year, with the way things are going, it’ll be because of Gibson. So if you’re Randy Carlyle, you’d better start buying all sorts of dinners, gifts, and free contractors for the house you’re going to build for him, if you want to keep your job. Because Gibson could send Carlyle to CV-writing with a snap of his fingers.

Randy Carlyle is an idiot, but so far this year he has put together a simply exquisite buffet of terrible hockey for the Anaheim fans to enjoy (not that they’d know the difference). Let’s review: The Ducks have a team-wide 41.1 CF%. That’s last in the league by a full point, behind such luminaries as the Islanders, Canucks, and Senators. Their expected-goals percentage, and you really want to take a breath or two before reading on here, is 36.9%. That starts with a “3,” That’s a full five points behind the 30th-placed team, which just so happens to be the Hawks. Just for a frame of reference, no team has finished a season with a mark below 40%. So if the Ducks want to make history, they’ll just have to stay on their current course.

The only team giving up more shots on goal than the Ducks at evens is the Hawks, and they have one period to thank for that. And where Joel Quenneville could point to a list of his d-men and quite rightly ask, “Just what the fuck do you want me to do with that?,” Carlyle has no such outs.

This is a team with Hampus Lindholm, Cam Fowler, Josh Manson, and Brandon Montour on its top four. Ok, the forwards have been without Jakob Silfverberg, Nick Ritchie, and Ondrej Kase due to injury. Don’t you dare mention Corey Perry’s aged and poisoned ass when talking about team speed. His feet went out the door two years ago. But still, Andrew Cogliano, Rickard Rakell, Adam Henrique, and Sam Steel are around. This isn’t a team bereft of speed.

So why is it playing like an overturned meat truck? They have d-men that can get themselves up the ice. They have forwards that can chase down the puck. And it’s all not working at all. They continue to dump the puck in in a league where most teams have d-men who are just going to turn around and skate away from you. Their d-men don’t stand up at the line even though they have recovery speed everywhere. And no one can seem to spell “breakout” much less complete one.

Carlyle was an idiotic, old-boys hire from the get-go. This is how insular the NHL had gotten, as GM Bob Murray didn’t just go to the Old Boys’ Club for a coach after turfing Bruce Boudreau and his allergies to home Game 7s, he went back to the coach they’d already kicked out. Did he just walk out to the parking lot and find Carlyle wandering around aimlessly kicking pebbles and looking like he had nowhere to go? Hiring him for the coaching job in the same fashion as you would adopt a lost dog actually makes the most sense.

The Ducks “success” under Carlyle basically amounts to Cam Talbot dying of exhaustion in the ’17 playoffs. They were crushed by the Sharks last year, signaling that things had to pivot from where they were. They clearly haven’t.

Gibson might keep Carlyle in a job all season, if he sees fit. Maybe the returning forwards will provide more pop. But clearly this is a ship that’s got a ton of holes in it, and the water level is rising.

Tags: Anaheim Ducks John Gibson Randy Carlyle they don't even know which was is backwards