Game #40 – Golden Knights vs. Hawks: Spotlight – Reilly Smith, Jonathan Marchessault And What A Strange World This Is 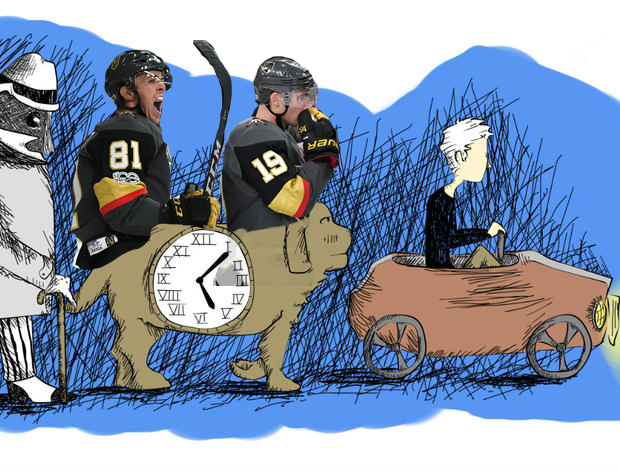 You can get a pretty decent illustration of just how hockey works, and doesn’t work, via the journeys of Reilly Smith and Jonathan Marchessault.

Let’s start with Smith. Back in the day, when men were men and all that, Smith piled up 58 goals in two seasons at Miami of Ohio. That’s suggests a natural goal-scorer, because you just don’t see players pile up 30-goal seasons in college, especially when they’re not obscenely overaged.

But hey, you gotta give up someone to get someone, and Smith found himself part of the Tyler Seguin trade. Of course, the Seguin trade was just an example of how dumb GMs can be, and Peter Chiarelli is at the head of that list. Smith put up a 20-goal season in his first year in Boston, and then a further 13 the next season. Not exactly a huge season but he’d already flashed secondary scoring talent and at the time was still only 24 and entering his prime.

Coming off those two seasons, the Bruins were certainly up against the cap but after 13 goals and a restricted free agent, the Bruins weren’t going to have to break the bank to keep him. Instead, they punted him to Florida so they could bring Jimmy Hayes home, and basically bringing him home was the only appeal because Jimmy Hayes sucks.

Smith would go on to score 40 goals over two seasons in Florida. Again, you can’t just “find” guys who score 20 goals per season. They’re kind of the whole point of the operation here. And while the Panthers might have their own internal budget, Smith was considered surplus to requirements by Dale Tallon, who apparently thought this was part of his “I’M IN CHARGE AGAIN!” warpath to undo anything that might have had to do with any sort of analysis. We’ll come back to Smith.

Marchessault didn’t quite flash the same way that Smith did below the NHL. Yes, his last season in the QMJHL saw him score 40 goals, but in that league if you can stand up and avoid sneezing during a game you probably get 40 goals. He put up three 20+ goal seasons in the AHL after that, which isn’t easy but also isn’t a neon sign that he has to be called up. He came up for air for about half of a season in ’16-’17 in Tampa, scored seven goals, didn’t really have a way to crack the lineup, and was moved to Florida last season.

There he popped for 30 goals. And while it’s easy to dismiss that, as he’d never hit 30 as a professional anywhere, a 15.5% shooting percentage isn’t stratospheric. And yet, Tallon thought he was expendable, too. A guy who just put up 30 goals.

And this is where things get really funny. In last summer’s expansion draft, Tallon chose the 4F-D model for his protection list. Which left Marchessault and Smith exposed, for the cause of Alex Petrovic and Mark Pysyk. Which doesn’t make any goddamn sense at all. Yes, championship teams can be built from the back and the Panthers are going to need something beyond Keith Yandle and Aaron Ekblad. But Petrovic and Pysyk? They’re ok, maybe even “nice” players. But we all know the adjective “nice” is at best a backhanded compliment. They’re also both 25. If they were going to be anything more than they are, we’d have seen some signs of it by now.

Making it worse, the Knights took Marchessault, because cheap 30-goal scorers just don’t arrive on your doorstep, and then Tallon handed them Smith for a 4th round pick. That’s it. Maybe the Cats needed to dump salary, maybe they didn’t, but Pysyk was making just about the same.

The Florida Panthers are 19th in the league in goals per game, just so you know.

And the story doesn’t end there. Marchessault and Smith have lit it up in Vegas, combining for 25 goals and 68 points so far. Now, if this were a normal world, they’d be doing this for an expansion team that wasn’t going anywhere was was looking three or four years down the line. Both were headed into free agency after the year, Smith restricted and Marchessault into unrestricted. They would have been prized possessions at the deadline for a bunch of teams, where the Knights could have collected high draft picks/prospects that will matter when this team matters.

Except the Knights do matter now. Or at least they think they do. Thanks to whatever you want to attribute it to–insane goaltending, dumb luck in dumb overtime rules, Vegas flu–they sit near the top of the division. So perhaps they thought it would be a tough sell to their burgeoning fanbase to flog two of their three top scorers.

Instead, they extended both for $5 million a year until for the next four years in Smith’s case and the next six in Marchessault’s case. Both will have entered their 30s when their deals are up. It’s not scandalous, but it is curious.

Because if the Knights’ goaltending drops off next year, or they don’t get the overtime results, or visiting teams actually act like professionals, what are the Knights going to want with two scorers in their late 20s that they can’t move? They just eroded a lot of their value. On a normal track, by the time the Knights are really ready to contend, both will be past their primes.

But does anything work the way it’s supposed to now?