Game #4 – Ain’t No Particular Sign I’m More Compatible With – Hawks 3, Wild 3 (Wild Purify Themselves in the Waters of Lake Minnetonka) 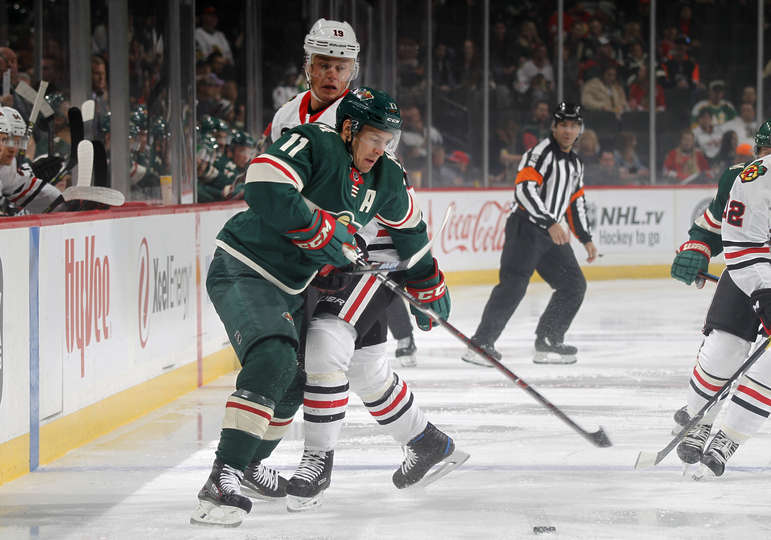 We all whined and moaned about how the Hawks didn’t give us enough hockey last year. They’re making us whole now, with their fourth straight OT game and point. Let’s kick it.

– Reports of Jonathan Toews’s death were wildly exaggerated. As he’s been wont to do this year, Toews took the bull by the balls in the first period and looked like the kind of guy they build statues for. His assist on the first goal was one of the first times we’ve gotten to see the kind of Old Man Strength Marian Hossa used to put on display, and it looked good on The Captain. His awareness and speed gobbling up the rebound on Top Cat’s blocked shot and passing off to DA BIG KAHUNA gave him his second point of the night. You’d think that he can’t do this all year, but barring injury, I don’t know that there’s any reason he can’t. He’s playing like he has something to prove, and we should relish it.

– Congrats to Dominik Kahun on his first NHL goal. It’s hard enough to get one over the shoulder from the angle he had on it, and it’s doubly hard when the goaltender is an actual giant, but he kept his cool throughout. Kahun has impressed so far on the top line, and he led all Blackhawks with a 56+ CF%. It’s still too early to tell whether this is going to be a thing going forward, but Da Big Kahuna has handled the pressure as well as you can ask.

– Thank Christ Alex DeBrincat is 5’7”. For all the guys who have ever had a really nice girl lie to them about how size doesn’t matter, you now have someone tangible to point to. His one timer on the PP was gorgeous, but perhaps even more impressive was how stout he was with the puck. Since coming up last year, DeBrincat has had a penchant for either not turning the puck over, or, on the rare occasion that he does, turning around and picking it right back up. It’s one of the less talked about aspects of his game, but DeBrincat’s ability to cause turnovers is sometimes otherworldly. Motherfucker is special and can probably score 40 goals with Toews this year.

– One last totally positive note: Nick Schmaltz’s stickhandling was divine tonight. The fancy stats won’t back it up, but Schmaltz was everywhere. Late in the first, Schmaltz walked the blue line through Jan Rutta after Rutta’s puck allergy flared up, which turned into a one timer for Schmaltz after he passed it off to Patrick Kane, who mostly couldn’t be bothered tonight. Schmaltz also had an A+ chance in the second on the PP, but got stuffed by Devan Dubnyk and his stupidly spelled name. And in the OT, after looking like he was going to fumble the puck away, he managed to pry it back in the offensive zone at the end of his shift. He may not have had any tallies, but this was a good-looking game for him.

– It’s hard to blame Cam Ward for tonight. The Hawks posted a fucking 39+ CF% on the night. That’s really hard to do. The first goal was the result of Jan Rutta having his legs cut out under him and a no call. The second resulted from a behind-the-net pass from Eric Staal, followed by Chris Kunitz pondering the great mysteries of life for the first and most inopportune time of his life. You can maybe give him some of the blame on the third goal, but again, it’s hard to get mad at a goalie for giving up a goal that started from behind the net. Cam Ward should never have to face 40+ shots, but given that he did, he did much better than anyone could have predicted.

– Brandon Saad was a little more noticeable for the right reasons tonight. He had at least two high-quality chances that he couldn’t pot, and his possession numbers were garbage (38+ CF%), but there was a little more life to him.

–  Henri Jokiharju. We love him. He’s going to be excellent. He was excellent tonight, relatively speaking, and flashed a ton of confidence throughout most of the game. He’s probably going to be looked at as the at-fault defenseman on the Wild’s game-tying goal on the short hand, but this is the kind of stuff we’ve been warning people about. He’s 19, so he’s going to get overpowered at times. You take the bad with all the good.

– If we’re going to be subjected to Brandon Manning and Jan Rutta, tonight is probably the best example of how to turn shit into a shingle. They played strictly as a third pairing, and neither of them made any horribly egregious errors (other than, you know, playing professional hockey instead of working a 9–5. BUT THAT’S NOT WHY YOU CALLED). As much as I want to fault Manning for skating too far up on the wrong side of the ice in an attempt to clear right before the Wild’s first goal, if Rutta gets the tripping call he deserved, it’s a load of nothing.

If anyone had told you the Hawks would capture six of their first eight points, you’d ask for a dose of whatever they were taking. It looks like this team is going to be exciting if nothing else.

Line of the Night: “I thought that pass was purrrrrrfect to The Cat.” –Eddie O. on Top Cat’s PP goal.