High On The Hog: Crack Open The BMO 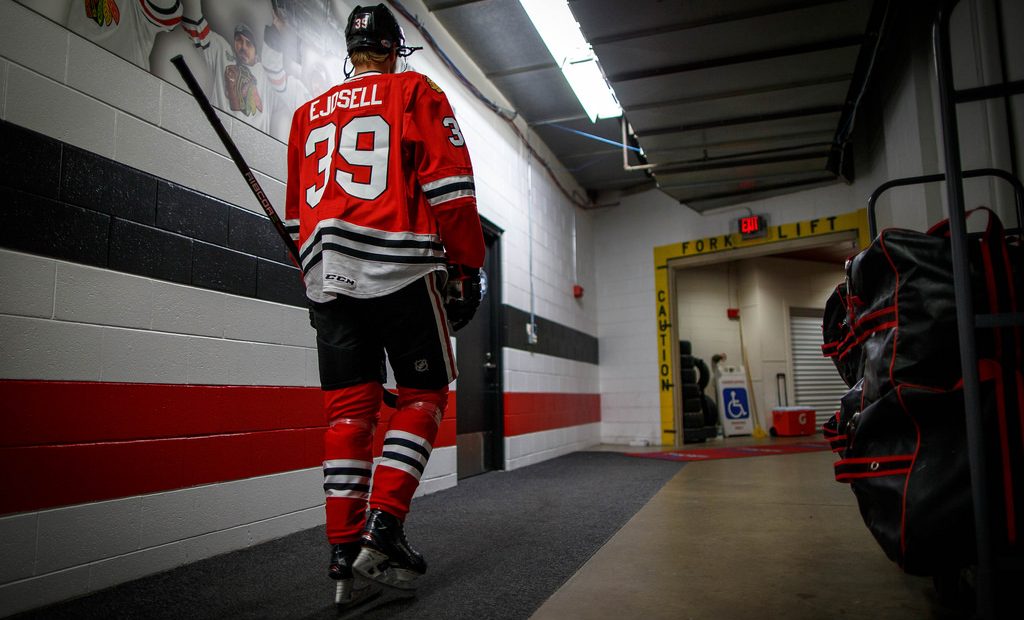 After beginning the 2017-18 season 0-for-Cleveland, the Rockford IceHogs are back in action in friendlier confines this weekend. Chicago’s AHL affiliate kicks off the home portion of the schedule Saturday night vs Texas. Sunday, the IceHogs host the Hershey Bears.

Here’s an update on the piglets as coach Jeremy Colliton readies his charges for the weekend set, along with an in-depth look at the upcoming opponents.

On Tuesday, Alexandre Fortin was recalled to the Blackhawks. He played Thursday night in Minnesota. He may be headed back to Rockford in time to take part in the festivities this weekend. If not, there’s a possibility that the Hogs could recall one of their AHL contracts in Indianapolis.

The home portion of the season gets underway at the BMO Harris Bank Center when the Texas Stars visit following their Friday night tilt in Iowa.

The Stars are new to the Central Division, though Hogs fans are mighty familiar with this team from the 2018 Western Conference Final. Texas defeated Rockford in six games to advance to the Calder Cup Final, which they dropped to Toronto.

The Stars develop players and are also committed to winning, which they have done with regularity. Now entering their tenth year of operations, Texas has three trips to the Calder Cup Final, including an AHL championship in 2013-14. They have reached the playoffs in seven of the last nine seasons.

There was quite a bit of turnover from last spring’s club. Several lynchpins to the Stars playoff run, like their Rockford counterparts, have moved on. This includes captain Curtis McKenzie, forwards Brian Flynn, Sheldon Dries and Jason Dickinson as well as swingman Brent Regner.

First on the list of familar faces is Travis Morin, who has been with the team since its inception. The 34-year-old forward is on an AHL deal with Texas and is coming off a 61-point season (10 G, 51 A). Center Justin Dowling (17 points in the postseason) is also a long-time fixture for the Stars who is capable of creating offense, as is Denis Gurianov (19 goals in 2017-18).

Texas added Park Ridge, Illinois resident Michael Mersch, a power forward who scored 49 points (21 G, 28 A) for Ontario a season ago. Also coming in to help up front is former Bruins farmhand Colton Hargrove, who is coming off a 33-point season (16 G, 17 A) with Providence.

Erik Condra, who spent the last two seasons with Syracuse, has 366 games of NHL action under his belt. He is still an effective two-way player at the AHL level and will bring a lot of experience to the table for Texas, much like Flynn did last season.

On the defensive side of the puck, AHL veterans Dillion Heatherington and Reece Scarlett (who injured his left leg in the season opener with Grand Rapids) are joined by Joel Hanley, who has spent time in Portland, St. Johns and Tuscon in his five-year pro career. Gavin Bayreuther is also back for his third season after a seven goal, 25 assist effort in 2017-18.

John Nyberg is beginning his first pro season, though he did square off with the Hogs in the playoffs last spring. Free agent defenseman Ben Gleason is also in his rookie year with Texas.

Mike McKenna, who anchored the crease for the Stars late last season, is now continuing his tour of the AHL with Belleville (his 15th AHL stop). Last year’s starter through much of the regular season, Landon Bow, should be the primary goalie for Texas. Joining him in net is rookie Colton Point.

Arriving at the BMO Sunday, after visiting Grand Rapids on Friday night, is the AHL’s oldest franchise, the Hershey Bears. The IceHogs have a home and away with the Bears after facing Hershey for the first time ever in two games last season. Rockford won both meetings.

The Bears were last in the Atlantic Division in 2017-18, missing the playoffs for only the second time in the last 13 seasons. A number of the team’s leading scorers are with other clubs, like Chris Bourque (53 points) and Wayne Simpson (42 points). Riley Barber (20 G, 18 A) returns to Hershey for his fourth season. Liam O’Brien (17 G, 9 A) is another holdover.

One new addition is center Mike Sgarbossa, a seven-year AHL vet who had 40 points (16 G, 24 A) with Manitoba last season. Another notable newcomer to Hershey is former Hogs forward Jeremy Morin. Back to the AHL after a year in Europe, Morin is on an AHL deal with the Bears. Morin had several productive campaigns with the IceHogs, including a 30-goal effort in the 2012-13 season.

Longtime AHL veteran Aaron Ness is back for another season on the Hershey blueline after scoring four goals and 25 assists for the Bears last year. 6’2″ defenseman Lucas Johansen (6 G, 21 A) is back for his second season, as is Connor Hobbs (3 G, 13 A). Colby Williams is another experienced defender who returns to the Bears lineup.

The net duties are being handled by Vitek Vanecek, who is starting his third pro season in Hershey. He posted a 3.04 goals against average and an .888 save percentage in 32 games last season. The IceHogs beat him in 4-3 in an overtime game in Hershey back in February.

Rookie Ilya Samsonov was the Capitals second-round pick in the 2015 NHL Draft. The 21-year-old came over from the KHL, where he had played for the last three years.