Game #27 A Broom is Drearily Sweeping Up the Broken Pieces of Yesterday’s Life – Hawks 1, Kings 3 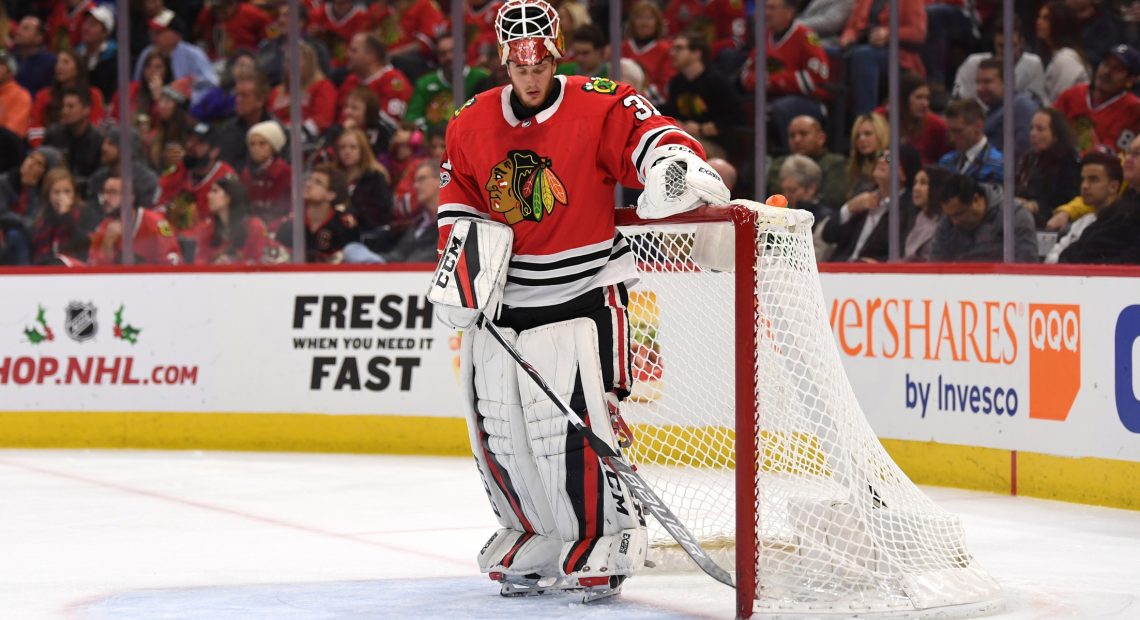 It’s been a grueling week. The Hawks have barely tread water over these last five games, and they’ve lost their best player due to some unspecified injury (groin, don’t you think? When it’s a goalie I always think groin. Don’t read into that statement). And this hell week ended with an exhausted whimper tonight, which left me feeling more pity than anger. To the bullets:

– So Panik didn’t get benched tonight but rather demoted. OK, whatever, the top line certainly needs to get better. But who got moved up? Was it the guy second in points and second in goals who needs faster linemates? Oh no, oh no no no, you silly person who thought that. It was John fucking Hayden. Now, in all fairness, Hayden hasn’t been playing all that badly (hey, he’s got nine points). Also, there are legit reasons to keep DeBrincat on the third line where he’s been making Heart Man better. But, if Q is going to start tinkering with the top line, the fact that he’d pass right over the chance to at least SEE what DeBrincat could do with Toews and Saad seems, well, both stubborn and stupid, which is the worst combination. And then Q went back to Panik late in the third and Toews scored…so what was the point of that change anyway?

– Fatigue showed tonight, as the Hawks started really slowly. By the mid-point of the first period they had managed only one shot. They finished that period with a paltry three shots. But they picked it up in the second and actually passed the Kings in shots. And they led in possession for the first two periods, 55 CF% and 65.7 CF% respectively. Seriously, it was fucking with me. I kept looking at it and, as we say around these parts, I was angry at numbers. How could the Kings lag in possession and yet still be driving the play? Or at least thwarting the Hawks’ many decent attempts in the second? Jonathan Quick was a big part of the answer to that, obviously. And once Folin scored the first goal in the third period, you could see the weight of the past week descend over them. Even Toews’ pyrrhic goal couldn’t change that momentum.

– The power play went 0/4 and continued to suck. You’re tired of hearing it, I’m tired of writing it, and yes the Kings’ PK is the best in the league. But it still sucked. No one could keep the puck in the offensive zone—I mean at times it was laughable. Some other great unintended comedy? On their first man advantage of the game, the Hawks managed to take a too many men penalty while they were on the power play for that very same penalty. It was very meta.

– Anton Forsberg is like the proverbial Rodney Dangerfield. If you look at his record with no context you’d dismiss him outright, but he’s actually played well. Tonight was no exception. A screen and some deer-in-headlights play by Forsling led to the first goal, but other than that he was spot on (the other two goals were empty netters so you can’t exactly hold those against him). He had a great sequence of saves midway through the second, and at no point did he really lose his net. This guy deserves much better.

– Speaking of a deer in the headlights, Brian Campbell is utterly unwatchable as an analyst. My esteemed colleague Adam brought this up after last night’s game, and I have to wholeheartedly agree. Campbell looks nervous and tongue-tied at every moment. And you know what? I don’t hold that against the guy—I can’t even imagine what a moron I would look and sound like on camera—but that’s why he shouldn’t have this gig. This team is cringe-worthy enough as it is; their on-air personalities needn’t be too.

So where to from here? The Hawks have a much-needed few days off, and then a sort-of-maybe soft part of the schedule (after the Capitals) with some relative bottom-feeders like the Sabres and Coyotes. However, now they need all of those points more than ever, and I’d be lying if I said I wasn’t concerned about where the season goes from here. No, I’m not trying to be over-dramatic and there is still a lot of season to go. But it’s been, as I said, a rough week where they kinda got dong-whipped, so let’s all pause, and try to get back on track next week. Onward and upward.

Quote of the night (actually it’s a tie because you’ve got to get a load of this amazing insight by Campell):

“Little mess-up by the LA guy there.” –Brian Campbell

“Because I can’t remember anything, I got some help with that movie.” –Pat Foley

Beer de jour: It was an all-Fort Collins night: Accumulation IPA by New Belgium and 90 Shilling by Odell. (Actually it was me rummaging through the fridge to see what was left over from the weekend, but it should tell you something about my beer inclinations.)