High On The Hog: New Arrivals 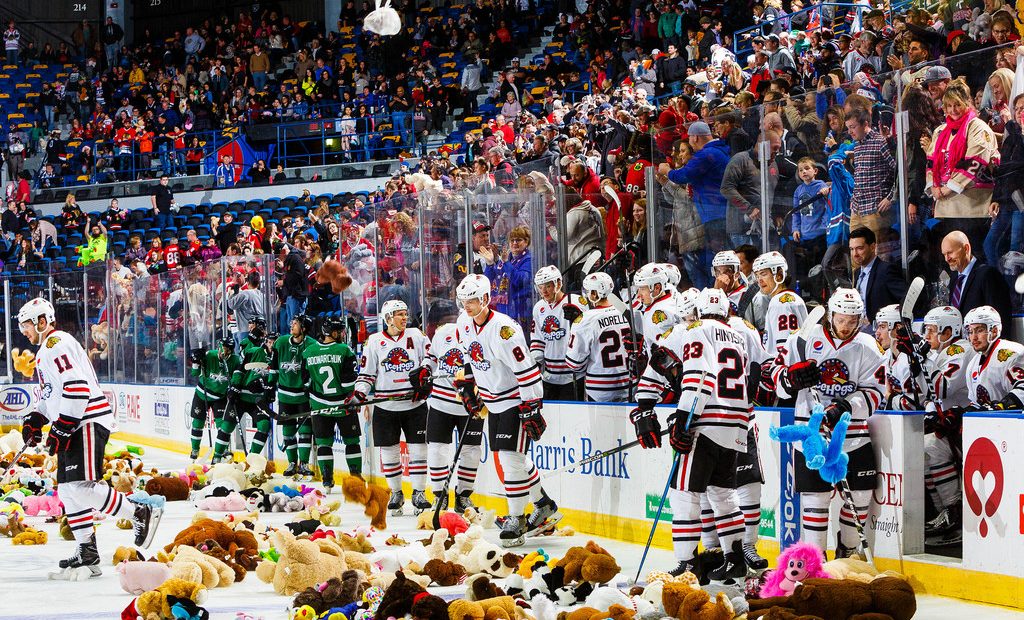 The Rockford IceHogs, AHL affiliate of the Chicago Blackhawks, welcomed a couple of new arrivals to the roster last week. How have these new faces fared so far in the Forest City?

So far, the jury is out; neither has taken the ice since the roster moves were made.

On Thursday, after he cleared waivers, veteran forward Jordin Tootoo was assigned to Rockford. The next day, the Blackhawks recalled Jean-Francois Berube to back up Anton Forsberg while Corey Crawford recovers from an injury. As a result, Hawks goalie prospect Colin Delia was brought up from the ECHL’s Indy Fuel to serve as backup to Jeff Glass.

Rockford had games Friday and Saturday following a blowout loss to Manitoba Tuesday. The IceHogs defeated the Chicago Wolves in overtime before soundly beating Texas to pick up four points on the weekend.

IceHogs coach Jeremy Colliton opted not to use either Tootoo or Delia (or recent addition Robin Press, for that matter) in either contest this weekend. There could be varying reasons for this.

Let’s put the microscope to both Tootoo and Delia and see how they could factor into the mix.

The Hawks re-signed Tootoo this summer but he hasn’t played since training camp. He has spent the bulk of the season on injured reserve.

From an AHL standpoint, Tootoo could add a dimension the Hogs have lacked. Namely, a veteran grinder who has been around the NHL and is capable with his hands once the gloves come off.

Among the questions I have are:

At some point, we should get more clarity as to what Tootoo’s role on the club will be. Best case, he skates frequently, brings some toughness to a very young roster, imparts a bit of wisdom about life in pro hockey and maybe knocks in a couple of goals.

Delia has struggled so far in his first pro season. His lone start in the AHL was a shaky effort as the Hogs lost in Iowa November 9. His numbers with the Fuel don’t impress; a 4.12 GAA to go with a .887 save percentage.

His last action in net was for Indy on November 25. In that start, he gave up six goals to Kansas City. While it is a good opportunity for Delia to get some instruction from the goalie coaches in Rockford, I wonder if Colliton affords him another start.

Rockford has a week of practice and a weekend home-and-home coming up with Grand Rapids. It might not be a bad idea to have Delia watch Glass on the road Friday and get his home debut at the BMO the following evening.

Another start in the Rockford cage for Delia may depend on how long Crawford is out, coupled with how much confidence the organization has in his ability to handle AHL shooters.

Press has not gotten into a game since being recalled by Rockford last Saturday. Neither has forward Radovan Bondra. As I mentioned last week, however, I believe that’s due to an injury Bondra is rehabbing with the IceHogs.

Center Laurent Dauphin did not appear in either game this past weekend. He appears to have been injured in the latter stages of the loss to Manitoba Tuesday night.

Two Out Of Three Ain’t Bad-Recaps

This one’s just as bad as it sounds. You can point to the fact that the IceHogs got 48 pucks to the net, but this was an old-fashioned keister stomp. The division’s hottest team came, saw and conquered the piglets, paced by a J.C. Lipon hat trick.

Rockford was down 5-0 late in the second when Viktor Svedberg got a puck to neutral ice that was won by Anthony Louis. The rookie forward made his way into Moose territory and punched home the only Hogs tally of the night past Michael Hutchinson at 17:22 of the second period.

Jeff Glass was left in the crease for the duration. On a night where Manitoba exploited nearly every Hogs miscue into a scoring chance, Glass was probably the only reason the Moose didn’t reach double-digits on the scoreboard. And with that, let’s just move along…

The IceHogs blew a 3-0 advantage only to prevail in Gus Macker Time thanks to Vinnie Hinostroza’s game-winner.

Tomas Jurco got his sixth goal of the season the hard way 12:32 into the contest. Jurco was providing the screen for a Ville Pokka shot attempt. While trying to avoid the wrist shot, Jurco was struck by the puck (I’ve watched this a dozen times and still don’t know if it hit his head, chest or stick.), which then beat Wolves goalie Michael Leighton to the cord.

About five minutes later, Pokka got one of his own. As he pinched down to the bottom of the left circle, Pokka got a rebound off the end boards of a Robin Norell attempt. He then knocked it past the back door of Leighton for a 2-0 Rockford lead 17:36 into the first period.

The Hogs fourth line stretched the advantage to 3-0 3:35 into the middle frame. Carl Dahlstrom got the play started from the Rockford zone. His pass to Andreas Martinsen was quickly sent to Tyler Sikura and Graham Knott coming across the Wolves blueline.

Knott fed Sikura in front of Leighton, who stopped the initial attempt. In the scrum that followed, Martinsen was able to get the puck across the goal line for his second goal of the campaign.

From there, Chicago chipped away at the three-goal advantage. Brandon Pirri got the Wolves on the board with a power play goal three minutes later. Late in the second, Brett Sterling picked the pocket of Hinostroza at the Wolves blueline. He then scored on the resulting breakaway to cut the lead to a single goal.

Noted Hogs-killer Teemu Pulkkinen tied the game at 15:18 of the third. Pirri set up Pulkkinen’s right dot blast after beating Darren Raddysh to a puck in the corner of the Hogs zone. It now appeared that Rockford’s closest and most bitter rival could swipe two points from the Hogs.

Hinostroza prevented a total collapse in overtime, thanks to some help from Dahlstrom. After passing to Hinostroza at the top of the left circle, Dahlstrom buzzed Leighton. This prevented the former Hogs goalie from getting a clean look at Hinostroza’s snap shot. Rubber and twine hooked up to Leighton’s stick side and all was right at the BMO, save for the point the Wolves received for tying the game in regulation.

Rockford made a clean sweep of the weekend against the Stars, who had won five straight entering the contest.

Texas took a 1-0 lead into the first intermission on a Roope Hintz power play goal late in the opening twenty. Thousands of BMO fans stood by the ready to hurl stuffed animals onto the ice. It wasn’t to be in the first period, however.

The teddy bear tossers would have to wait nearly half the game to send their furry offerings to the ice surface. There dreams were realized when Anthony Louis broke Rockford’s 0-35 home power play slump with a snipe from the right dot. Vinnie Hinostroza provided the primary apple on the play, which tied things up at a goal apiece 8:01 into the second period.

At that point, the cover was blown off of Stars goalie Landon Bow’s net. Moments later, Matthew Highmore took a drop pass from Carl Dahlstrom at he bottom of the right circle. His shot fought it’s way through Bow’s pads and trickled across the goal line at the 9:55 mark.

The Rockford advantage increased to 3-1 late in the second when Louis created a turnover along the right side of the Texas zone. His pass was blasted past Bow from the slot by William Pelletier at the 18:06 mark.

Goal number four came 2:32 into the third, courtesy of some nimble skating by Hinostroza. In a play we’ve become accustomed to seeing, Hinostroza wove around the offensive zone before backhanding a pass to Darren Raddysh. Raddysh came across the goal mouth for a backhander that Bow stopped with his pads. Persistence paid off for the rookie defenseman; Raddysh simply collected the rebound and guided the puck to the back of the net.

Luc Snuggerud got in on the butt-kicking fun 11:38 into the third. The genesis of the scoring play came from behind the Stars net, where Highmore had sent the puck after winning a battle in the corner. Alexandre Fortin passed out to a wide-open Snuggerud in the high slot. The shot was true and Rockford led 5-1.

Former IceHogs forward Mark McNeill scored for Texas at the 14:00 minute mark, but that’s as close as the Stars could get. Tomas Jurco finished the scoring for the evening with a between-the-legs backhand past defensman Gavin Bayreuther and into an empty net in the closing minute.

Hinostroza (first), Louis (second) and Highmore (third) were the three stars of the game.

Rockford will have several days to prepare for a weekend home-and-home with the defending Calder Cup champs, the Grand Rapids Griffins. Friday’s game is in Michigan, while the teams come to the BMO Harris Bank Center Saturday night.

Detroit’s AHL affiliate has had a tepid start (9-10-0-3) to the season, but the Griffins have endured slow openings to dominate the Central Division in the past. The Griffins beat Chicago 5-2 Saturday night to break a five-game losing streak. Like Rockford, Grand Rapids has five days off before dropping the puck Friday night.

The IceHogs are currently 3-0 against Grand Rapids. Rockford owns a pair of 3-2 shootout victories on October 20 and November 18 to go with a 4-3 come-from-behind win at the BMO October 28.

Friday’s tilt will be the first of the season between the two teams at Van Andel Arena, where Grand Rapids has toiled to a 4-6-0-1 record. Last year, the Hogs were 1-4 in that building, for what its worth.

Matt Puempel came over from Hartford early in the season and is pacing the Griffins offense with 17 points in 21 games (7 G, 10 A). Eric Tangradi is a big, physical winger who can fill the net, so he presents problems for Rockford. Tangradi has three goals and an assist against the Hogs to date this season and could well be a factor in how Rockford fares this weekend.

Tyler Bertuzzi is a hard-nosed player who is currently on a three-game point streak. Matt Lorito and veteran center Ben Street are also players to watch.

On the defensive side, Westmont native Robbie Russo has had two successful seasons under his belt with Grand Rapids. He has a pair of goals and seven helpers so far in 2017-18. Dylan McIlrath is a rugged presence on the blueline for whom the Hogs don’t really have a counterpart.

Jared Coreau and Tom McCollom are both familiar faces in net for the Griffins. Its likely the IceHogs could see both goalies this weekend.