Game #22 – And Every Time You Think You Know Just What You’re Doin’, That’s When Your Troubles Exceed – Lightning 4, Hawks 2 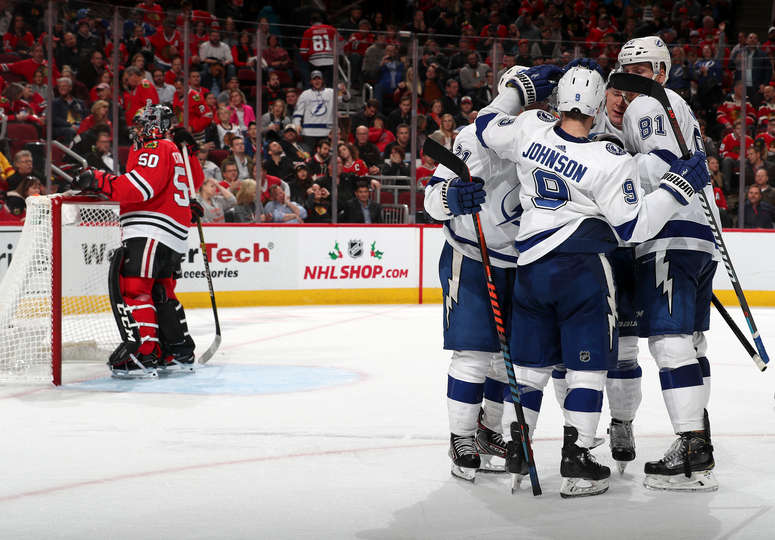 A ho-hum affair through 40 turned into a small heartbreaker in the last 20. The Hawks gave up three goals against a team that ended up skating 10 forwards from the second period on, which isn’t great, but they kept it interesting. Let’s clean it up.

– Sue me for leading with Corey Crawford again, but of all the things the Hawks have done consistently well, goaltending is it. The highlight of Crow’s night came on the heels of Slater Koekkoek (more on him later) not doing whatever it is that Jeremy Colliton thinks he can do. After taking a stretch pass from Mathieu Joseph, Anthony Cirelli played catch with Alex Killorn on a 2-on-1 breakaway against Brent Seabrook. Christ on Earth what a horrifying thought. But Crawford managed to stop both of Cirelli’s attempts, which even a slightly lesser goalie would have been beaten on.

And once again, it’s hard to fault Crow for any of the three goals he was on the ice for. One came against a top-flight power play, and the other two came off bad positioning and turnovers.

– The next time Coach Kelvin Gemstone wants to inexplicably scratch a forward in favor of seven defensemen, he should scratch Alex Nylander instead of Dominik Kubalik. Unless Kubalik was hurt, refusing to serve A Bit of the Kubbly is bad on its own, given what Kubalik can do on both sides of the puck. But what, exactly, has Alex Nylander done lately, other than scoring two garbage-time goals against a backup goaltender? That’s not a hypothetical, because Nylander’s lackadaisicalness led directly to Tampa’s response goal in the third.

Following a failed Maatta clear that unfortunately hit the linesman, Nylander floated to the near boards to cover precisely zero skaters. This of course left a huge lane open for Victor Hedman, whose shot redirected off Cirelli and in. We knew that Nylander was a loaf on the defensive side of the puck, so it’s not so much surprising as it is disappointing, following the Seabrook miracle goal as it did. Surely, whatever system Colliton thinks he’s running doesn’t help, but picking your ass on the near boards doesn’t either. So.

– Piggybacking off that point, this whole playing Slater Fucking Koekkoek for any reason whatsoever horseshit needs to end yesterday. He contributed absolutely nothing positive, which should surprise no one, and was nearly responsible for a Lightning goal late in the second with the Hawks already down. This should be enough to bring your piss to a boil, but it gets even worse, dear reader.

Remember those two huge saves Crawford made that we talked about earlier? You can blame Fetch for that. With Mathieu Joseph beginning the breakout from the defensive zone, Koekkoek hovers in the neutral zone, then points at Joseph to signal to David Kampf to cover him. Yes, David Kampf, one of the steadiest and most reliable defensive players the Hawks have. While Slater MacArthur was giving his directives, wouldn’t you know it, Joseph fired a pass right by him, leading to two high-quality chances.

I don’t need Slater Koekkoek on the ice. I especially don’t need him making suggestions to one of the Hawks’s best defensive forwards about how to play defense. And the cherry on top was that he got playing time over Kubalik. I can only imagine that Colliton did this because Koekkoek was drafted by the Lightning and wanted to let him start against his former team, but that’s fucking stupid. Koekkoek was never a stalwart there. He was an afterthought. That’s why he’s here at all. Great work.

– Olli Maatta even slides slow. He sold out trying to defend Point and Palat’s 2-on-1 following a Kane turnover in the neutral zone and was both too early and too short on the uptake.

– Patrick Kane did keep his scoring streak alive with an assist on the Hawks’s second goal. He also led the Hawks in ice time with 27+ minutes, because Jeremy Colliton definitely knows what he’s doing and absolutely isn’t out of ideas just 22 games in.

– Speaking of Colliton knowing what he’s doing, the first period was chock-full of examples of why his defensive system doesn’t work with this team.

On this play, Palat passes up to Shattenkirk, who drives down the near boards. Palat then picks Dach as Shattenkirk gets around Murphy. Then, de Haan comes out to cover Shattenkirk, despite the fact that Brayden Point was standing right in front of Crawford and also WAS THE GUY DE HAAN WAS COVERING. Why abandon Point there? Is that what he’s supposed to do? If so, is Dach supposed to take Point at that point? What the hell are we doing here?

– Brent Seabrook’s goal was fun. You rarely want to see Seabrook skating below the goal line, but he banked his shot off McElhinney’s back and in. It was a nice sliver of hope while it lasted.

They made it interesting at the end. That’s all we really ask.

Line of the Night: “I love any kind of bar, but the popup ones are fun, too.” –Foley