F*ck You, Chicago. You Took My Only Friend 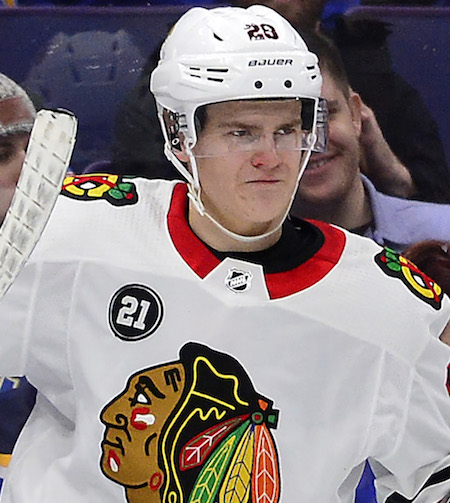 It’s been a banner morning for Hawks and hockey fans, which is ironic because the next time this team raises a banner, we will all be dead from exploding heart syndrome. Before we jump into the meat that is Jokiharju’s demotion, I’d like to give a gigantic FUCK YOU to Pierre McGuire for proving yet again that no matter how terrible you are at everything you’ve ever done professionally, if you’re old, white, and know a few people, you too can be an enormous, bloviating, pontificating asshole on national television and get paid millions to do it. The horseshit he pulled on Coyne Schofield last night is a microcosm of why the NHL continues to be a toilet-tier league. The NHL is for everyone, unless you’re a woman, gay, of color, or end up with a head injury.

Now, let’s talk about the move our resident Brain Geniouses made this morning. Henri Jokiharju was sent down to the AHL on the eve of the end of break. As if the terror of this sideways turd of a hockey team having to play games again wasn’t enough to drive us all insane, we now get to watch as supreme talents like Slater Koekkoek, Carl Dahlstrom, Gustav Forsling, Dun-I-Can’t-Find-A-Fuck-To-Give Keith, and Bottomless Pete, nature’s cruelest mistake, continue to push Collin Delia farther into leather-working as a full-time career.

There’s an argument to be made that moving Jokiharju down is a chance to showcase other players as the trade deadline approaches. I am not going to make that argument, because it’s bonafide, Grade-A horseshit. Here’s the list of players that will now have a chance to play over Jokiharju:

Jokiharju has been playing alongside those top four guys since the beginning, so there’s no reason to send him down to showcase those four. Keith and Seabrook aren’t going anywhere, as Self-Proclaimed Marketing Genius John McDonough continues to insult the intelligence of Hawks fans by implying that they want to pay money to watch legends make them forget how good they once were. Trading Connor Murphy should be considered malfeasance, as he’s been one of the Hawks’s two passable D-men, is still young, and isn’t an anchor on the salary cap. If the Kings can get a first for Muzzin, the Hawks should expect to get at least a second for Gustafsson, but even if you could, can you really see this fucking team pulling the trigger on that with the power play being as effective as it is with him on it?

So that leaves you with a showcase of Koekkoek, who just got traded for Jan Rutta; Carl Dahlstrom, who is about as much of “a guy” as you can be; and Gustav Forsling, who’s basically Erik Gustafsson without any of the offensive output. At best, you’ll get a low pick (think 6th or 7th round) for any of these guys. Stunting Jokiharju’s development by putting him in a league he’s outgrown (yet again) is worth a low draft pick. Fucking wonderful.

It would be one thing if Jokiharju were actually struggling in the NHL, like these water carriers want you to believe. But he really hasn’t. He leads the Hawks with a CF% Rel of 5.5. He leads the Hawks with a 54.1 CF%. Despite the constant jerking around, he’s posted 12 points in 37 games, which ranks him sixth among all NHL rookie D-men for points and fifth among rookie D-men in points per game (minimum 20 games).

When playing on his correct side, his possession numbers are strong: 53+ with Keith, 54+ with Gus, 72 with Murphy (small sample size with Murphy). It wasn’t until the Born on Third Bunch decided to put him on his off side with the worst defenseman the Hawks have—after sending him back to Finland against his will to beat up on a bunch of children he’s already beaten up on before—that his numbers came crashing down. In the limited time he played with Sbarro, Harju had a 36 CF% with Seabrook and a 54+ away from him. This isn’t news: Of all active Hawks defensemen, everyone except Dahlstrom has had better possession numbers away from Seabrook. Just look!

This is the most frustrating part about the demotion. You can showcase the water balloons filled with diarrhea that are Koekkoek, Forsling, and Dahlstrom without demoting Harju BY SCRATCHING THE WORST DEFENSEMAN YOU HAVE. For all those high-falutin degrees Bowman and McDonough are always latently reminding you about (fuck Notre Dame at all levels for all time), that they don’t understand how a fucking sunk cost works is absolutely mind boggling. And as always, kiss my ass with any appeals to “asses in seats.”

Who could have ever imagined that Joel Quenneville—a man whom we’ve all dumped on for not giving young guys a fair shake—would be the one who handled Harju the best? Sending him to Finland was bone-headed, but this is the kind of galaxy brain shit that, had any other team done it, we would giggle at and ask, “Maybe those idiots will take [insert garbage player here] off our hands next.”

The Hawks have nothing to showcase that requires Harju’s demotion. Nothing. Anyone whom they can realistically showcase has already been playing concurrently with Harju. This demotion is simple cowardice. Colliton, Bowman, McDonough: Whoever is making the lineup decisions is too cowardly to tell Brent Seabrook, “We are scratching you because you do not give us the best chance to win.” Because after all, that’s all they’ve been talking about since the beginning of the season: They expect to win, they expect to be a playoff team, they expect to pull within .500, they expect to scratch for every single point.

Demoting one of your top two defensemen is not how you do any of that. All it does is fuck up the development of a 19-year-old part of the future who had the audacity to play fairly well when given the chance. He’s no Rasmus Dahlin, but no one asked him to be that. All we ask is that you give him 20 minutes a night (he’s averaged about 17 since Colliton took over and about 14 since coming back from Finland) and play him with someone, anyone, who complements his puck-moving, strong-vision style.

Instead, they’re sending him down to a league where the only thing he’ll learn is that the AHL is rife with guys who, five years from now, will specialize in getting kicked out of bars for poking strangers and screaming “I PLAYED PROFESSIONAL HOCKEY” before headbutting them when they say, “Sir, I don’t know who you are please stop harassing me.”

My, my what a mess we’ve made.