How to Not Be a Mansplainer: Sports Edition 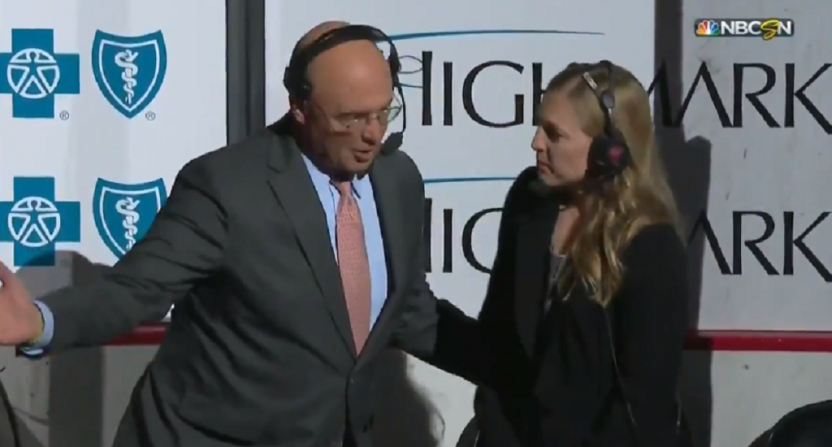 Today, hockey Twitter responded with justified derision of Pierre McGuire mansplaining hockey to two-time Olympic medalist Kendall Coyne Schofield during her broadcast debut on Wednesday Night Hockey. Coyne responded brilliantly, with the calmness and confidence of someone who knows their shit, and McGuire…well, he didn’t exactly apologize so much as get in the ballpark of, “everyone called me out for being an ass, whoops.” And as most women are all too well aware, often that’s the best you’re going to get in terms of an apology.

And now, there’s the inevitable Twitter backlash of men who can’t believe an incident like this would be put in gendered terms and are horrified—HORRIFIED—that a man’s behavior or words could be criticized in such a way or shown back to him as an example of being foolish. It’s depressingly familiar, but I’ve got good news, guys: only YOU can prevent mansplaining sports! Here’s how:

1. Don’t defend Pierre McGuire. Let’s start with this immediate situation because I’m getting pissed with this backlash. Yes, McGuire says dumb shit to everyone every day. It’s literally what he does for a living—spout off dumb bullshit about the record a guy had as a Bantam in some bumblefuck Canadian backwater. But just because he does that doesn’t mean that THIS dumb shit is no big deal. He was an asshat to a woman eminently qualified to be taking the career step she was taking. Being a condescending dipshit in this very public forum isn’t wiped away just because he’s normally irritating and full of useless information and likely grossly overpaid for it. Accept that, and move on.

A lot of this comes from embedded cultural attitudes that take a really long time to change (read, calm the fuck down, just hear me out). Girls are discouraged from being “tomboys” and are bombarded with overtly feminine toys, imagery, and anything colored pink literally from before we exit the womb. You can scoff, but this means that boys are taught to talk to each other about sports and play sports together, and that by and large, girls are still in a transition to a time and place where sports and athleticism are viewed as equally valuable in them as they are in boys. It’s changing, yes, but it’s a slow process and for those of us older than just reaching voting age, this was a much less prevalent mindset when we were growing up.

What does this mean? It means it’s tough to overcome that hard coding of “TALK SPORTS WITH DUDES” attitude that’s been drilled into you since childhood. It means that when you take a date to a game, you may assume she doesn’t know what the lines on the court are for, or why a batter bunts, or why anything is happening in a certain way. It means that when women describe why a zone entry failed, or why a screen pass was a terrible play call on a third and long, or how a pitcher didn’t keep his fastball down, you’re more likely to stare blankly than you are to respond thoughtfully, because you can’t compute that a woman just said that.

If you want to avoid mansplaining, you have to start from the premise that a woman—whoever it is, a rando, someone you know, whoever—understands the basics of the sport taking place in front of her, whether live or on TV. She may not be an expert, but then again, she might be. You probably don’t know for sure (and if you do know, like McGuire did with Coyne, you’re a fucking moron), so operate from a place of respect. Sports permeate our culture and more girls than ever are playing, so it lowers your chances of making an ass of yourself if you assume knowledge, not ignorance, in your female friends, relative, colleagues, and fellow bar patrons.

3. Would you say that to a guy? And that brings us to the other side of that gender stereotype situation I described. It’s true: a lot of women don’t follow sports. No one is more painfully aware of this than me because honestly, I’ve only had a handful of female friends who enjoy watching major sports. A lot of that is thanks to a lack of interest, a lot stems from those same attitudes and behaviors hard-wired when we were kids. They reinforce each other.

So I get it, maybe a woman in your life really doesn’t understand why a third down is nerve-wracking, or why one hockey team has fewer guys on the ice for a time. When that happens and you go to open your mouth, ask yourself: Would I say this to a guy? Would Pierre have ever told Mike Milbury which benches the Lighting and Penguins were on? No. If your “explanation” to a woman is not the same as what you’d say to a dude who isn’t familiar with the sport at hand, you’re mansplaining. Full stop.

And that’s the thing—when #notallmen dudes get all up in arms and when Twitter backlashers get all self-righteous, they’re overlooking the key thing feminists want: to be treated equally The actual definition of feminism is the belief that men and women are equal. All other connotations are the result of misogynists creating false interpretations to justify their actions and attitudes. Yes, it is. (Come at me, I stand by this.)

So if you speak to a woman about sports the same way you’d speak to a guy about it, you won’t be mansplaining. You won’t be speaking with the inherent condescension of a response tailored for an audience you assume is unfamiliar (well, maybe you will be if you’re a condescending jerk to start with). Instead, you’ll be providing information like a normal human being. If you get technical and your female listener doesn’t understand, she’ll do the same thing a guy will: ask a follow-up question. And then what you have is a conversation, maybe even an opening of a common area of interest. But if you dumb down an answer (or an unsolicited statement) simply because you’re talking to a woman, you automatically sound foolish.

Because here’s the kicker—you probably aren’t that much of an expert, either. I’ve had guys plead for me to “make her understand football” in reference to their wife or girlfriend. (I field this question a lot but we’ll keep this example to football, far and away the biggest source of these requests.) My response is: explain to her the system of downs. When she understands the system of downs, the game makes sense, and she’ll understand what’s going on, why it’s exciting, all of it. I’ve given this advice more times than I can count. And without fail, the male friend or acquaintance gets a blank look, mumbles something, and walks away. Every. Single. Time. Know why? Because they don’t understand the system of downs. Or at the very least, they have no idea how to describe it.

So dumbing down strategy or play calling for a woman may seem easy, but would you phrase it that way to another man? No, because it would be obvious to him that you’re bullshitting and didn’t know what you were talking about. Guess what? It’s obvious to women too.

Like so much else between us all, when it comes to talking sports, be yourself. Don’t change what you would say based on the audience. Answer honestly about what you know, and be truthful about what you don’t know. Start from a place of trust, and believe this person may know more than you expected, despite having a vagina. Because we’re gonna figure you out either way.