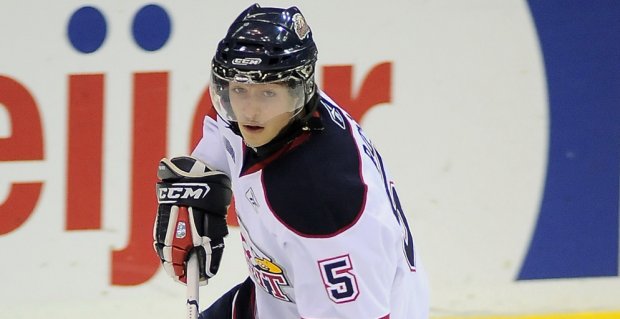 That time again. Let’s go around the continent to see which Hawks prospect got up to what. Because it’s basically all we have to talk about that isn’t a bunch of finger-pointers and name-callers and I swear to god when I feel like I’m significantly more mature than two groups of people, you know you’re in fucking trouble. Sorry, bit of a rant there. Let’s move on.

As always, lets start in the Q with the Victoriaville Tigres. Yes, you have to put the r before the e when talking about these Tigres. Because when you offend the Quebecois, you won’t believe how annoying it can be. It was just another ho-hum weekend for Phillip Danault, with one goal and four assists and a +3 in two games. That gives Danault 25 points in 14 games in the Q this season, as Mark McNeil, Brandon Pirri, and maybe even Marcus Kruger begin to nervously look over their shoulder. But as we may be learning with Brandon Saad, the jump from junior is not an easy one. Danault is currently the third-leading scorer in the Q, though he’s played two more games than Mikail Grigorenko who will shoot past him when he makes that up.

His teammate, Brandon Whitney, only started one of those games and gave up 3 goals on 25 shots. His GAA remains well over 3.00 and SV% under .900.

Meanwhile, over in Rouyn-Noranda Dillon Fournier had two assists in two games and somehow managed to be a +2 in those tilts where his team gave up 11 goals. That can’t be easy.

Ready to go to Ontario? No? Well who ever is? Anyway, in London Alex Broadhurst had four assists in three games to give him 11 points in 11 games (4 goals). In Saginaw, Garret Ross had a quiet weekend with two assists in two games. He’s got 16 points in 12 games, evenly split between goals and assists. Apparently he got the water bottle that Brandon Saad was using last year.

Right, out to the hicks in the WHL. Mac Carruth only had one start, holding Seattle to one goal on 23 shots. In three games Carruth has only surrendered three goals. Yes Virginia, that’s a GAA of 1.00. But say it with me now….”Sample Size!”

Ok, who’s ready to drop down to the NCAA here in the States? You liked college right? I mean I didn’t all that much but you probably did. In fact, why don’t we start where I went to school and just down the street from where I lived on Comm. Ave my senior year, Boston College. Kevin Hayes had a goal and two assists in two games against Umass and Northeastern. He then probably went on to bang some 5-9 blonde, because they all are at BC.

Ok kids, now over to the WCHA. Not much going on here. Dan Delisle (who will never matter for the Hawks organization as they look to purge every Tallon pick they can) had a goal for UMD. The rest of them? Eh, I’ll wait until they make it clear they matter.

One last jump over the pond and then we’re done. Wait, we don’t have to because Teravainen broke a finger and is out.

All right, everybody make sure you drink plenty of water and don’t go to sleep immediately. Probably because you’re at work and your boss wouldn’t like that.