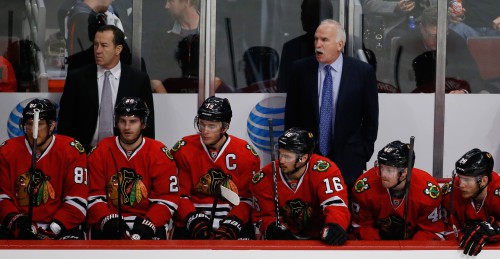 I would guess that a lot of times, you sign on here after a game expect us to reveal some nuanced view of the game or point out something you may have missed that led to the result or to at least dig deeper than what you’ll get in the mainstream. Tonight is not one of those nights.

This one’s on me and McClure. McClure in the preview and me on the front page of the Indian didn’t spare any words shitting on Varlamov, and then pointing out that probably set us up for a 45-save shutout. Well, reverse the numbers there and that’s what we got. Pat and Eddie can bitch about that bitch Annette Frontpresence all they want, but when you toss 54 shots on net you’re not going to have someone in front for all of them. I’m sure when the shot charts to this one are available, the Hawks will have as many from in close as they have in any other game.

The Hawks had been playing with fire for a while now, consistently falling behind in games and then relying on their supreme offensive talent to continually pull their ass out of the well (WAY DOWN THAT WELL!!!!). You can only do that so often, and getting 54 shots turned right back at them is probably exactly what the Hawks deserve. And hopefully what they need to snap back into attention when games actually start instead of when they feel like strolling in.

But that there doesn’t mean there aren’t other things to address, so let’s do that.

-The first thing to address, and it’s one I’ve been harping on all season and looks like it just might be coming to a head, is Johnny Oduya and whatever it is he’s been attempting to do out there all season. He misplayed the rush for the Stars first goal on Sunday, and decided to raise the ante on himself tonight by getting walked by John Mitchell. That’s John Mitchell. Not Duchene, not Landeskog, not MacKinnon. John Mitchell. I don’t see how Oduya could have played it worse. He gave up his blue line, his gap was awful, he then crossed over which is always death for a d-man playing one-on-one.

He wasn’t much better on the second goal, falling asleep to the situation and getting scorched by MacKinnon on the race for the puck. And this really has been happening all season.

I don’t know if he’s pacing himself, or playing until two straight Junes plus Olympics has caught up to him at 33, but it’s an issue. And it’s hard to see how playing 40 more games before we even get serious is going to make it better.

Q has a decision to make here, and Stan probably does too. You could throw Seabrook and Keith at the tough assignments again, but Oduya is not going to make up the drive you will lose when Keith can’t consistently push the play against better opposition. They’d have to get creative to make a deal for someone, say Andrej Sekera or Jeff Petry. It seems like an awful lot is being pinned on the return of TVR, and however promising he has been we’re talking about a kid with 15 games above college who’ll have missed three months of action.

Don’t fool yourself. This is the most serious issue facing the Hawks before the playoffs. Because no matter how you dole out the assignments, most teams the Hawks could see in April and May can sport at least two good scoring lines and Bangkok Dangerous is going to have to hold someone down. He’s not getting bailed out by Crawford now as he was earlier in the year. Itchy itchy.

-On to Crawford. I threw this out there in the Indian tonight, and I’m not saying this is the case but just something to think about. The Hawks kind of hung Crow out to dry with that lost staircase battle, something they really never do with injured players. They didn’t do much to conceal how it happened, and then Crow got to face the press himself to explain it, which I can’t ever remember happening. There was a method to it for sure.

So I wonder if Crow isn’t putting more pressure on himself, knowing that the team was/is pissed at him after being somewhat embarrassed by them. It sure looks like Crow is chasing the game. I don’t know that much about goalie technique, but you know when Crow is relaxed, and coming five feet out of the crease or losing his net consistently or making misplays with the puck is not the hallmark of a relaxed goalie.

He also appears to have some issues moving from his right to left, though that only left MacKinnon a nun’s treasure amount of space to find, which he did because he’s really good. Is the ankle all the way better?

-Tonight’s Teuvo update: Spent a lot of time playing wing, didn’t he? Teuvo was shuffled all over the lineup to not much effect. I find it hilarious that the organization has gone well out of their way to stress that Teuvo is a center and that’s where he will play, and it took two games for the coach to toss him out at wing. Stick him on the third line with whoever, and leave him be.

-David Rundblad was the most effective d-man tonight. He’s not going to be a star, but I will say he’s got confidence with the puck and isn’t afraid to to try and get around a man to either open up a shooting lane in the offensive zone or open a passing/skating lane to get out of the defensive one. Now if he only had slightly better wheels to really make it count.

-Way too much hoopin’-and-doopin’ tonight, with passes through the legs and cutesy bullshit opted for instead of the simple play, and a lot of it was coming from Marlboro 72. Still, 54 shots so it couldn’t have been that destructive.

-I’m hesitant to address this, and maybe it should be in its own post. There’s going to be a lot of conjecture about Cliff Reif over the coming days, which won’t change the sadness or confusion of it all. You’ll see a lot of calls and pleas for people with depression to seek help. But as someone who has gone through this recently in a much closer manner than most or I would have ever dreamed, the thing about depression is it’s far from that simple. Either a person doesn’t think anyone cares or they don’t think they’re worth it or various other reasons those of us not dealing with such a thing could ever understand. That doesn’t mean there’s no hope for those who need it most, but at times like this I think those on the outside get slightly on the callous side by saying, “seek help.” All you can do for someone who is suffering like that is be there for them, provide the rope I guess. Sometimes they do. Sometimes sadly, they don’t.

And I think that’s all I want to say about it.