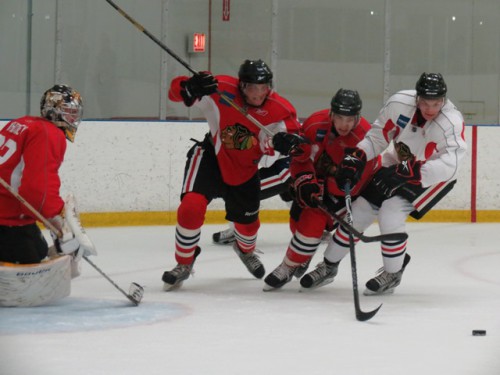 The first team on the ice this morning was split up like this:

The drills were more intense today and featured more rushes and board battles. Due to those drills, the tempo of the practice was more fast-paced than the previous day. It also allowed the players to show off more of their skills.

Everyone started off on the Struggle Bus this morning though—even skating coach Kevin Delaney. While showing the campers how to do a drill, he fell down twice. Many of the players also had problems staying on their skates, but once the adrenaline started running, things got better.

Chris Calnan was more noticeable today than he was yesterday. He utilized his speed to his advantage and was able to display his good shot. Travis Brown wheeled around the rink very well with his smooth skating. Stephen Johns once again stood out from the crowd. He got involved physically whenever he could; one big hit of his came when he stepped up at the blue line and hit free agent invitee Cohen Adair. The 6-foot-4, 220 pound Wampum, Pennsylvania native was also very good defensively with good gaps and a keen ability to break up an attacking forward’s momentum. Mark McNeill was solid once again, despite a scary moment. Early in the day, he took a shot off of his leg (I couldn’t tell if it was the ankle area or higher up his leg) and went down. He got up and skated around gingerly, but then was helped to the dressing room by two trainers. About 5 minutes later, the 6-foot-1, 214 pound center was back on the ice and participating in drills. He was skating just fine, like nothing had happened, but then there was this report after practice: 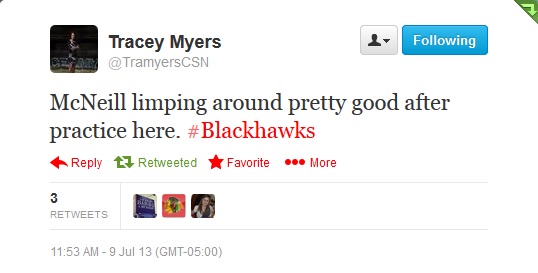 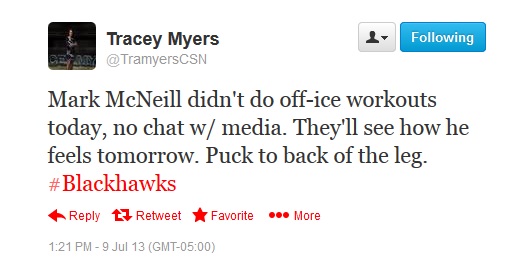 The biggest player at camp, Viktor Svedberg, skates and stick-handles very well for a large man; the Goteborg, Sweden native is 6-foot-9 and 223 pounds. For Rockford IceHogs fans, that is good to hear considering he signed an AHL contract for the upcoming 2013-14 season. Anthony Louis also exhibited good stick-handling in drills, as well as good speed. The Winfield, IL native is a fast skater. Another name that IceHogs fans should be on the lookout for is Wallingford, Connecticut native Pat Mullane. He looked very solid during practice. His speed and good shot were very evident. 19 year old defenseman Dillon Fournier also showed off his skating ability today—he was one of the smoothest skaters while the guys had to stick-handle around cones a couple of times before getting a shot on net. Netminders Brandon Whitney, Jackson Whistle and Matthew O’Connor all were solid in net and made some good saves.

The second group was delayed from getting onto the ice for a few minutes due to ice conditions. After the ice was re-surfaced, it looked terrible. It was over flooded and the puddles weren’t drying fast. The Zamboni dry-cut the ice and it was deemed fine, but it was very sloppy and choppy. The hot and humid conditions outside the building didn’t help anything. Group 2 had to battle through the ice conditions, but they seemed to manage it well enough.

Here’s the break down on how group 2 was split up:

MIA:  Antti Raanta (Assat Pori; G; injured—and won’t be on ice at all this week) 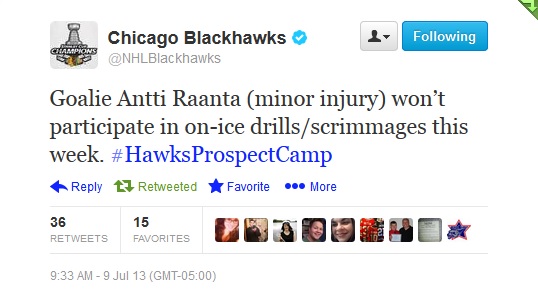 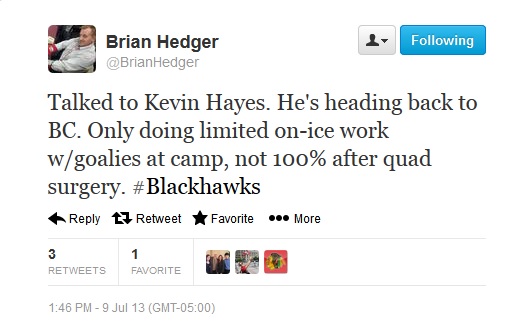 Robin Norell has stepped off of the Struggle Bus, folks. He looked much better in today’s practice in all areas including passing and skating (he’s very fast). Phillip Danault continued to be a work-horse. His intensity was kicked up a few notches from yesterday (if that’s even possible) and he was giving every drill his all, which is normal for him. He’s very strong on his skates and works hard along the boards. Dario Simion had a sweet moment today when he found a hole in the defense, cut in, took a pass and roofed a shot over Mac Carruth’s glove. John Hayden continued to shine today. The 6-foot-3, 210 pound U.S. NTDP alum has a nose for the net, good hands and good speed to his game.

After the session ended, Mac Carruth, Kent Simpson, Brandon Whitney, Matt Tomkins, John Hayden, Tyler Motte, Justin Holl and—wait for it—Kevin Hayes were getting additional ice time with some of the coaching staff for a good chunk of time.

I’ll have that covered once again. If you want updates from the scrimmage, follow me on Twitter:  @kimwrona7.