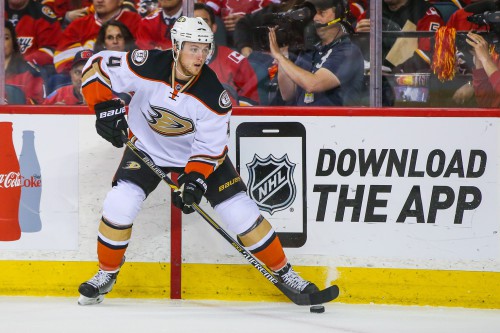 The Conference Final is where it feels like the warm up acts are off and the headliner has taken the stage It’s serious now, maybe because you’re halfway home and each successive win brings you closer to the end than the beginning (which I guess is always true but now you’re over the line). There’s only one game per night, usually, so you have the attention of the whole hockey world throughout the series. Even though this is the fifth time in the last seven years the Hawks have gotten this far, there’s still a tinge or an uptick in the excitement when they do. And for the fourth straight trip, they’ll be heading back to Cali.

What will they find when they get there? Today we start to find out…

For the first time the Hawks won’t face a goalie with some revival story, and one with just about no hype. And because of that in part there isn’t much to write about Andersen. He’s been solid for the Ducks for two seasons now, carrying a career .918 SV% which is just a tick over league average. He’s a big boy at 6-3, so he’ll cover a lot of net and he’s pretty athletic though not Rinne-athletic. He got hurt in last year’s playoffs and even when he did play the Stars and Kings kind of perforated him. He hasn’t had much to do in these playoffs, as the Jets and Flames only made him make more than 30 saves once in nine games. Gonna go out on a limb here and say he’ll have to do that more than once against the Hawks.

Ah, the Hawks. They haven’t been so kind to him in his short career. He’s only made two starts agin’ them, and lost both, giving up seven goals (all at even strength) on 70 shots. At the end of the day, Andersen is not going to win this series for the Ducks, but he probably won’t lose it either. I’ll amend that to I’ll be shocked if he does win the series for them.

If things do go sideways for Andersen, there’s every chance John Gibson could get a look. I still think he projects as the better long-term prospect, but clearly the Ducks haven’t decided that. He shut out the Hawks in October, and while just about the same size as Andersen he’s just smoother. The problem is he can’t keep body parts from falling off of him and hasn’t gotten a sustained run in net. Calling it now, he’ll make at least one appearance in this series.

Do you want to know why we’re so bullish about this series? It’s right here. The biggest weak point of the Ducks is their blue line. There is no Ryan Suter here. There is no Seth Jones here. I’m not even sure there’s a Roman Josi here. There are going to be long stretches of games where the Hawks are going to do as they please in the Ducks’ zone, and this collection of jokers and punters is going to helpless to do anything about it. Let’s run through it:

I guess? This is probably the top pairing unless Fowler and Despres is. And because I can’t name it, that probably means they don’t have one. There was a time when Beauchemin was a top of the line ass kicker, and that’s when he was playing with Chris Pronger in his first go-around with Anaheim. Well, it’s eight years later now, he’s 34 and even less mobile than he used to be and he wasn’t all that quick to begin with. The idea of him trying to keep up with Saad or Sharp is farcical, which is why he’ll try and keep things along the wall where he does have an advantage. He’s still got a nasty disposition and the Hawks will pay a price for engaging him down low. It’s when they escape there with possession that the problems for him are really going to begin.

Hampus! Hampus! has a big future ahead of him. A fluid skater with great vision up the ice, he’s probably a top pairing puck-mover in the future. But the future is not now, and he can get rocked in his own zone. At 6-3 and 205 he still hasn’t quite learned to play to his size, and seeing as how he’ll be on the side where Marian Hossa lives, that might be an issue. When the Ducks have the puck he’s a real danger though, and the Hawks will have to keep him from getting things going or track him while he joins the rush where he can create real havoc.

This really should be considered the top pairing, though it hasn’t played as many minutes as the one above it. It does have the mobility to somewhat contend with the Hawks’ speed and attack. At least in theory. I never know what to make of Cam Fowler. You look at him and you’re sure you’re looking at a Suter-type but with more offensive upside, because all the tools are there. And then you see he ended up a healthy scratch in March because he was so awful. His awareness in the neutral zone and his own can go daydream at times. He’s not small, but another player who can get tossed around. And if he’s drawing the top assignment instead of Hampus! Hampus!, he’ll run into the same Hossa-shaped problem (maybe this is why Hossa has kicked a hole in the Ducks possession-wise the past two years, hmm?).

I still have a hard time accepting that Bob Murray can ever make a good trade, or know how to use a fork, but getting Simon Despres for the rock-headed Ben Lovejoy was one. Lovejoy would have drowned in this series by Game 3, and the far more mobile Despres has the tools to survive (which makes you wonder why the Penguins didn’t want him when their entire top four was hurt, but that’s not a pool I have the patience to wade into today). I don’t know that Despres does anything particularly well, he’s just solid in most every way and another big body at 6-4. That’s the one thing the Ducks’ defense has going for it is that it’s pretty huge. But then, so’s the Blues’ defense.

YA HA TIME!! With the Hawks rocking perhaps the most depth at forward they’ve had in at least five years, teams simply cannot hide their third pairing. Ask Matt Dumba. And this one is going to have different organisms latched onto it by the end of this series, subsisting on the various waste and fluids that is leaking out of it.

Vatanen is the definition of a cowboy, in that he’s really good in the offensive end and on the power play but so aggressive that he either gets caught and leaves odd-man rushes behind him or he’s running around his defensive zone trying to make things happen as if he were simply made of Adderal. He’s undersized as well, so the bigger Hawks forwards can make him work along the wall. The thought of him having to face down any of the Hawks top six at the United Center should leave you frothing at the mouth.

I could try and find eight different ways to say Clayton Stoner sucks, but it won’t be as effective as just saying Clayton Stoner sucks. He’s Beauchemin without any of the puck-skill, so he tries to amp up his supposed “rugged edge” which is just going to result in Hawk power plays (not that that will mean much to anyone). This is the Clayton Stoner that ran around trying to punch everything last spring on the Wild, and when the Hawks bothered to skate an actual line at him instead of the corpses they had lying around, they buried him. Andrew Shaw and Marcus Kruger should have a field day with this lot, and if they don’t than Teravainen and Sharp certainly will.

There’s a reason the Hawks took 57% of the attempts in the three games with the Ducks this year. You’re looking at it.