Believe it or not, tonight already marks the halfway point of this abbreviated NHL campaign (Thanks Don and Gary!). Fittingly, tonight’s opponent, the Colorado Avalanche, is the last one the Hawks have yet to face so far in the intra-conference only schedule.

The Avs come into tonight still kind of a mess, besieged by injuries and contract nuttiness to this point. They’ve lost 5 of their last 6, taking points in 3 of those losses, and only emerging victorious against the equally silly-assed Calgary Flames in comeback fashion. That comeback came during the same day as the conclusion to the Ryan O’Reilly contract saga, which finally came to its predictably wacky conclusion with ROR getting two years (actually one and a quarter) and the money he wanted. Whatever boost that signing was supposed to provide was short lived however, as the Avs turned around and lost to the Jackets in OT, and then last night to Scum 2-1.

Thus far in 2 games, O’Reilly and his stupid new number 90 have been held scoreless and are a -1, so it’s not as if he’s making the sudden impact on the ice that GM Greg Sherman envisioned. And while the Avs don’t lack speed and firepower up front, it’s kind of headed in all directions at once. Former Hawk also-ran and now $4.5 million dollar man P.A. Parenteau paces Colorado in scoring with 19 points, tied with the annoyingly smirking Matt Duchene for the team lead. But after those two and the reliable-but-overpaid Paul Stastny, the scoring punch kind of falls off the table. The Avs are 24th in scoring overall (2.38 goals for per), and while part of that has to do with O’Reilly’s holdout and Gabriel Landeskog’s scrambled brain, they suffer from a similar affliction as the Oilers, where there’s just not a lot of substance among the forwards to compliment all the flash at the top end. David Jones has been a particular disappointment after getting paid over the summer, but it’s assured that both he and Landeskog will factor in at least one or two pecker-slap goals this evening, as is their way against the Hawks.

On the Avs blue line, Erik Johnson’s absence has left a gaping hole, with nice-part-but-who-cares Jan Hejda now the defacto #1 defenseman, and being asked to do far more than he should be. Old friend Shane O’Brien is still in maroon, and that’s always fun. Johnson’s presence or not, this corps still allows just under 31 shots per game in front of tonight’s starter Semyon Varlamov, whose .910 save percentage looks downright heroic some nights given the Avs’ defensive zone coverage.Varlamov probably wasn’t worth the first round pick the Avs gave up for him, but he’s certainly capable of stealing a game even when under duress.

As for our Men of Four Feathers, the run they’re on is now starting to border into the absurd, but no one here is arguing with the results. There are still some small nits to pick, however. As was noted last night, Dave Bolland’s return resulted in Patrick Sharp not seeing a single attempt at the faceoff dot, and Sharp’s now won 60 percent of the 40-odd faceoffs he’s taken. While it’s a small sample size, the performance gap between the two should at least warrant a trial period of Sharp taking some of Bolland’s draws if moving Sharp to center is absolutely out of the question (though we wouldn’t know because the question hasn’t been asked). The Hawks will need every advantage they can get at the dot tonight (and Friday), as the Avs top 3 centers in Duchene, Stastny, and O’Reilly are all well over 50% for their careers in the faceoff circle, and that could lead to a lot of chasing (particularly for the Bolland line) given the overall speed of the Avalanche.

There’s no word at press time whether Michael Frolik has gotten over his case of butt rot from yesterday, but if he’s available, expect Brandon Bollig to sit. Having Jamal Mayers available to take a draw over Gorilla Salad would be nice too, but there’s no way he’s going to find himself scratched short of pissing on Q’s italian loafers behind the bench, and even then it’s a “maybe”. Ray Emery goes for the Hawks tonight in net, and his hips will once again be put to the test by an Avs squad that can get him moving laterally.

For all the silliness and mediocrity the Avs have gone through this season, they seem to be quite confident in being able to knock the Hawks off the run they’re on. And they have no reason not to be, as Joe Sacco’s Avalanche have given the Hawks fits with their speed the last two seasons. But this is an entirely different flavor of Hawks team this year, and these two games should reveal a lot about the positional discipline of the Hawks. Should the Hawks get a lead, sitting back in a 1-2-2 will spell doom against the Avs. Keeping the Avs moving and on their heels keeps them from attacking. A moving target is always hardest to hit, even one as big as the Hawks have on them right now. Buckle up. Let’s go Hawks. 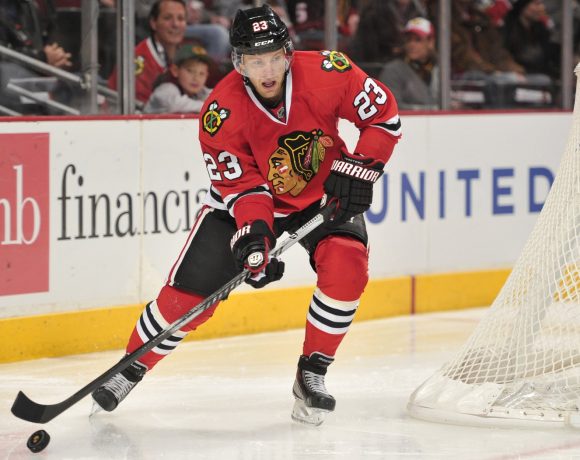 It Doesn’t Matter If You Think You Might Be, You Are: Hawks at Blues Game 2 Preview/Babies On Spikes Shower