Angry at Numbers: Murphy Go Down on the Merry-Go-Round 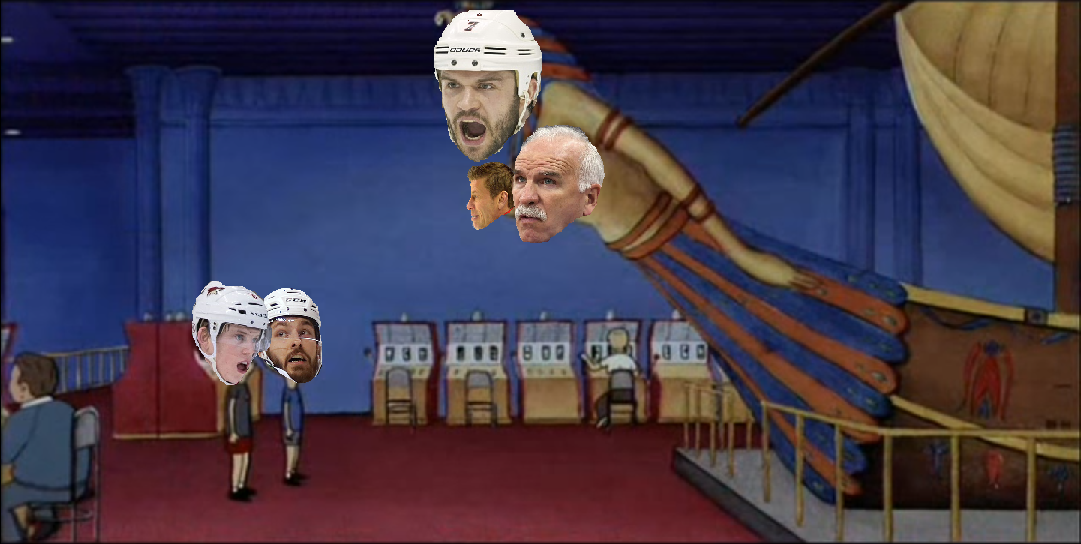 This post is not a referendum on anyone’s play last night. Last night was a decent effort by most, muddled by the NHL’s complete refusal to clarify what its own rules are, and peppered with the missed chances, lack of finish, and poor shooting percentages that have become the norm around here. What this post aims for is to figure out why guys like Kempný and Murphy seem to get scratched for no reason that makes sense, while our favorite whipping horse gets the ice despite his performances.

If you look at just last night’s numbers, it might make sense. Seabrook had a good possession game. But he also took a confounding boarding penalty that put the Hawks 5v3. He also couldn’t chase down Sean Monahan with the goalie pulled, allowing him to slide home the dagger. But those kinds of things are exactly why having Murphy sit yesterday and Kempný sit the game before seem so frustratingly random. If either of those two had been in Seabrook’s position, either on the penalty or the Monahan goal, is there any doubt that we’d need police dogs to start the search for them?

Now, the organ-I-zation wants you to believe that Murphy was “sick” last night, which explains why Crawford isn’t currently skating, why they pulled Toews off the ice immediately after his dizzy spell in 2012, and why they aren’t mentioned in the Montador suit. Because player health has been a top priority for this organization. You know how this looks by now.

While I may be an angry man, I can also be a reasonable man. So I decided to parse out some numbers to see whether Kempný or Murphy really deserved to sit over Seabrook. I looked at a few things over the last five games to see which trends I could snuff out. These stats do not include yesterday’s game.

I looked at each player’s total time on ice and the lines he played against primarily in each of the last five games. Then I compared his CF% against just that line to his total CF% for each game. Finally, I looked at the percentage of faceoffs he took in the offensive zone during the game, and logged how many goals he was on the ice for, just for fun.

First, I looked at Kempný.

Looking at the first two games, the raw numbers suggest that Kempný wasn’t playing that great. His full-game possession shares were below water, despite starting in the offensive zone a vast majority of the time. During these two games (and the next game in Nashville), Kempný tended to play most of his time with some combination of Sharp/Wingels–Anisimov–Hartman, otherwise known as the Smykowski line. He did well with them in Toronto (getting crushed behind the Toews and Schmaltz lines) and horribly in Detroit.

But look at the Nashville game: Against the Turris line—which, aside from Hartnell, is usually Nashville’s second line—he posted a 57+ CF%. What dragged him down was the Johansen line, and he was far from the only Blackhawk to deal with that problem. Recall that Quenneville purposely kept Toews away from the Johansen line as much as he could on the road, and that the Johansen line had a collective 60+ CF% for the game. It’s hard to be upset about what Kempný did there, especially with the shit zone starts.

The fourth game against Vancouver was a relative rebirth. He played most of his time against Vancouver’s top line and completely skulled them. The poor zone starts had little to no effect on his possession share, as he and Murphy led all Hawks D-Men in possession. Additionally, this was a game that saw Kempný backing up DeBrincat–Toews–Duclair just about as often as he did Wingels–Anisimov–Hartman.

After that game, by far the best of the bunch, Quenneville scratched Kempný. He was on the ice for one 5v5 goal through four games.

And what of Connor Murphy, the most consistent Hawks D-Man over the last few months?

~ = Tkachuk–Backlund–Frolik each had a CF% of 50+ against ALL Hawks except Jurco, Gustafsson, and Seabrook

Like his partner, Murphy had a rough go of it against Toronto. The Bozak line pushed him crotch-first into the corner of an end table. But the other line he played against at about the same rate of time, the Komerov line, got slimed by Murphy, with Murphy coming out with a 75 CF% against them.

He turned it around in Detroit, pasting the Larkin line despite a huge lead. This may seem odd, since he and Kempný were paired up throughout the game, but I think there’s an explanation. While both Kempný and Murphy found themselves behind the Smykowski line most often, Murphy backed up the Schmaltz line as his secondary forward line, whereas Kempný backed up the Kampf line. Given how Q tends to use those two lines (Schmaltz’s in the offensive zone as much as possible, Kampf’s as a Kruger Lite), it might explain the difference.

Murphy fared more poorly overall against Nashville, but for the same reason as Kempný: Johansen’s line ate everyone’s lunch. And when you consider the putrid offensive zone–start rate and the opponent, that game makes more sense in terms of possession.

Like Kempný, Murphy had his best game against Vancouver. But then Calgary happened, which saw Murphy get creamed by Calgary’s 3M line to the tune of a 17+ CF%. And while the overall CF% isn’t pretty either, especially considering the decent offensive zone starts, it bears mentioning that the 3M line had at least a 50 CF% against everyone except Jurco, Gustafsson, and Seabrook.

There’s no doubt Murphy had a bad game in Calgary, but relative to the team, it’s not as bad as it seems. It’s certainly not scratch-worthy in my view, unless you’re blaming the game-tying turnover entirely on him and believe that’s a scratchable offense. That seems a bit too punitive to me, but Murphy’s been Darkness to Q’s Rick James since he got here.

He was on the ice for two 5v5 goals through five games, and was “sick” last night (OF DIS TEAM, YA KNOW WHAT I’M SAYIN’?).

And then, there was Seabrook.

This is where it gets frustrating, because none of Seabrook’s numbers justify sitting Kempný or Murphy over him. Against Toronto, Detroit, and Vancouver, Seabrook had decent-to-plush zone starts and garbage possession. In the one game he played the fewest minutes of any D-Man, the Hawks dominated. And if we’re going to claim that Murphy should have been scratched for Calgary’s game-tying goal (he shouldn’t have), then the goal Seabrook fell down for against apparent-future-Hall-of-Famer Brendan Gaunce ought to be grounds for banishment to the center of the sun.

Compounding this problem is that in the four games prior to Calgary, he found himself behind the Schmaltz line. And we know what happens when those guys lose the puck. So in an effort to shield him, Quenneville also managed to set him up to look foolish, which he often did.

Anyway, the first Flames game was an odd mishmash regarding whom Seabrook saw at 5v5. While he spent the most overall time against the Mangiapane (2:55)–Bennett (7:04)–Brouwer (6:19) line, he also saw a not-negligible amount of time against Gaudreau (5:06)–Monahan (4:22)–Ferland (4:49). The Johnny Hockey line also saw the most time against Keith–Oesterle by a long shot, which makes me think that any time Glen Gulutzan’s trust-fund face could chase matchups, he was sending his best at Gustafsson–Seabrook. Ironically, Seabrook held his own against Johnny Hockey & Co. better than against the Bennett Brouwer line. But over all five games, Seabrook was on the ice for five 5v5 goals.

Perhaps most damning are the WOWY numbers for these three over the last five (or four in Kempný’s case). Away from the Smykowski line, Kempný and Murphy consistently logged CF%s of 52+ to 54+.

And that’s not even getting into Gustafsson’s WOWY with Seabrook since he’s been called up (46+ WITH Seabrook, 58+ WITHOUT), or the fact that Gustafsson and the Schmaltz line have a 100 CF% in their four minutes away from Seabrook over the last five. That’s probably more of a sample size mirage, but it makes you wonder.

In short, it’s hard to find a statistical reason to sit Kempný or Murphy over Seabrook. It would make at least some sense to rotate Seabrook and Rutta, given their similarities in style and handedness, and since Rutta looked good by the numbers against Calgary the first time (54+ CF%). Instead, we’ll watch Q and Ulf trot Seabrook out like he’s Blood Sugar Sex Magik, even though he’s decidedly not that anymore, in the name of genius, leadership, or whatever other White Castle fart excuse they can find to justify this journey toward mediocrity in 2018.

Line rankings & positionings from dailyfaceoff.com, with cross-referencing on NaturalStatTrick