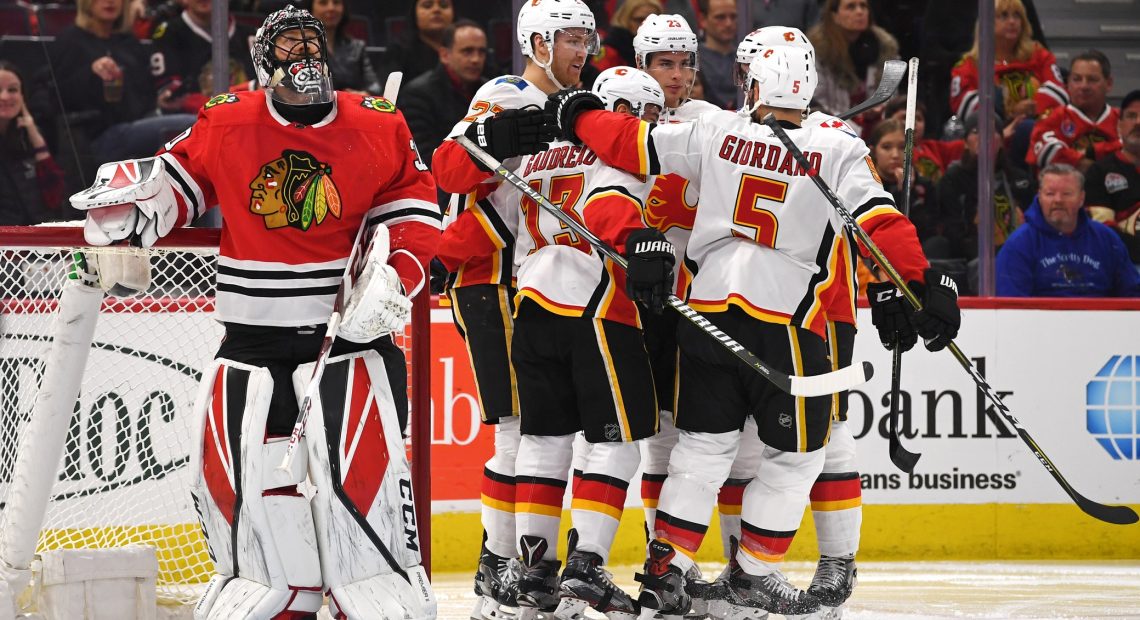 This was a painful one tonight. The Hawks actually played well, managing to lead in possession in all three periods and dominate in shots, and even Glass Jeff had a good night (and you know how I feel about that guy as a starter, so this should tell you something about his performance). I don’t like to scream at refs and blame bad calls because everyone gets bad calls, and it usually all comes out a wash. That wasn’t exactly the case tonight, but I’m still not going to scream. I might cry in a dark room, though. To the bullets:

–Let’s not bury the lede: the Hawks basically were unlucky/got screwed by a call on a truly bizarre play. What would have been their second goal, taking place about midway through the second period, was called back after not one but two reviews, the first from the “war room,” the second from a coach’s challenge by Calgary. Hartman and Jurco were scrambling in the crease, and while TJ Brodie was assaulting Hartman, Mike Smith lunged at him (Hartman), and in the ensuing scrum the puck managed to trickle in. It was impossible to see if it was kicked in with any kind of distinct motion, and aside from a deflection off Hartman’s glove, the puck couldn’t be seen in the mess of bodies and equipment.

This is why the call on the ice of a goal wasn’t overturned by Toronto, but Smith, knowing that Oscar season is coming up, turned in a performance that was enough to get the goal overturned the second time through. The concept of goalie interference has become a complete joke, from Bettman’s shruggy-emoji comments the other day to the nonsensical calls on the ice in various games that get stupider by the day. Nice work, NHL.

–As alcohol-consumption-inducing as that sequence turned out to be, it was precipitated by some actual quality plays at the blue line. Jurco kept the puck in the zone as he was leaving the penalty box and jumping in, and his shot started the entire process (albeit with a point-blank fuck up by Garbage Dick). Seconds later Kempny made a great keep that led to the net-front scramble. As someone used to seeing the Hawks at the blue line resemble a sieve where the holes are too large and draining spaghetti leads to maddening leakage that you’re helpless to stop, this was encouraging.

–In the end, though, it didn’t matter because what had the appearance of a goal on a high stick late in the third by Gaudreau was allowed to stand. It seemed clear if not dead certain that he tipped it with his stick above the crossbar, but it was obviously not conclusive enough for the refs so they let it stand after Q’s challenge. Kane finally dialed up his give-a-shit meter to get it to 3-2, but it was with barely five seconds left in the game (after he had missed on a couple good chances earlier), so it did nothing. Two calls went the Flames’ way tonight and the Hawks didn’t play well enough to overcome it. And now the hole they’ve dug themselves just got much, much deeper.

– The 3M line was good but didn’t dome the Toews line tonight. Through the second period they actually had a CF% at 40 and less. It wasn’t until the third period that they got above 50%. Tkachuk and Backlund combined for 5 shots so they got it together eventually, but at least they didn’t kick the shit out of everyone?

– The Fels Motherfuck almost made an appearance tonight. After we decided on this week’s podcast that Ryan Hartman basically sucks—for reasons that are not entirely his fault—he came out and played very well. Had he been credited with that crazy goal, it probably would have reached Motherfuck status. That aside, he personified the much-sought-after Annette Frontpresence on Top Cat’s power play goal in the first, and at the end of the first his Corsi was 100%. That’s right. 100%. He ended the night with an 86.4 CF%, and three shots. So all that pooh-pooing of the Saad-Hartman-Sharp line was, perhaps, premature, but they still didn’t score so maybe not. With the way this season has gone, I expect they’ll follow a solid performance tonight with an average of about a 15 CF% and trip over their own dicks to give up four goals while they’re on the ice on Thursday.

–In another test of do-you-see-this-as-half-full-or-half-empty, Seabrook was extra stupid in the second with a boarding penalty while the Hawks were already on the kill. The full-glass aspect of this was that Toews, Keith, and Rutta did a masterful job of killing the 5-on-3. Toews won a key faceoff near the end of it, Keith had a couple blocks, and Glass Jeff, bless his heart, he did what had to be done.

–Kempny and Rutta seemed like an odd pairing to me before the game, but they managed decent possession numbers (65.4 CF% and 64 CF% at evens), and overall the defense was not terrible. I’m still a little suspicious of CONNOR MURPHY’s illness being the reason he was scratched tonight, unless he was already retching yesterday and that’s why they had him paired with Tommy fucking Wingels for practice. Or more likely, being paired with a non-defenseman waste of space MADE him sick. These are the twisted conspiratorial thoughts I’m left with thanks to the team’s constant secrecy.

All the teams we’re chasing won tonight. The Wild, the Ducks, and as of this writing, the Avs were winning as well (not to mention the obvious with the Flames getting two points on us). We’ve said it nearly every game that THIS IS THE TIME and they must turn things around, but it’s starting to feel like that may not happen. Even when they played well, they just didn’t get the breaks going their way. Like Ozzie Guillen said, I’d rather be lucky than good.

Beer de jour: Vanilla Porter by Breckenridge (not usually my type of beer but this is the post-Super-Bowl dregs of my fridge).

Line of the Night: “The ref’s explanation was garbage.” —Adam Burish, describing the goalie interference call and everyone’s thoughts on the matter.