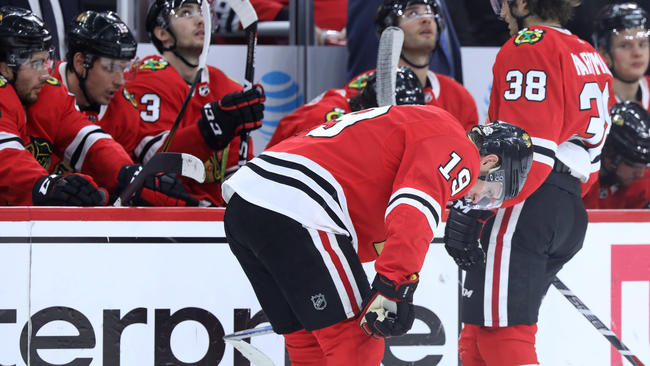 Last night’s frustrating loss whipped up a little more vitriol and angst than previous losses have. Perhaps it was the manner, as the Hawks did play well, couldn’t finish, and were on the donkey end of a couple calls (one not egregious, one that really defies belief). Still, the Hawks only scored one goal that mattered, really none at even-strength, and you’re going to get what you get when you do that. Which is not much and basically a handful of yourself.

And while it hurts to say, given the results everywhere else it’s left the playoff hopes in tatters, and now the Hawks are going to need something bordering on miraculous to even get back into the discussion. Which means the knives are coming out, and that means people want guillotine fodder.

It’s understandable. While I don’t think anyone expected this team to repeat last year’s regular season, this has been a disappointment. The injury to Crawford has been more crucial than anyone wants to admit, because no one wants to admit their team hinges so heavily on a goalie. But the Hawks are hardly alone in this. If Pekka Rinne weren’t having a renaissance season at 35 the Preds would be way off where they are, because they really haven’t been a good defensive team yet this year. The Jets and Hellebuyck. Vegas and their rotating cast of clowns. When the Kings were riding high it was because Quick was throwing a .940 at the league. Even Tampa, the best team in the league, has Vasilevskiy as a Vezina leader. Rask has lifted Boston. This is just how the league works now.

But that’s not enough for a lot, and I don’t know that they’re wrong. People want the house cleaned, and that’s both GM and coach.

Our feelings on the coach are well-known at this point, so let’s save that for a bit later. When it comes to any possible firing of Stan Bowman, one has to ask what the expectations for him and the team really were, not what they said they were, and what mistakes you’re firing him for.

If Stan is truly, and being allowed, to try and engineer a rebuild on the fly and the results this year aren’t quite as important as next season’s or the one after that, you’d have to say his results at worst are just on the positive side. Nick Schmaltz has proven to be a bonafide #2 center in this league. Alex DeBrincat looks to be a future top line sniper, with a dash of vision thrown in. The Connor Murphy trade was a good one, whatever his coach or blinded local media seem to think. Vinnie Hinostroza and David Kampf look like they can be bottom-six contributors on a good team.

Yes, Brandon Saad has disappointed. Maybe that could have been scouted out in Columbus, because he did do this at times there, too. But the thought was that being back in Chicago and on the top line would reinvigorate him. Stan was hardly the only one who thought that. Other than Kane, the other veterans have not performed up to their usual standards. But what was the alternative there? They’re going to be here until they retire.

Ah, this is where the discussion begins. Brent Seabrook’s contract. Ok, let’s have it. Let’s go back in time. Even if I were to grant you that Seabrook’s extension was all Stan’s decision, and I won’t, remember when this contract was signed. Three months after a third parade. It would have taken quite the tires for any GM to let Seabrook go into the last year of his deal, after he was a major, major cog in a third triumph (and you forget how good he was that spring) and then simply let him walk. Or better yet, trade him right after the confetti had fallen to the Soldier Field ground or during the season. I can’t think of a precedent for it. Yes, you might point to the purge after the first Cup, but there was no alternative there. And all of Ladd, Byfuglien, Sopel, Versteeg, even Niemi, were more contributors than cornerstones. Seabrook was a cornerstone. Yes, the Penguins let Trevor Daley walk after two Cups. Trevor Daley also sucks and always has. You’ll notice they probably overpaid for Justin Schultz. They’ve hinted at trading Kris Letang, which would be a comp, except he’s been fragile his whole career and wasn’t even part of last year’s run. Seabrook was neither of those two things at the time.

Yes, perhaps Stan could have played more hardball (again, if this was up to him). Maybe he could have gotten less years on it, but that probably only raises the AAV. And quite simply, hardball negotiations are not something the Hawks do. They’re terrified of it. That’s why they traded Saad the first time instead of waiting him out and imagining an incoming offer sheet that simply was never going to happen. It’s why they’ve twice handed Toews and Kane extensions well before their deals were up that were probably higher than they had to be. It’s why Crow got his deal, though man does that look like a bargain now. They just don’t do it. Their first priority, it seems, is to be seen as THE player-friendly organization.

Stan’s biggest mistakes were losing Teuvo, Johns, and Danault for essentially nothing (though the latter was in a go-for-it trade that simply didn’t work). Even if we accept they had to go, you can’t lose young players like that for nothing in return. And that’s the ground that Stan is trying to make up. I would argue that he had to lose those players to pay other ones to please coach and president, but I won’t be able to prove that until someone writes the tell-all book in about 10 years.

Another thing Stan is working against this campaign is that due to the NHL’s incomprehensibly stupid cap-recapture penalties, he wasn’t really allowed to do anything with Hossa’s money. The Hawks chose not to use the LTIR money in the summer so they could have flexibility during the season, and that’s understandable. What’s not is that they had to make that decision at all. Hossa’s contract was not against the rules when signed, so why should any team be punished for that after the fact? The blame could go to the players’ union as well here, who simply lied down and accepted this ridiculous rule without any fight.

If Hossa could have simply retired and freed up the money, which he should have been able to do, it’s not like the last free agent class was staggering but there were players who could have helped, whatever the aims of this season. Bonino? Shattenkirk (was only going to the Rangers but you get it)? Radulov? Hainsey? Kulikov? Varying degrees here, but clearly some if not all would have helped. The Hawks couldn’t do any of it because of cap-recapture. That seems like a pretty big obstacle.

I’m not saying this roster turnover is going to work next year or the one after, and then it won’t matter anyway, I don’t think. But if indeed that’s what’s going on here, Stan should get to see it to its completion. And if that falls short, then I give you permission to fire him.

How Summer Of Saad And Sharp Altered Hawks View 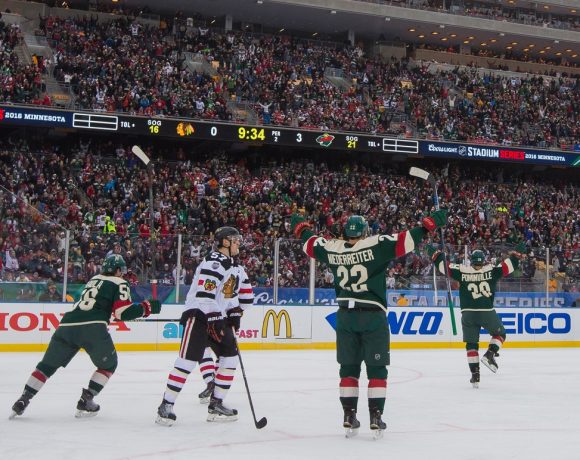