And You May Ask Yourself, Well, How Did I Get Here – Hawks 3, Islanders 1 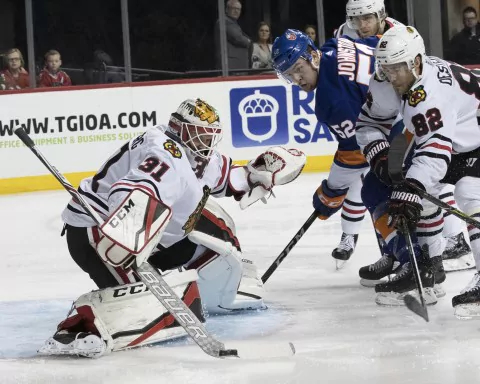 It’s a pretty sad commentary on the season when holding on to beat a bottom-feeder after being eliminated from playoff contention is the best we can muster, but hey, here we are. To the bullets:

–With Toews out and nothing really of consequence to play for (pride? Does that matter?), the lines were more jumbled than usual. However, the top line of DeBrincat-Kane-Saad was enjoyable to watch, in the same sense that Taco Bell after a night of drinking is enjoyable: in the moment it solves a specific need and makes you feel better, but it doesn’t fix the underlying problem—no matter what you tell yourself about that food “soaking up the alcohol,” that hangover is still coming. And so it is with this scenario. These guys aren’t really a viable line and Kane, notwithstanding his foiling a Tavares shot in the third with arguably his best defensive play of the season, is not a center. But what does that matter? At evens this line ended with a CF% right around 70, and they totaled nine shots between them all.

Plus they scored the goals that mattered (Seabrook had an empty netter, bfd). Kane’s goal was on the power play, so I’m not chalking that up to his fantastic chemistry with these linemates. But Saad overcame his generally terrible luck and banked a shot off Halak’s ass, as he looked around frantically for the puck in all the wrong places. Not only was it enjoyable to see shitty goaltending screw over someone else, it was also nice to see Saad score the goal that would end up being the difference maker.

–And that’s because John Tavares came close to single-handedly getting the Islanders back in the game. He had a pretty wretched 31 CF% and no shots until the 3rd, but he scored the only goal after continual pressure and just plain old creating the chance to go top shelf on Forsberg. He probably would have had two goals if Kane hadn’t lifted his stick just enough on the opportunity he had in the slot, which was shortly before the goal he did score. I know it’s unlikely that the Hawks could pull it off, but I’d be lying if I said I didn’t want them to make an attempt to bring him here after he hits the market this summer.

–Anton Forsberg looked nervous and at times shaky in net, but he played the part of serviceable backup pretty well tonight. He finished with a .969 SV% (NICE), and while it’s rather pathetic that this display of goaltending prowess could only be managed against the lowly Islanders, at this point we should just be happy that the guy who started in goal was able to finish the game. And it’s not like Halak was any better, so there’s that.

–Vinnie Hinostroza was his usual energetic self but he seems a bit snakebitten. After missing the net on a good chance in the second, he was visibly frustrated and took it out on his stick against the post. I can’t fault the guy—he’s consistently one of the fastest if not THE fastest Hawk out there, and he and Schmaltz seem to have good chemistry. Yet he hasn’t scored a goal since March 3rd, and hasn’t had a point all week. I hope he can rack up a couple more points before the season ends, and finish it on a high note. For all his effort, he deserves at least that.

–Jan Rutta did a good thing! He had a nice play in the first to stop Barzal on a breakaway, exactly the sort of thing a defenseman is supposed to do. It should speak volumes about our defense that one good play by this guy would stand out so much, but again, here we are. The defense actually wasn’t awful tonight, but again, it’s the fucking Islanders so I’m not sure how much this really means. But we’ll take our victories where we can get them (literally).

There are so few games left…we can almost count them on one had. It’s sad, it’s a relief, it’s frustrating, it’s a lot of things. At least this one was a win.

Beer de jour: 312 by Goose Island (there’s a bunch of it in my fridge and, well, I was too lazy to bother getting anything else)

Line of the Night: OK, so I don’t have one and that’s because I was listening to music with the game on mute, which apparently my esteemed colleagues just figured out is a thing you can do (sorry guys but I’ve been laughing my ass off about this all week). For those of you who haven’t tried it yet, I highly recommend it and not just for hockey—it works with any sport. But don’t fret—Line of the Night isn’t going anywhere…now you know why I don’t always have one. And what was I listening to? Well, it’s a vinyl evening here at Casa di Rankin, going through my catalog of Bob Marley records, including Live from the Record Plant, Kaya, and Uprising, among others.