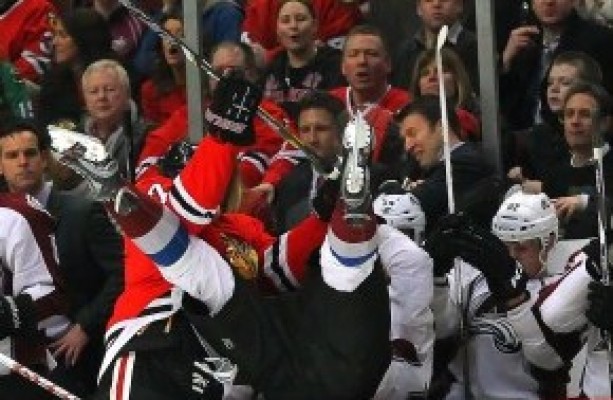 In tonight’s Indian, as I listed the things that were not totally up to snuff through the first half of the season, I wondered if it was going to matter if it all. Maybe the Hawks had just fallen down the rabbit hole, and logic and reason and anything that made sense was simply not going to make a difference any more.

Well, here’s tonight for you. Phil Collins would probably tell you there’s something in the air.

Is it a hockey magic moment? Obviously no one will know until the baubles are handed out. But should they go to the hands we want them to, you’d certainly look back on this one and label it that.

Ok, let’s get what you’re all dying to know out of the way. No, I’m not going to “eat crow” about Gorilla Salad. Though I’m guessing crow goes quite well with such a dish. One well-timed goal does not suddenly make Carcillo an important, or even useful, player.

What I will say is that with the Hawks down to eight forwards, and Gorilla Salad having to take a regular shift, he did all the things he’s fooled Q into thinking he does all the time. He worked hard on the forecheck, he kept cycles going, he got to the net. That’s what he did for the goal. If he did that consistently on the 4th line and threw in a clean hit every so often, I wouldn’t complain. But he doesn’t.

The real making of that goal in Marcus Kruger outworking two Avs below the goal line and then finding Stalberg’s tape.

I will also add that on a night where you lose two of your top six, your 3rd line center, and your 4th line dynamo is also absent, and you get a game-wining goal from that mess….well, I don’t think I’ll say it. But you know what I’m saying.

-Let’s get the other major issue out of the way. I’m going to speculate that because Hossa took the warmup but didn’t make the bell, he’s dealing with something more nagging than serious, and will probably be back in no more than a game or two.

Patrick Sharp on the other hand, that looked back. When a player is bent over like that it’s either shoulder or wrist (shoulder also meaning clavicle). I’m going to prepare myself for six weeks on the shelf. Because it could be worse.

While this will send everyone on a “Get Iggy!” train of panic, there’s no need. What should happen is Ben Smith is brought up to skate on the 4th line with Frolik sliding up. Or Stalberg sliding up.  You could put Hayes up there and tell him to get to the net for Kane to find him. Or, if you wanted to get real creative, because Jeremy Morin has the most similar game and plays the left side, you could plug him in there. He won’t be Patrick Sharp, but he can get you out of some games.

What will happen? Carcillo will skate on that line and Bollig, Mayers, and probably Montador will rotate skating as the 12th forward.

None of the options are Patrick Sharp, no matter how he hasn’t been all that Sharp-like this year. But the Hawks can survive.

-Michal Rozsival did not have a good night, as he clearly struggled with the speed of the Avs. But the positive thing is that the only teams who are as fast as the Avs up and down the lineup are the Oilers, Hawks, and maybe Canucks. Only one of those teams is one you have to worry about seeing when the games truly matter.

-Both teams coverage in their slot was exemplary. The Hawks have been that way all year. The Avs most definitely have not. But there was little room in front.

-On Toews’s shorty, I know Jamie McGinn had lost his stick and is a forward. But when he sees Tazer up against another forward in Ryan O’Reilly, maybe you just tackle him instead of blocking out Bolland in front and deal with the loss of a power play instead of a game-changing goal. This is also not the first time the Avs have struggled with forwards on the point on a power play, because they don’t have a real QB.

-I’m not sure the goal would have been that important if Ray Emery hadn’t been….well, Ray Emery on the two Avs goals. He did make some big saves to be sure, and the first Avs goal was a neat passing play between ROR, Mitchell, and Kobasew. But you saw how much Emery struggled to get from near post to far and back to near, giving Mitchell plenty to aim for.

On the second, Seabrook had played that rush well. He’s blocked the shot off the drop pass, and forced Duchene wide. But Emery didn’t get over to his post quickly, and Duchene got it there quickly and cleverly.

I’m not saying this is the Emery bubble bursting. But he was shaky against Columbus, and these two tonight. Just keep your eyes peeled, is all I’m saying.

-Viktor Stalberg attempted nine shots, getting five on net, including the one that set up the winner. One of the Hawks best wingers for the past few games. The other is Bickell.

-Oduya’s confidence on the puck in his own zone under pressure is bordering on Billy Idol cocky.

-I want a Gabriel Landeskog. Sadly, I’ll never get one.

-Another game where Nick Leddy was really pushing. He had the one rush that you’ll recall, but there were others. He should really do that more on the PP. He’s understandably been deferring to The Good Time Boys. But being a real QB is calling your own number sometimes, and he can be a one man entry.

The Murky State Of Urgency