Your Friends In Neighbors – ’17-’18 NHL Team Previews: They Lost A Leg In Dallas They Were Dancin’ With A Train 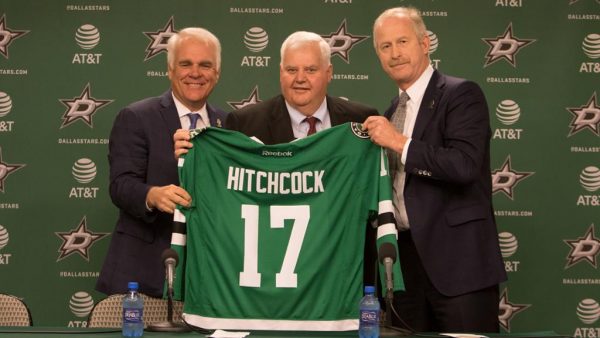 Ah yes. Everyone’s darling, the Dallas Stars. Another offseason championship for the Dallas Stars, as they upgraded behind the bench from Lindy Ruff to Ken Hitchcock, going from one coach who hasn’t won anything in over a decade to… another coach who hasn’t won anything in over a decade. They signed a winger who until last year was considered “enigmatic” and then went bonkers in his free agent year, because that always sustains after he cashes in. They upgraded their goalies, which tells you something as signing an over-30 goalie who has had hip and groin issues being considered a massive upgrade lets you know just how woeful their goaltending was. And there are a raft of kids who haven’t quite proven to be ready to take up the slack, with a coach who hasn’t always shown patience. Surely it’s going to work this time!

Before we get to the team here, a word on Ken Hitchcock. Since the Great Lockout in the mid-aughts, Ken Hitchcock has taken a team to a conference final exactly once. Just for funsies, here’s a list of coaches who have taken a team that far or more twice or more: Mike Sullivan, Peter Laviolette, Peter DeBoer, Guy Boucher, Randy Carlyle, Jon Cooper, Joel Quenneville, Alain Vigneault, Darryl Sutter, Dan Bylsma, Michel Therrien, Claude Julien, Todd McClellan, Mike Babcock, Dave Tippett, Lindy Ruff.

Now, there are some really good coaches on that list. And there are some blithering morons on that list. Hitch might not be a blithering moron (I said, “might”) but clearly his reputation is overblown by a factor of six. I suppose two division titles in a five-years-and-change in St. Louis is a good record, but does anyone there or outside of there give a shit? I’ll hang up and listen for my answer.

Anyway, let us away, friends…

Goalies: So the move that has everyone apparently having their eyes bug out of their head is the acquisition of Ben Bishop (THE BISHOP!). Had this happened before last season, there would have been more reason to take notice. Everyone seems to conveniently forget that THE BISHOP! wasn’t very good last year. He played himself out of Tampa Bay, with a .911 SV% there. To be fair to him, his .922 at evens is not awful, and he mostly got torched on the PK. So it’s wonderful that he’s heading to the team that had the worst PK last year. That just lines up so beautifully.

In the interest of fairness, Bishop is only a season removed from finishing second in the Vezina voting, and being a finalist twice in three years. He was mediocre in the year between, so he has bounced back before. Bishop will turn 32 this year, which is hardly ancient. But he had problems with both his hips and groin in the past, which are the exact two places on a goalie that’s 6-6 that usually spell “impending death.” Bishop will be an upgrade on the Lehtonen-Niemi axis of vomit merely by standing in net and not moving. But how much? Anyone who tells you they know for sure is selling you something.

Lehtonen will be backing him up, and he’s capable of the occasional spasm of brilliance. The Stars will have to hope they all come in his spotted starts, or if he has to fill in for Bishop in case of injury. But Let-One-In has been basically woeful for three years running now, and in the Central you can’t give too many games away because your backup lacks oxygen. Don’t fool yourself, goaltending could bring the Stars down again.

Defense: The wheels came off John Klingberg last year, who clearly missed having Alex Goligoski and Jason Demers around. Klingberg spent most of his time babysitting the usually overmatched Esa Lindell, who wants to do the same things. Hitchock likely won’t make that same mistake and will give Klingberg a free safety in Marc Methot. Is Methot any good away from Erik Karlsson? It really doesn’t matter as Klingberg can be homeless Karlsson. There is no prettier passer from the back in the league than Klingberg. But Methot won’t be protected by Boucher’s oh-so genius trap either, though Hitch’s system tends to be just as hard to break down.

But the depth after this is highly questionable. Because Lindy Ruff is a moron, he didn’t realize what he had in Stephen Johns, whose peripherals were actually pretty stellar. That didn’t save him from being a healthy scratch. Expect Johns’s game to take the biggest leap under Hitch. Dan Hamhuis was actually better than you think last year, but he turns 35 during the season and there’s rumblings the Stars are going to move him anyway to make room for all of Oleksiak, Lindell, Johns, and Julius Honka (Honka! Honka!). If they do that this becomes an awfully young blue line, and it feels like the Stars have been waiting on Oleksiak forever. It has a ton of potential both ways.

Forwards: You know, this doesn’t have the depth you think it does at first. Yes, Seguin and Benn at the top is scary, and they’ll be joined by Alex Radulov. Of course, I’ll believe Radulov outside of a contract drive when I fucking see it. Benn dropped to 26 goals last year, and it wasn’t just a dip in his SH% either. He dropped in shots on goal and attempts, and he’s going to have to get those back to be the 35+ goal guy the Stars need.

Beyond that? Jason Spezza is still here, but they’ll be counting on Matthias Janmark who missed all of last year and only has one year experience under his belt. Brett Ritchie, Radek Faksa, Antoine Roussel, Devin Shore, these all could be nice pieces but none have cracked 20 goals in an NHL season. And all are going to have to learn under an iron fist of a dinosaur. That team two years ago that won the division had a healthy Sharp, Hemsky, Eakin. This one has none of that. Again, there’s potential here but it’s not a sure thing.

Outlook: Keep in mind, this is a team that finished eight points behind the fucking Jets last year. So predicting them for the top of the conference is near ludicrous. Yes, the PK can’t possibly be as bad. Yes, Hitch should shore up the defense a ton. Yes, there’s potential for a lot of scoring. There’s also potential for an ouchy and bad THE BISHOP!, a blue line not up to it beyond Klingberg, and a top-heavy forward corps, especially if Radulov ODs on BBQ. They could go anywhere. Can they scrap for a wildcard? Absolutely, but keep in mind that’s going to require nearly a 20-point improvement. Let’s pump the brakes a bit on the Green.