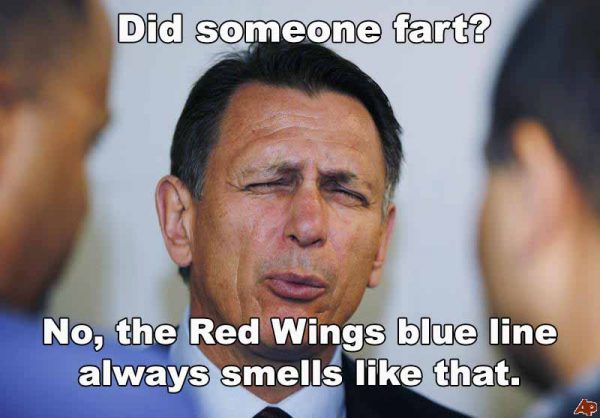 God, it’s even worse (way better) than I thought. Look at that. They didn’t do anything well. This team’s leading scorer was Henrik Zetterberg, who’s 40-12 years old and has more miles on him than a west Texas pickup. And he outscored everyone else on the team by 20 points. No wonder he can’t wait to fuck off after his salary drops. Why should he have to put up with this shit any longer than he has to? Of course, Z would never accept a trade to be a very good 2C somewhere else to get another ring because they put something in the fucking water in whatever suburb they house all their players (don’t think for a second any one of them goes anywhere near the city except for 41 times a year) that makes them think there’s nowhere better than southeast Michigan. It’s a fucking miracle Marian Hossa escaped, it really is. Anyway…

Goalies: Oh look, it’s still this Howard-Mrazek axis of death it’s been the past two years. Howard was actually pretty good last year for the 27 games he played, with an evens SV% and overall SV% of .927. The problem was those 27 games, and Mrazek was fucking awful the rest of the time. It was only Mrazek’s second full NHL season, and maybe he’s that .921 goalie he was two years ago. The truth is probably somewhere in between that and last year’s full body dry heave. But what the fuck does it matter when it’s behind this blue line? The Wings aren’t going to get nearly the goaltending they need to make up for the deficiencies in the rest of the team, which would be somewhere between Doctor Strange and a rip in the time/space continuum.

Defense: Good lord don’t look directly at it. Their big signing, for reasons only Ken Holland’s brain trauma could explain, was to sign Trevor Daley. Because what this team really needed was another d-man who runs around his own zone like a PCP-addict and then shotguns up the ice before the puck is out. This is going to be so fun, because despite whatever Hawks fans yell between Miller Lites at Mark Lazerus on Twitter, Trevor Daley sucks. Danny DeKeyser is still here. Jonathan Ericsson is still here. Mike Green is still here, and he might be the best they have (which makes the Daley signing even more hilarious… god I need to lie down). The collection of bones and tissue that Niklas Kronwall is now is still here, but no promises he makes it through the season before they have to scoop him up with a fucking roomba. Xavier Ouellet once upon a time was going to take over for Lidstrom. Now he’s wondering what the hell he got into. Ryan Sproul is fun to say. This continues to be the black hole it’s been for like five years, and Holland is helpless to do anything about it. This team has two puck-movers who can’t play D, and about seven guys who can’t do either. And there is little hope on the way. It could be like this for a while. I’ll wait here while you go giggle out in the alley to not annoy your coworkers.

Forwards: God this might even be worse, especially if they can’t come up with the cap room to pay Andreas Anathasiou. And they can’t pay him because they’re forking over a combined $9.4 million to Justin “Let Out The” Abdelkader Because The Revolution Is Here, and Frans Nielsen. And look, Nielsen is fine if you’re really good and need a 3C. He’s also 33 and wasting away here. Do they know if Larkin is a center yet? Tatar and Nyquist will do just enough to make you not care on way or the other, and Sheehan, Mantha, Glendening will do not enough and you’ll wonder why any press was spilled about them when they were in the minors in the first place. Hey, Darren Helm is here to play 15 games! Rejoice! Seriously, without Anathasiou this team has like two wingers that anyone should give a shit about. With only another year remaining on his contract the Wings really should look into cashing in on Nyquist to get anything resembling a d-man. But they won’t, because Ken Holland is still convinced he can rebuild “on the fly.” Good god has an emperor ever had less clothes than this?

Outlook: They’re going to be hilariously bad. Even as big of a mess as the Bruins are they’re clearly better than this collection of Seger t-shirts. That puts the Bs, Leafs, Canadiens, Tampa and Senators simply because of Karlsson as clearly better.  That basically rules out the playoffs for them. The Panthers are almost certainly better too, and the Sabres might be simply because of Eichel and their superior goaltending. The Wings very well might bottom out here, which would result in the kind of pick they need to start turning this thing around. Except Holland will almost certainly deal it to… oh I don’t know let’s say Arizona for Hjlamarsson even though he might be clinically dead by the draft. Or to the Kings for an aging Doughty. It’s going to be awesome. I almost want to fast forward to there.