Sit Back, Relax, And Strap It Down – ’17-’18 Blackhawks Player Previews – Connor Murphy 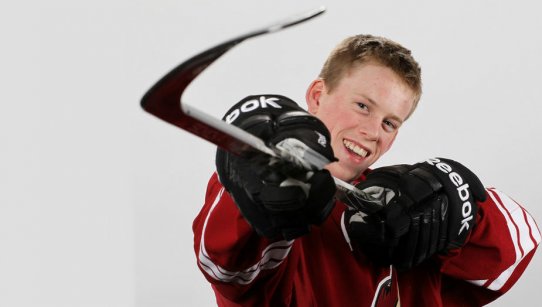 Connor Murphy is not and will never be a generational talent, so saying, “How he plays will be the difference between expected Hawks hockey and hog piss,” is frightening. But here we are, hoping that a 24-year-old Scut Farkus lookalike with no real accomplishments—aside from surviving any of the one-man shows Mike Smith undoubtedly forced his teammates to sit through—can fill the oversized hole left by Niklas Hjalmarsson.

A Look Back: Whether fair or not, Murphy’s performance will be judged by how much like Niklas Hjalmarsson he is. Upon first glance, Murphy’s overall body of work is fairly similar to Hjalmarsson’s. He spent most of his time last year in his own zone, trying to flip the ice so that Tie Domi’s son could parlay his father’s complete lack of skill into never-ending praise. In fact, Murphy spent 2.4% more time in his own zone than did Hjalmarsson, and his CF% was only 3.5% worse on an embarrassingly bad Coyotes team. He’s a bit bigger than Hjalmarsson at 6’4”, 212; reportedly skates well despite his size; and has a right-handed shot.

Playing in Arizona—the monument to hockey’s arrogance—did no favors for Murphy’s offensive numbers. Fortunately, that’s not why the Hawks brought him here. You’ll take the 17 points (which was one less than Hjalmarsson provided last year), but Murphy isn’t going to tear any holes in the sky in the offensive end.

According to those in the know, Murphy has some problems with taking stupid penalties at inopportune times, which might be misleading, since that implies that there was ever an opportune time for the Coyotes since Murphy’s arrival. He can get a bit panicky under pressure, but he isn’t afraid to TRO A BIG HIT OUT DARE MY FRENTS, with a worthless 201 hits in the desert last year.

It’s hard to judge whether this will put Murphy on Q’s short leash should he pull a boner in a game-changing situation; after all, TVR played 158 professional hockey games with these Chicago Blackhawks on purpose. But if the rumors about Murphy are true and Q turns into a curmudgeon, it’ll add some additional sag to an already deflated back end.

A Look Ahead: The big question with Murphy is, “Who’s his partner?” The scuttlebutt is that he’s going to be a Top 4 guy, mostly because the Hawks currently have exactly 1 of the 4 components necessary for 2 top pairs in Duncan Keith.

If you pair him with Keith, that leaves Seabrook with either Forsling; Kempný; or one of the Young and the Useless in Rutta, Dahlstrom, Gustafsson, Rozsival, or something called Jordan Oesterle, which sounds like the kind of thing you’d eat when you absolutely needed to have diarrhea.

With Seabrook a Tommy Bahama away from becoming a full-fledged Jimmy Buffett impersonator, you’d expect a Keith–Seabrook pairing, unless you ask either Murphy or Seabrook to play his off side. You’d assume that Quenneville lets Kempný out of the gimp suit to skate with Murphy, but Q’s massive throbbing genius brain has made fools of us all too often.

Behind Keith and—if you look at him with enough glare from the sun—Seabrook, Murphy is probably the Hawks’s third best D-man. He’s fine if not underwhelming for the price ($3.85 million cap hit), but on the edge of 24, he will need to prove that his numbers really are the result of playing in America’s chafe rather than wasted potential. Given that the Hawks have won three Cups on the backs of their defensemen and Crow—who consistently receives Dangerfieldian levels of disrespect—Murphy will need to develop into a shutdown D-man fast.

Best case scenario, Murphy pairs with Keith while he feasts on bums, while Kempný defies all known laws of physics and matter and is able to cover Brent Buffett’s ample ass well enough to keep opposing top lines at bay, leaving Forsling and the unassuming law firm of Rozsival Rutta Dahlstrom Gustafsson & Oesterle to clean up the dreck, if they aren’t too busy guest starring in Glen Lerner commercials.

Most likely scenario, Murphy and Kempný pair and flounder early, only to pick things up after Keith has averaged his age in ice time. The NHL is forced to formally ban garbage bags of chimichangas on the ice as Seabrook stress eats himself into Byfuglienian proportions to cope with his waning talent.

All stats retrieved from hockey-reference.com.