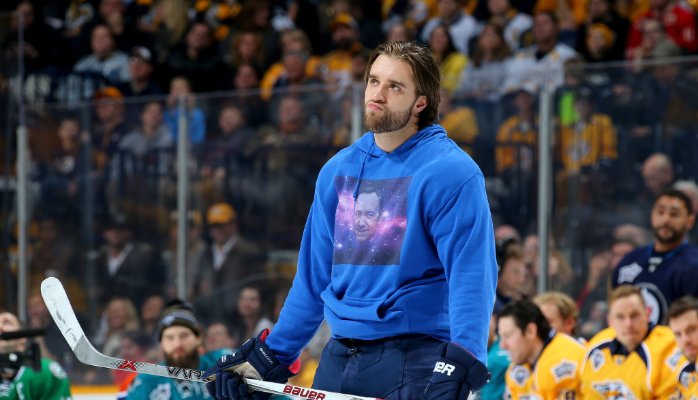 A lot of the ink spilled on the Florida Panthers this summer was in the vein of, “What are they doing?” Three of their top six scorers were simply let go. Reilly Smith was traded to Vegas (don’t every say, “Las”). Jesse Marchessault was taken in the expansion draft. Jaromir Jagr was just allowed to walk. They had yet another front office shuffle, which landed Dale Tallon back into the GM’s chair. They hired Bob Boughner as coach.

Here’s the thing. The Panthers are weird. And they’re weird because they’re owned by a rich guy who is obsessed with the army. And any rich dude obsessed with the army is fucking trouble. He patterned the logo after the army. The uniforms. He wanted the Panthers to be in the game at West Point. I want to pretend he’s like Buster Bluth and calls it, “Army,” but no, this dude served and thinks it should be the foundation of every company he runs, if not the world at large. This is just bad. And as long as he’s there, the Panthers will be weird.

Goalies: This could actually be a pretty interesting story. Due to injury and performance, Roberto Luongo (there was something in the air that night, the stars were bright…) and James Reimer basically ended up splitting starts. And Reimer was better. Who knew that once you got him out of Toronto where their deranged fans and media were intent on turning him into a puddle of piss he’d actually look good? He had a .929 mark at evens, and at age 29 is right in the heart of his prime. There’s little reason to think he can’t put up those numbers again, because he has in the past with any kind of competent team in front of him.

Bob is going to turn 39 in April, and no matter his dedication and different aging curve for a goalie that’s old. Luongo isn’t the type to throw a bitch if Reimer takes over at this point. So while they’ll almost certainly split starts to start, you can seen Optimus Reim taking over full-time somewhere along the course. Either way, the Cats should get pretty decent goaltending.

Defense: Both at the blue line and up front, the Panthers have a pretty decent top end but lack a little something, and then the bottom falls out. Aaron Ekblad is a genuine top-pairing guy, though took a dip without veterans Brian Campbell or Willie Mitchell around last year. Keith Yandle and Jason Demers is an awfully solid second pairing if they played that way. And then… Alex Petrovic? I mean he’s not bad but that’s about it here. Maybe Ian McCoshen can make the leap into a full-time NHL-er, which would help. That doesn’t really solve who can play with Ekblad but it’s a start. It’s not terrible, it’s just not great. They look one d-man short of something really special here. Maybe they find it, maybe McCoshen or Michael Matheson are it, but they don’t have an answer here yet.

Forwards: Again, the top end of this is more than acceptable. Huberdeau-Barkov-Dadonov is a pretty good top unit (and will be just fine without Jagr, whatever your weepy hockey writers have to say). Down the middle they’re also fairly well set, with Trocheck as the 2C and darling of this blog Nick Bjugstad 3C, or able to moonlight as a winger on the second line. But after that? Radim Vrbata is here, and looking at Vrbata is akin to Sideshow Bob looking over the dam. “Seeing all those goals and points makes me wonder why the hell I should care.” Basically when you sign Vrbaa you’re pretty much admitting to yourself your season is going into the void, because he never scores a goal that matters in any way to anyone. There might be a couple kids who come to save the day in Henrik Haapala (and yes, we’ll be screaming this every time he scores), who tore up the Finnish League last year at 22. Canucks reject Jared McCann isn’t out of hope yet and could be a bottom six contributor. But the Cats will need them, or they’ll need a move.

Outlook: The Cats are still in deep here. With a rebound from the Lightning the automatic playoff spots look beyond them, as Carey Price is good for one himself and they aren’t nearly on the trajectory that the Leafs are. If Reimer and Luongo, or just Reimer himself, can provide last year’s production or more, and they find another d-man within or without to fill out the top four, and if they can find a scoring threat beyond the first line, you could see them hanging around the wild card picture for most of the season. But they look just a touch short of qualifying for the post season, causing their owner to change their colors to green changing their name to “Cadets.”