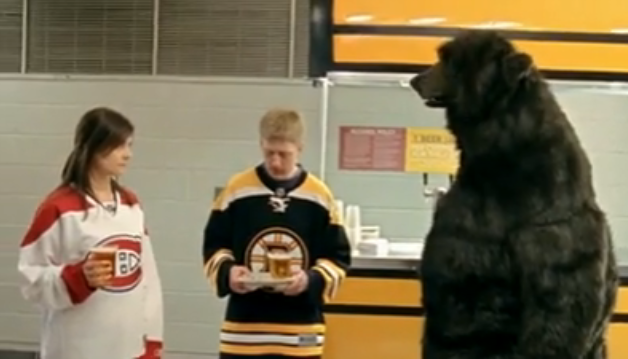 With Labor Day behind us and something of a crispness in the air, and the incompetence of the Bears about to be on display, it’s time to look forward to what will go on inside the heavily sponsored walls of various arenas around the continent. We’ll go team by team over the next month, so let’s kick this pig…

It only seems like 16 years ago or so that the Boston Bruins were an Eastern power, racking up a Cup and another Final appearance. But it all decomposed so quickly, much like Zdeno Chara’s mobility. Hey, think those things might be linked? Toss is some hilariously bad roster and cap managing, with a focus on just about all of the wrong things, and you get a tired, old roster with not enough kids that are going to be able to make up for it. This Bruins teams looks like it’ll happen in a vacuum, as they’ll play the 82 games their allotted and you won’t remember any of them.

Goalies: Tuke Nuke ‘Em remains the starter, and if you can believe it he turns only 31 in March. However, braking the barrier on his 30s has come with more worries for Rask than it has others, as he’s put up two middling seasons in a row, making one wonder if this isn’t the new normal for him. Rask’s even-strength SV% has dropped three straight seasons, from an unconscious .943 to .930 to .925 to a thoroughly underwhelming .919 last year. And this is while seeing a hardly burdensome 20.3 even-strength shots per game and 24.7 overall. Yikes. With Chara slowing down even more but still here, and the rest of the blue line being filled out by a lot of kids, you can expect Rask’s workload per game to go up. Sadly for the Bruins, there’s no guarantee that Rask’s performance will go with it. And Rask has never been the steadiest hand when things go haywire.

Backing him up is Anton Khudobin, who was simply abhorrent last year. It might open a door for Malcolm Subban to claim the role, though he’ll have to stay healthy for once to do that. And the idea of the younger Subban taking a regular role in Boston will have everyone watching from the edge of their seat while simultaneously through their fingers.

Defense: There’s a fan theory, one produced from the minds of the Fels Brothers, that we like to reference from time to time. It’s the Esteban Yan Rule. Basically it went that if Esteban Yan was in your bullpen, your team sucks. Well, if Jakub Kindl is on your blue line…

Chara will still most likely take top pairing minutes, at least to start while the Bruins pray that anyone can take it from him. He simply can’t get there anymore, and his size is mitigated if you can beat him to every spot. The B’s are going to bank on the hope that the very pie-faced Charlie McAvoy glimpsed in a handful of playoff games last year. Torey Krug will continue his homeless-man’s homeless man’s Paul Coffey act where he has no idea what’s going on in half the surface. Kevan Miller, not to be confused with Kevin Millar which assuredly happens in that town, and Adam McQuaid are here because someone has to be. Brandon Carlo had a promising first season picking up after Chara, and he might want to get the oxygen tanks ready because he’s probably going to have to do even more of it this season.

Forwards: Well, the outlook is what it will be with David Pastrnak and without Pasternak. Once again the Bruins are mishandling one of their young stars, and Kessel, Seguin, and Hamilton must be looking on and chuckling. Pastrnak put up 70 points at 21 and did it with both Bergeron and Krejci. These things don’t grow on trees but assuredly there are people in the Bruins front office that are grunting and snorting something about grit while scratching their sagging nuts and could cost themselves yet another talent they desperately need. Meanwhile they’ll hand over that check to David Backes and then pat themselves on the back… or sagging nuts. You see the problems here.

Bergeron himself just turned 32 and one wonders just how much longer he can continue to move heaven and Earth on the ice (that sounds weird). If there’s a reckoning coming it’s probably not this season, and he and The Last Hapsburg Marchand will continue to drive pretty much the whole team. David Krejci has been a quietly solid player for a while now, but dipped below a 60-point pace for the first time last year for the first time since 2010. Some of that might be having to drag David Backes’s dead ass around. But even if Pasta is brought back into the fold, things drop off in the bottom six in a damn hurry. Matt Beleskey…Riley Nash…Noel Acciari…I don’t want to go on anymore because I just ate. Ryan Spooner is going to be asked to do way more than a 3C should have to.

Outlook: Any team with Bergeron running at full speed is going to find it awfully hard to be outright bad. He makes things easier on everyone else, and Krejci and Spooner benefit from the easier ice. But there isn’t enough “there” here.  Even with Pastrnak, they’re not going to score enough. McAvoy and Krug aren’t likely to be enough to drive play, and even if they are it’s only worth driving it for a line and a half. The switch from Claude Julien to Bruce Cassidy in the middle of last year was ostensibly to see the team play a little more up-tempo and offensively, but it’s likely that Julien was just doing what he could to squeeze everything out of this roster. The Bruins still looked good on the advanced stats pages last year, but didn’t have enough finish or goaltending to make it count. What’s changed?

Also working against the Bruins is that they’re not going to get a punted season from the Lightning again. That said, this division isn’t exactly glittering. The Canadiens seem intent on shooting off all their toes. The Senators aren’t really all that improved from the team that had to miracle their ass to the top of the obstacle last year. But both still look a little better than this, and Toronto is going to be a whole lot better. Florida… well who fucking knows. The Sabres at some point have to pop, and the Wings are basically a GWAR opener. The auto playoff spots might be beyond them, but if Rask can channel the Rask from his 20s instead of this one, they could just barely snag a wild card spot. Why though, would be the question.