Sit Back, Relax, And Strap It Down – ’17-’18 Blackhawks Player Previews: Anton Forsberg 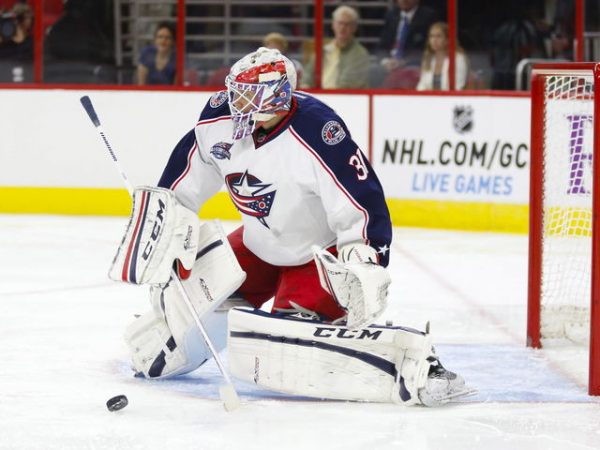 I know I’m still asking myself how I got here, but this isn’t about me; it’s about our presumptive backup goalie, Anton Forsberg. He may be asking himself that same question, but since he’s been bouncing around the greater Midwest in various AHL uniforms it kind of makes sense that eventually he’d end up here. By all indications he’s Crow’s backup, although it seems the Hawks have signed a guy who hasn’t actually proven he can play reliably at the NHL level.

A Look Back: Last season he played in all of one game and it wasn’t pretty (4 goals on 27 shots for a stellar .852 save percentage). In fact, the stats listed above are for his NHL career—all 10 games of it—because I thought giving you last year’s single game’s worth of numbers was neither helpful nor particularly illuminating. But even these numbers taken together don’t inspire much confidence. So what’s going on here?

Well, if you look at Forsberg’s time in the AHL it begins to make more sense. Last year with the Cleveland Monsters he had a .926 save percentage and 2.28 goals against in 51 games. The season before that he won the Calder Cup with the Lake Erie Monsters (wtf is with monsters over there? How is no one coming up with other names?), where he dominated in the playoffs with .949 save percentage and 1.34 goals against. His regular-season numbers that year weren’t too shabby either (.914/2.40 in 41 games).

His two seasons in the AHL prior to that were similar, with his save percentage comfortably above .900, oh and he kicked ass in Sweden for a few years and won gold at Juniors in 2012. OK, so all of this sounds fabulous. But I cannot shake the feeling that Forsberg is like a quadruple-A player in baseball: the guy who tears up the minors but can’t cut it in the show.

Part of this feeling comes from his paltry playing time in the NHL. He just hasn’t had the time to prove jerks like me wrong. But, with the exception of 2015-2016, every season he’s had with the Blue Jackets his goals against basically doubles when he plays NHL games. Can some of that be chalked up to shitty defense on Jackets teams in years past? Sure. But it also reeks of not being able to keep up with the faster and harder shots coming at the NHL level. It’s happened enough times now to suggest a trend (2014-15 with only 5 NHL starts, sorta decent in 2015-16 in just 4 games, one of which he came in in relief, then last year’s shit show). And with so few minutes last year, one would expect that his preparedness for this level of play has gotten even rustier.

A Look Ahead: I hope I’m wrong. I actively hope I’m wrong about everything I just wrote. And I very well could be—he’s only 24 and he’s got good size (6’3”, and if he grew a beard he’d hit 200 lbs.). That size isn’t slowing him down though; he can move between the posts, and he’s a classic butterfly goalie. And he’s got to be happy about the change of scenery. After besting Joonas Korpisalo for the starting spot in the AHL in 2015, he lost the backup spot on the Jackets to him the very next season. With his few chances to reclaim that spot disappearing in a flurry of goals, it must have become painfully clear things weren’t working out there.

I also hope I’m wrong because the Hawks obviously need a viable backup for Crawford. He carried so much weight for the team last year, and it’s inhumane to ask that much of him again. Let there be a competent alternative so the guy can get a fucking rest once in a while. Nor do I want Hawks fans to have any chances to freak out about Scott Darling anymore. I really liked Darling and was bummed to see him go, but if I have to listen to one more person declare he should have been the starter I’m going to lose my god damn mind. A solid season from Forsberg would help those fans inclined to such an argument forget about our erstwhile backup.

For his own sake too, Forsberg needs a good showing this season. Expectations turn to disillusionment all too quickly, and this is his chance to make the leap to NHL-caliber goalie. If he doesn’t, we’ll be asking why this preview wasn’t about Jean-Francois Berube.

All stats provided by hockey-reference.com