Your Friends and Neighbors – ’17-’18 NHL Team Previews: Erik Karlsson and some dudes 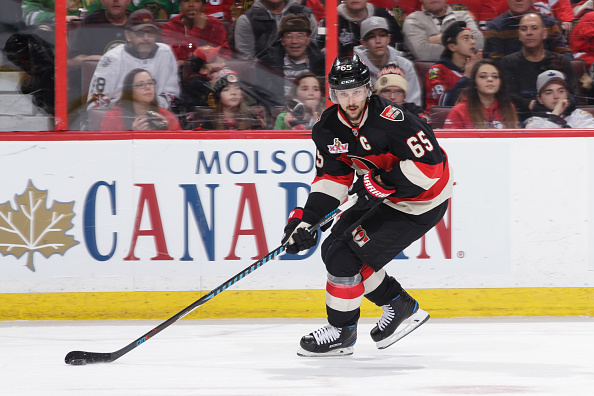 If you asked me what I thought the best move I thought the Ottawa Senators made this offseason was, I wouldn’t be able to answer the question. This team is so damn pointless that I just found out they signed Johnny Oduya this offseason when I was doing my research for this post. Seriously, looking through their roster on their team site and CapFriendly I discovered some players that #1 – I had never heard of and #2 – I am still not convinced are actual NHL players. If it wasn’t for Erik Karlsson I think we’d all forget this team exists. And we’d be much better off for it.

Goalies: Craig Anderson had one of the inspirational stories in hockey last year, and deservedly won the Masterton Trophy. He stepped away from the game for good reason, being with his wife while she underwent treatment for cancer. He returned to the team near the end of January and went on to finish the season strong, with a .926 save percentage and an impressive .942 mark at evens. Mike “Trojan” Condon played in most of the games that Anderson missed and was rather mundane .914 save percentage overall and a slightly better but still flaccid .915 at evens. Anderson likely won’t miss time this year barring an injury, and even at 36 years old should be solid for them in net.

Defense:  The Senators are blessed to have been gifted the best defenseman since Lidstrom when they got Erik Karlsson 15th overall in the 2008 draft. He has risen head and shoulders above the rest of the NHL blue-liners the past two years, and is no doubt one of the five best players in the league today overall. Karlsson has proven to be able to carry this team of nobodies for years, and he’ll probably do it again this year, because the group they’ve assembled around him on this blue line is pitiful.

Dion Phaneuf is somehow still a thing, and still making half a million more than EK65. Cody Ceci was supposed to be something at some point, I think, but he sucks too. They signed Oduya apparently, but as we saw last year his best days are long behind him. After that I am not sure the rest of these dudes are real. I think I have heard of Mark Borowecki, but I couldn’t pick him out of a lineup. There is no way Frederick Claesson isn’t a rejected Game of Thrones character name. Seriously, without Karlsson this is a group of beer league dudes getting caught way out of their depth. But because they have Karlsson they’ll be a middling defensive unit yet again.

Forwards: Welcome to Part Three of today’s episode, “Who In The World Plays For The Ottawa Senators?” I can’t believe how many of these players I have never heard of. They’re paying a dude named Zack Smith $3.25mildo; his career high in points is 36, in 2015-16. They’re paying Clarke MacAruther, he of a combined 8 games played and zero points over the past two seasons, a hefty $4.65mildo. Dumb motherfucker Alexandre Burrows is still around, and then there is something called Jean-Gabriel Pageau. Other alleged hockey players on their roster include Tom Pyatt and Ryan Dzingel.

In reality, though, the Senators aren’t that bad up front. Kyle Turris is a fine center, and entering a contract year at age 28 it wouldn’t be surprising if he had a career year. Bobby Ryan should be able to bounce back from his underwhelming 2016-17 season, although if he gets his comeuppance for being a major shithead and MAGA trash heap, he will blow out a knee or something. Mike Hoffman is legitimately good, and Mark Stone might be. Derrick Brassard is an okay but not overly impressive 2C. So they have some fine top-end forwards, but their depth is a bunch of dudes. Karlsson is still the best offensive player on the team.

Outlook: They still have the best player in their division in Karlsson, and the combination of him and solid goaltending might be enough to keep them in the playoff hunt. That said, they’re well behind Toronto and Tampa Bay (a common theme in this division), and Carey Price is probably going to drag the Habs into the third spot in the division. So the Senators will probably have to either catch lightning in a bottle again, or hope they can do just enough to capture a wild card spot. But starting the year without Karlsson will put them well behind the 8-ball, and if his injury lingers or becomes an issue throughout the season, they’ll have a better shot at the draft lottery than they will the playoffs.