You Share The Same Fate As The People You Hate – ’18-’19 Team Previews: The Knights Who Say Ni 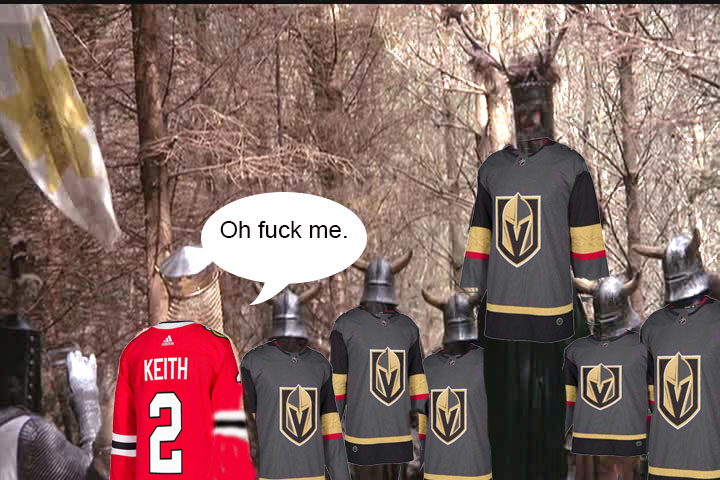 We, or maybe just I, spent most of the season bitching about the Vegas Golden Knights, and specifically how stupid they made the league and really the nature of the sport look. Because they didn’t reinvent any wheel here, despite what some would like you to think. They just put together a bunch of fast players, got somewhat lucky when other teams overvalued complete stiffs and gave them useful parts instead, and then told them to get the fuck up the ice as fast as possible and score. And because hockey is decided on such tight margins, you only need a few bounces and a division made up of partially digested foodstuffs to suddenly find yourself with more than 100 points and in a Stanley Cup Final.

But really, the indictment wasn’t on the Knights but on the league that A.) couldn’t see what the Penguins had been doing the previous two years and replicate it and B.) fanbases and front offices who still can’t see how arbitrary all this can be.

It could very easily go sideways on the Knights, and it wouldn’t take too many of those bounces reversing themselves for it to do so. They’re not getting .927 from Fleury again. Wild Bill Karlsson is not shooting 25% again. Without Nate Schmidt, other teams might discover that this blue line actually sucks, though the Knights system and speed shelters it just about as well as any team can.

But they’re also buffeted against that better this year. And the division still requires golf shoes to wade through. We’re goin’ in…to Sin City…

Goalies: No reason to not run it back from last year, though handing Marc-Andre Fleury the contract extension they did is going to end up with everyone covered in expired pudding (does pudding expire? I can’t even remember the last time I had pudding, honestly. Do adults eat pudding? They do, right? How come I never do? Has it all gotten away from me?).

I know how it goes whenever I say something definitive, as the “Fels Motherfuck” is becoming Chicago lexicon right up there with “Zorich To Linebacker!” But there’s simply no way Flower gets back to a .927 SV% this year. We have 13 years of data to look at with him. His career-mark is .913. Last year’s spasm of godliness was a career-high by six points. Fleury put together back-to-back .920+ years in Pittsburgh in ’15 and ’16, but bottomed out in ’17 with a .908. What exactly he’ll put up this year is hard to pinpoint, so I’ll go safe and general and say it’s probably between his career mark of .913 and .920. Which is fine. Can the Knights do as much with just “fine” in net? Probably not. But they can still be good.

Fleury’s “Starry Season” masked the fact that the Knights also got highly competent work out of Malcolm Subban, both as a backup and when Fleury was hurt. And Subban had struggled in the AHL his last two seasons there, much less the NHL. He’s still only 24, and we know the learning curve for young goalies is steep and treacherous. Maybe last year is a glimpse of what he can be, but the Knights will not be wanting to turn too much over to him this season.

Defense: Whatever you think of Nate Schmidt’s suspension–and you think it’s ridiculous because it really is given his very plausible and backed-up defense–he’s gone for a quarter of the season. It’s a big miss. Which is weird to say, because we’re fairly sure he was never top-pairing quality, and yet he was in Vegas and they were a good defensive team.

So before delving any further into the Knights’ blue line, it’s important to remember how their system protects what is a unit that lacks talent. They aren’t asked to break themselves out of trouble. They barely have to pass. The defense is merely asked to get the puck out to the neutral zone for the forwards to skate onto. It can be the fly pattern or simply a chip off the glass. And because the forwards are so frenzied and make everything look like Smash TV, the Knights d-men aren’t in the d-zone all that much. Their forwards also help a ton on the backcheck. Because they have to.

Because when you look at a list of names like Colin Miller, Brayden McNabb, Shea Theodore, Deryk Engelland, and Nick Holden, we know everyone pretty much sucks aside from Theodore. And the sample size isn’t huge on him yet. They’re not even that quick. But again, the Knights ask of little of them as possible. So every piece of logic and evidence I have says it’s not a good blue line. But it also might not really matter. Fuck, the Penguins won two Cups with defensive corps that were just above mop-bucket residue. It’s kind of the way things are going.

Forwards: Let’s clear this up right now. Jesse Marchessault and William Karlsson are not combining for 150 points again or 70 goals. I just can’t believe that, because alone Karlsson is not going to shoot 25% again. Seriously, the dude had one of every four shots go in. In the past 10 years, only two players have managed more than one 20%+ shooting season, and they are Alex Tanguay (who somehow did it five times and I don’t know why we even bother trying to figure out this world) and Mike Ribeiro. Karlsson has a date with a Lady named “Regression” and she just ordered the lobster.

Marchessault could actually consider himself a touch unlucky, as even with his 27 goals last year he saw his SH% drop from 15% the year before to 10% last campaign. We’ll see what he is this year. The Knights are simply better supported though for any kind of sinking from the top line because the second line is Alex Tuch–Paul Stastny–Max Pacioretty, which is probably their first line when all is said and done. That’s going to generate more scoring than Tuch-Doofus Du Jour-James Neal. Though with Stastny and Patches, it’s probably not as quick but if Neal found a home in this system, they’ll find a way to get something out of those two as well.

The bottom-six is still comprised of the hopped-up gnats it was last year like Erik HAULA!, Cody Eakin, Tomas Nosek, Oscar Lindberg, Ryan Carpenter, and because they have to give away at least one roster spot to galactic stupidity Ryan Reaves is here (please let Gerard Gallant use him with the goalie pulled again. I need as much mirth in my life as I can get right now). The names don’t do much for you but again, they’re all quick and they’re told to be quicker and most teams can’t live with it with their third-pairings.

Outlook: They’re not the Sharks. Regression is going to hit them in a few spots. But with that second-line and all the games they get against the other teams wandering the countryside with no particular plan or urgency, it’s hard to see them losing the 15-20 points that would make a playoff spot suddenly in jeopardy. Maybe Fleury falls completely apart. Maybe Subban can’t bail him out at all. Maybe Karlsson and Marchessault shoot like 7%. But those seem extreme. Second place seems like home, a comfortable 98-102 points. Who who else in the Pacific can you safely say gets there?