You Get What Anyone Gets: Saying Goodbye To The Colorado Avalanche 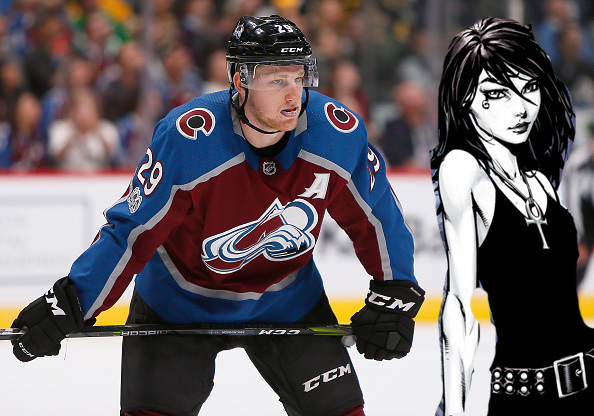 It used to be tradition that playoff exits were complimented by eulogies on Puck Daddy. But with Wysh off in the Connecticut hinterlands and those who remain at Yahoo! being a bunch of Canadian giblets who take things far too seriously (and Lambert being angry and definitely not a Bruins fan), we don’t need them to do what we do best. So fuck it. We’ll eulogize all 15 teams that will eventually fall. And now, perhaps the worst team to make the playoffs in a few years.

I don’t know whether to thank the Colorado Avalanche or hate them, as they provided us with the most St. Louis Blues moment ever. Sure, Duncan Keith helped, but the Avs got to lambaste the Blues on the final day of the season to overtake them for the last playoff spot. It’s truly wonderful, though a moment we’ve all experienced around here once or twice.

The Avs didn’t have to do a Blues impression when they got to the playoffs, though.

Much like the Devils, this was a one line team that couldn’t figure out what it was doing in goal and has a defense that has more holes in it than Bugsy Malone in his current state. So quite what they were doing here is anyone’s guess, but the Hawks, Blues and Stars were so bad someone had to take it. That’s another thing, they helped retire Ken Hitchcock. So are we supposed to be mad at them or thankful? I can’t tell.

The Avs are another example of how dumb the league as a whole can be, as they made a definite seller’s trade by moving shit-eating grin-boy Matt Duchene (somehow to a worse team) for future parts. And the more you watch Samuel Girard the more you think his only use will be more “The Fugitive” jokes. And yet even a team that ships off its #2 center or best left wing for nothing it can use now can make the playoffs in Gary Bettman’s Wacky Weird Emporium Of Stupid. Angry or thankful?

The Avs aren’t nearly as hatable now that Patrick Roy and the permanent electrical charge to his nuts are gone. Gabriel ThreeYaksAndADog has seemingly calmed down from Roy tasering him every night to turn back into the really good winger he was before that collection of gas showed up. Nathan MacKinnon was the best player in the league, though the entire Avs future hinges on him shooting nearly 20% again. Mikko Rantanen does a fine Eric Daze impression, and Avs fans can only hope his back isn’t similarly made out of legos stepped on by the dad in the house and thrown against a wall.

Still, this seems like a team that’s going to keep trying to convince itself that Erik “Golf Polo Warrior” Johnson is a top pairing d-man, and when that doesn’t work they’ll try and do the same with Tyson Barrie, who two years ago they were trying to actively drive out of town/make cry.

This is a land of Blake Comeau’s and Carl Soderberg’s, players who washed out elsewhere but find a home because there’s no one else. Remember, this is still the team that killed Jarome Iginla. They should never be loved. This is the team that saw a .909 from Rinne in the first round and didn’t come anywhere near beating the Preds, because they dressed up an unemployed circus clown in net for a couple games. The Preds wanted to lose this series, other than maybe Filip Forsberg, and the Avs kept trying to shove the invitation back into the mail slot or up their own ass. Thankfully the Jets won’t be so kind.

Goodbye Avs. It was entertaining thinking about you for like a minute. It’ll be more fun when we don’t at all next season.