You Get What Anyone Gets: Saying Goodbye To The New Jersey Devils 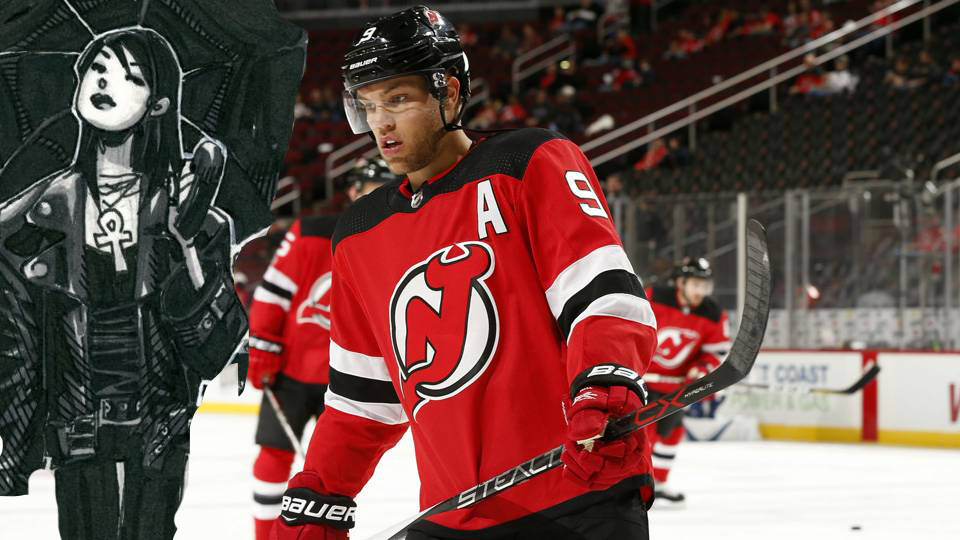 It used to be tradition that playoff exits were complimented by eulogies on Puck Daddy. But with Wysh off in the Connecticut hinterlands and those who remain at Yahoo! being a bunch of Canadian giblets who take things far too seriously (and Lambert being angry and definitely not a Bruins fan), we don’t need them to do what we do best. So fuck it. We’ll eulogize all 15 teams that will eventually fall. Now, the team from where if you were to give America an enema, you’d aim the hose here…

For most of this season, what you heard a lot was, “These aren’t your father’s New Jersey Devils!” I guess the contention was whenever the Devils are anything more than passable the hockey world just assumes they’re the Joy Division of hockey, a funeral dirge of a performance that somehow rose to prominence while everyone involved except for the leader would really rather be doing something more fun while their fans really try and convince you they enjoy it and aren’t totally miserable people. So I guess this version is Hockey New Order.

That assumes two things: One, my father gave a shit about the Devils which he and a lot of other fathers most certainly did not and Two, that the Devils’ brand of hockey in the past didn’t kill exponentially far more dads with its Kevorkian-like methods than those it brought joy to.

Either way, these Devils were more fun, except I couldn’t help but wonder…who gives a shit? This is still a team that plays its games in the second-worst New York-satellite area (the state of Connecticut as a whole being the worst) where no one goes to and those who do sprint the fuck back to the PATH to get the hell out of Newark ASAP when the game is over. Even Tony Soprano wanted nothing to do with the place and he was bleeding it dry. And really, how does New Jersey have a mafia? There’s nothing there to grift! On the other side, you can see how a group that doesn’t want to do any actual work would thrive in a place that doesn’t let you pump your own gas.

Anyway, as for this Devils team, they were Taylor Hall–perhaps the most or second-most entertaining player to watch in the league–a bunch of kids, and a bunch of scrap heap players whose names said aloud always cause you to go, “Oh right, him.” Kyle Palmieri has been here for years, and good, and you had no idea until I just told you that. Patrick Maroon ended up here and you probably thought he had been a Devil for a few seasons because that would make sense, or you thought he was Kyle Palmieri.

Go ahead, name a Devils defensemen. I’ll wait. You can’t do it, can you? And no, Bryce Salvador is on the broadcast team now. And if you came up with Bryce Salvador, I strongly suggest your life needs changes. John Moore is here, and all 12 Devils fans hate him. That’s about all I can tell you about the Devils blue line, and quite frankly I’m not interested in finding out more and it’s my fucking job!

Pavel Zacha is definitely a player they’ve been talking about for a few years, and I guess it’s because he helps carry the torch for the Devils of having the most players with a surname that begins with Z, joining Zajac on this roster now that Dainius Zubrus has gone to wherever people named “Dainius” go. I assume it’s an Eastern European sex club, but I’m not going to investigate as I fear the answers.

Anyway, the Devils made the playoffs with one plus forward and two goalies who were nothing but mediocre. Which I guess you have to hand it to them, as they made an excellent choice in picking a dogshit division while also getting to take advantage of the fact the other division in the conference was somehow way worse, opening the wild card spots. Of course, that always meant they were going to get steamrolled in the first round, and boy did they.

The Devils have been an excellent straight man for the Oilers, given Hall’s MVP-like performance this year. Maybe that’s something they can claim to gain attention. “New Jersey: It’s Salvation From Edmonton.” You can see it on the road signs, can’t you?

This wasn’t in the plan for the Devils anyway, as this was supposed to be a rebuilding season but the NHL as a whole was like, “We’ll show you! We’ll be so bad you have to make the playoffs!” So the Devils will have an excellent chance of being a “disappointment” next year as their development continues, except not enough people would notice for that to be the case. It’s hard to be more irrelevant than the Islanders, so kudos to the Devils for managing it.

Tags: and that's the only player I can name New Jersey Devils NHL Playoffs Taylor Hall