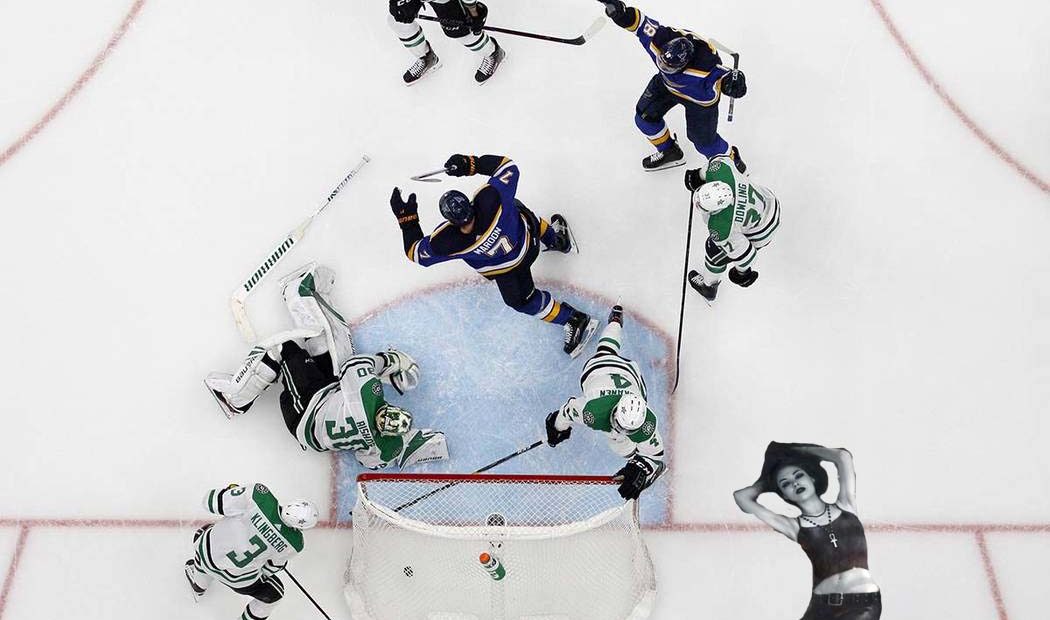 A loss in double overtime in a Game 7. There is supposed to be glory about it. A beautiful death. Honorable defeat. Going out on your shield. Something to earmark and build upon. A loss, but one you can still hold your head high after when the cloud of shock and disappointment clear.

The thing is, that kind of glow requires that you actually try to win the game in the first 60 minutes, not have five Buddhas out there grinning childishly sitting on their collective ass while their goalie is fending off all sorts of threats and creatures by the minute. But that was the Dallas Stars method, who both tried to rope-a-dope and be-a-dope method last night and then were beaten by perhaps the biggest dope on offer, Pat Maroon.

It was all there for the Stars, whose entire style is basically push the dude over after he punches himself out. And there is no more push-over-able dude in the league than the St. Louis Blues. Game 7 at home and finding every way to not score, you could feel the DrinkScotch/Enterprise/Blue Live Matter Center accept their fate. They were going to lose after more than doubling the Stars in shots and almost tripling them in attempts. This was the way it had to be. This was nature. They could barely lift their arms anymore, struggling to breathe as most of their fans do.

But the push never came, as the Stars became so infatuated with short shifts they didn’t bother to do much other than just change on the fly. One player would hop over the boards, maybe get get to within touching distance of the middle of the ice, and then go fleeing back to the bench like a small child seeing how far away he can get from mom before he gets yelled at. Oh sure, they had their chances to win, but that’s the buy-in from the Blues.

So even in a double-OT Game 7 loss, you’d be hard-pressed to remember anything else about the series, the Stars playoff run, or the Stars as a whole. I’m fairly sure their coach is bald. That’s about all I can tell you. Because the Stars essentially became the energy vampires of the Western Conference and happily so. They straight up admitted to copying Barry Trotz’s system and then removing all the whimsy from that.

I guess this is what you do when your GM has had six years to get secondary scoring and has come up empty each time. Perhaps by sheer dumb idiot luck secondary scoring has landed on him through Dickinson, Zuccarello, and Hintz, but let’s not be too hasty. There are a raft of names before them that flashed being able to finally support the top troika of Radulov, Seguin, and Benn and his case of reverse-fear of heights. But they all slink back into the ether, unrecognizable from the other, trailing in Jason Spezza’s apologetic and wheezing wake. Which is how you end up with four goals in 10.5 periods over the last three games and packing for the summer. Which is pretty much how the Stars wanted it, fearing crossing the red line as if it was No Man’s Land. Happy in our trench are we, sang the green-clad throng.

Speaking of Jamie “The Retort To The Downward Spiral” Benn, you have to whisper this because he’s earned such gravitas with the hockey world thanks to always looking like the garbage bag busted all over his kitchen floor, but he’s starting his slide into Future Lucic state. Two goals in 13 playoff games, 53 points in a souped-up league, the lowest amount of shots in eight seasons. He’ll turn 30 over the summer, and the aging curve for power forwards looks akin to drunk dick. The cliff is coming for Jamie, and we know how he feels about going down. Soon he’ll have no choice. Dive for the crevice, Jamie.

The Stars will be confident is being right back here next season, with their hopes built in the sand of a 6-6 goaltender with various hip and leg problems who hasn’t taken a full slate of starts in four seasons. Seems real sturdy, that. Radulov will be 33, and even Seguin is starting to slide out of his prime years.

None of this might matter, as Jim Montgomery continues to abandon his principles to play a system that’s essentially singing campfire songs in a bomb shelter. The margins become so thin, and any long-term injury to THE BISHOP! can undo it all. The Stars could change this if they had any puck-movers on the back end…oh I know what you’re going to say, but it can’t be long before Monty’s system and Texas itself kills the spirit of Klingberg and Heiskanen. Didn’t they fire Hitchcock for this very reason?

This is about as good as it’s gotten for the Stars, and probably as good as it will. Two playoff series wins in 10 years, and both followed by Game 7 spit-ups. One conference final appearance in 20 years. Even the Blues have more, Dallas. Think about that for a second.

The Stars will continue their seeming never-ending journey to/occupation of the middle, that team you stumble upon on NHL Center Ice on a Thursday night and are surprised you haven’t checked in on in a while. Then after 10 minutes you remember exactly why that is. You will merely be intermission acts for Luka Doncic from here on out. Just like you were for Dirk. Maybe you can drop Hintz’s stretcher one day to get anyone to take notice of you.

It was there for you, Stars. Next time, try.