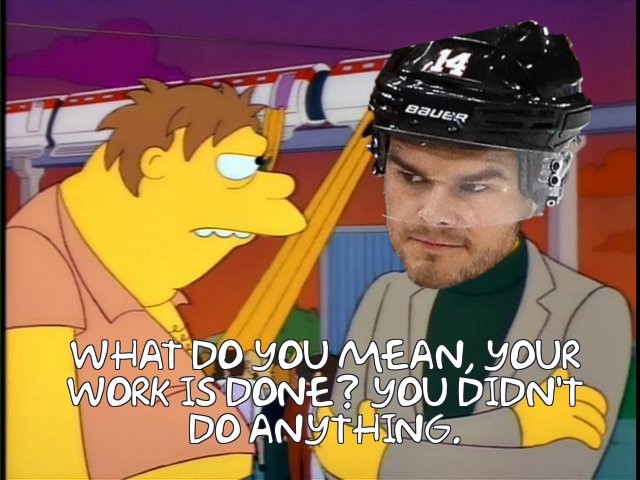 On July 1, the Hawks signed Chris Kunitz, Cam Ward, and Brandon Motherfucking Manning. Of this Triumvirate of Suck, Kunitz was the least odious, both in the moment and throughout the season (probably). He was here, he is gone (likely to retirement or Pittsburgh), and that’s just fine by us.

It took half a year, but once Kunitz got slotted where he belonged, the fourth line, things weren’t a total dumpster fire. He was one of just six Hawks forwards to post a CF% greater than 50 (with Toews and Saad being the only regulars to do so). He managed to do that while spending most of his 5v5 time in the defensive zone (56+%). His 5v5 xGF% was second only to Sikura among Hawks forwards. You’ll take small victories where you can get them.

Also, according to a more in-depth look by Stephen Yatsushiro, Kunitz seemed to not actively hurt David Kampf’s performance when they played together, which was kind of shocking. We all knew Kampf had defensive chops, but knowing that playing with Kunitz made Kampf better metrically was a nice surprise. The entire Krusty Komedy Klassic line was generally fine in its dungeon starts, and Kunitz wasn’t terribly out of place there.

The Kunitz signing was redundant for any of the reasons you can think to sign a guy like 39-year-old Chris Kunitz. If they signed him for his grit, they already had Andreas Martinsen to do it more dumbly, Luke Johnson to do it more moon-facedly, and John Hayden to do it more arrogantly.

If they signed him to be a fourth-line grinder, see above, and then add Kampf, Kruger, and any other number of IceHogs who could have done the exact same thing.

If they signed him for his veteran leadership, why? Toews, Seabrook, Keith, and Kane have all won three Cups. Crawford and Saad two. Does winning a fourth Cup as Sidney Crosby’s passenger matter that much?

His contract wasn’t a back-breaker (though the NMC was curious at best) or anything. It was just fluff. Kunitz just seemed like a guy Bowman (or Q) wanted to have for REASONS. If you want to point to his play on the PK, why? That sucked too.

There’s no reason to re-sign Kunitz, just like there wasn’t a reason to sign him in the first place. He’s had a nice career, and the players seemed to like him, so great. He was here and then gone. He certainly wasn’t good, but he wasn’t as bad as he could have been. And that’s probably the best way for his Hawks career to end.