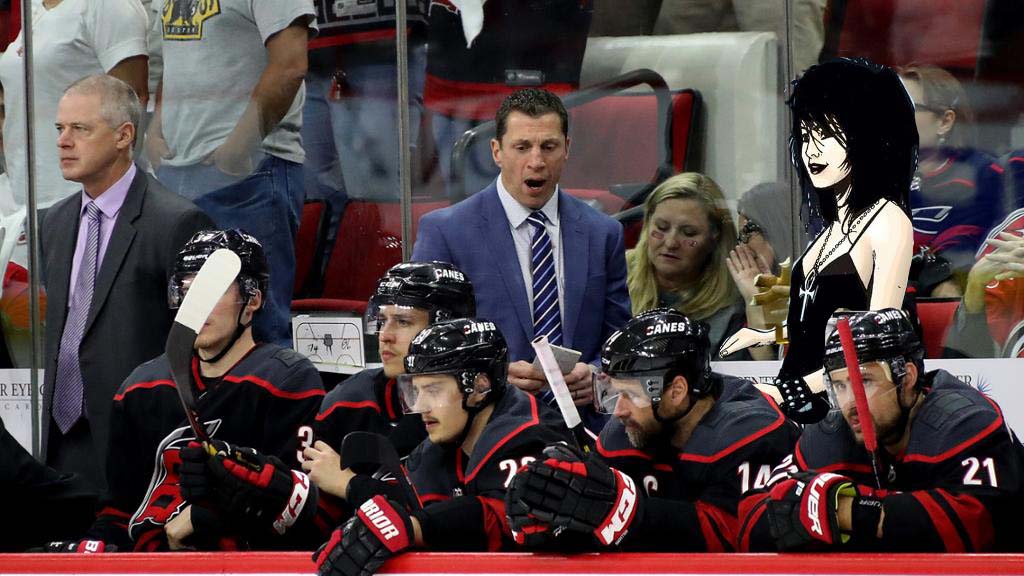 Once again, fun loses out to evil.

There’s something about poetic about the way the Carolina Hurricanes bowed out this spring. For years, their supporters and analysts have said that if they only had a top line and a goalie, they would be a Cup contender. All their metrics pointed to a really good team of a hive mind, but they couldn’t rise above. And they were also the cudgel that the anti-analytics crowd could use to prove their covered-in-dust tenets. “Well if these mean so much,” they would belch,”why does a team like Carolina never make the playoffs?”

And for a brief moment in the sunshine there, it looked like the Hurricanes might prove them all wrong. Oh, they got there because they got goaltending for once, and Sebastien Aho played like a top-line player. While it took seven games, they were clearly better than the Capitals. They ridded the world of Trotz Plauge, and we can all be thankful for that. Could a system and style win out over what we know to be true? For all the bloated cries that hockey is the ultimate team sport, would the Canes finally be the collective to overcome the brightest lights?

And then they were thwacked by a genuine top line and a goalie. There are some truths that you can’t ever get around, and any attempt will leave you seeing stars from the back of their pimp hand.

It probably didn’t help that Mr. Game 7, Mr. Leader, Mr. Playoffs, Mr. Man Justin Williams, who invented the Storm Surge and seemed to embrace actual fun and created perhaps the most unique team atmosphere in the league, only needed to be in the same zip code as Brad Marchand to become skinny David Backes. We don’t understand Torey Krug either, but we also don’t understand an urge to crack him open on the ice to see if he’s made of bugs. Not quite the tone of a leader. Tell you what Canes, why don’t you take on Brent Seabrook to talk Williams down next time? On us.

Still, you have to admire the balls on the Canes to attempt to get out of the East with Jordan Staal as a second-line center. It’s a bar bet, and they came closer to pulling it off than you would have guessed. You can’t crash harder out of that though than him wandering into Jaccod Slavin and dislodging the puck from him like an abandoned drunk at 3AM on Clark St for the Bruins killer second goal. That was just about his biggest contribution to the series. Staal has made many millions convincing people he was more than just a checking center. He’s a magic trick. He is Kaiser Soze.

The Canes were the thumb in the eye to hockey jackasses like Don Cherry, but then fell at the worst possible hurdle, which is Cherry’s favorite Bruins who go about things “the right way.” (which means Cherry likes to lick people, so there’s an image to keep you from sleeping for a month). Now we’re doomed for another year of gloating from grunt-farters (or fart-grunters). Thanks a lot, assholes. You couldn’t have lost to a worse place, where you dismissed for having a southern accent or by beat writers somehow shocked that the local establishments, 0n Tobaccos Road mind you, would have basketball on the TVs on a non-game night. You had a chance to finally put these provincial fuckwards in their place and you whiffed. Now you’ve just added to the pile they draw from. And we’ll all pay.

The problem with being what stands for all that is righteous, fun, and good in hockey is that not only are you doomed to fail (except for Ovechkin once), but your shelf-life is akin to a butterfly’s. Next year, as the Canes struggle to come up with more celebrations for wins among the group 7th-grade education hockey players have, they’ll be increasingly met with eye-rolls instead of chuckles. They’re “Bunch Of Jerks” shirts will go from ironic to a statement of fact to an increasing amount of people. Nothing lasts in the NHL, especially fun, because that means you either have a brain or don’t eat bricks in the summer getting ready for another season.

It’s all there for the Canes, of course. They’re a fun, young team that just made a run and should be an attractive destination for anyone. You may think Raleigh, N.C. isn’t a place players want to go, but lucky for the Canes it’s less of a shit-kicker town than where most of these dumbasses grow up. If you don’t think it compares favorably with Swift Current or Kitchener, then you must be a Canadian hockey writer. A goalie, a top-line player or two and the world would be theirs. They could be what the Predators have told us they are for years but actually aren’t.

Sadly, the Canes have as big of a shithead owner as you can, who folded up an entire football league and then when anyone asked pulled the, “What league?” defense. There’s also Don Waddell, whose previous GM stint went so well the team up and moved away from the city in order to lose him. Between Thomas Dundon (how amazing is it that his name is the exact same sound as the organ beat when evil descends?) and Waddell bashing their heads into a wall I think we all see a Brian Boyle signing coming.

So fare thee well to our dearest, sweetest boy and his companion. As always, you were too good for this world. At least your current team won’t trade you for not spending the offseason in Carolina.