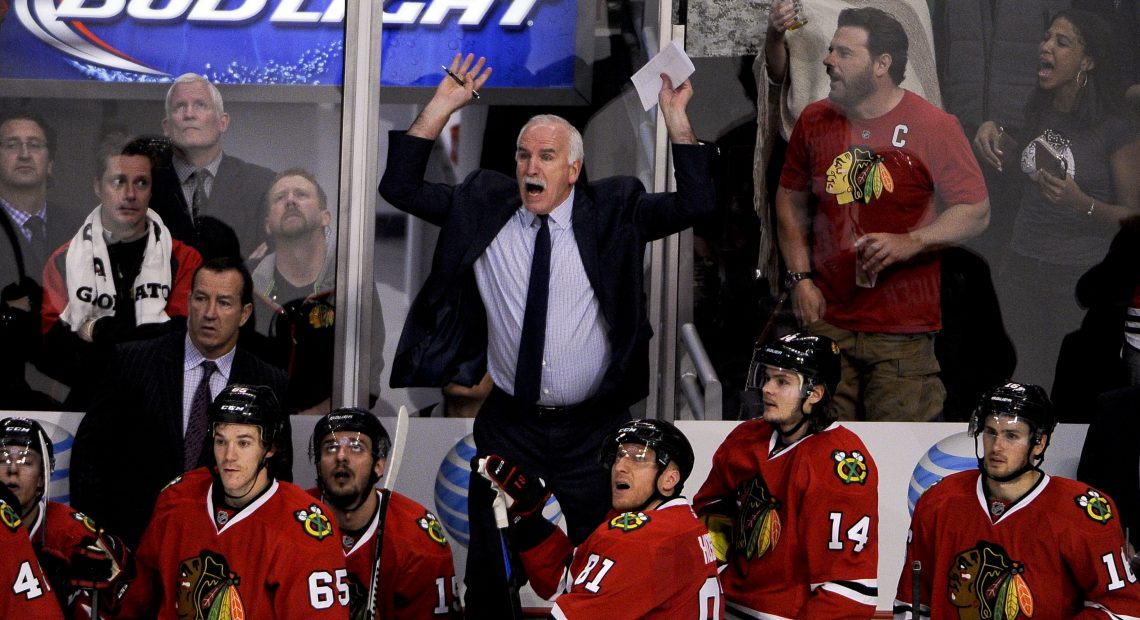 I didn’t realize this as I walked in to the building last night. It had been 10 years since I arrived at the United Center seeing what a new coach had in store for the Hawks. In that time, I’ve done that at Wrigley five times. If you’re the other baseball color, you’ve done that three times in that amount of time (seriously, how was Robin Ventura manager that long?). The Bears have cycled through four coaches. Strangely, the Bulls have only gone through three. It still sounds so strange to say that in that span, the Hawks were by far the most stable Chicago sports team.

So in that sense, I knew what the reaction of the UC crowd would be. There wasn’t any vitriol toward Jeremy Colliton himself, because let’s be honest, most everyone doesn’t have any idea who he is. For most Hawks fans, they’re probably only barely aware that they have a minor league team, that it’s in Rockford, and that Colliton coached it. And that might be even giving them the best of it. And that’s fine. Could most Cubs and Sox fans name their Triple-A manager in Iowa or Charlotte right now (sit down, Fifth Feather!)?

I’ve thought about this a lot the past few days. It seems in these kinds of fights, fans are almost always going to side with the coach. Because the coach is the one they see every game. He’s in front of the press every day, after practice, after games, all of it. He’s the one you get a connection to. The only example I can honestly think of that goes against that is the current Cubs, and that took Theo Epstein getting here first, having the resume he does before he even took the job, and Joe Maddon’s fascination with his own voice rubbing pretty much everyone the wrong way. How many people in this town still worship Ditka? And he was unquestionably an idiot who cost the Bears championships!

And when the Hawks were rolling, even in the middle of a season, you didn’t walk out of the arena saying to yourself, “Man, Stan Bowman really has this team humming!” You walked out marveling at how well-oiled Joel Quenneville had the machine. Because he was the one running it. He was the one actually driving the car, even if he didn’t build it. Or all of it, as we know how things worked on Madison St.

And that’s what forms the stronger, emotional bond for fans. Whether you know it or not, you see the coach’s work pretty much on a daily basis. You only really see the GM set up the board. He doesn’t move the pieces. Fans were always going to be attached to Quenneville, and to whatever extent that might have skewed or blinded them to what’s going on on the ice, that’s what the Hawks now have to navigate through.

And even if we here or just me are some of the leading voices in the Q-had-to-go camp (if not more than a little surprised at how early it came), I didn’t skip into the building last night. While I was curious and excited to see how this team will respond to Colliton (and they were faster and more creative), the overwhelming emotion was sadness. That a big part of it is all over. Not just the window or the era or however else you define it. There was a feeling, one we haven’t had much as Hawks fans over the past two or three decades, that’s now officially part of history.

Because there was a six- or seven-year stretch, maybe even eight, where the Hawks were basically the control of the group. They were stable, and in that stability were a force. You knew exactly what you were getting. Sure, there were a lot of bumps in the road and drama here and there, but for the most part the Hawks didn’t only win games, they won them methodically and coldly. Winning was just this thing they did. And the joy you got from it or the buzz came not from the wins, or not just the wins, but how ingrained or efficient or systematic those wins came. The machine just kept moving on. The assuredness that the Hawks would be good, it was now the natural state of things, you drew strength from that as a fan.

Q also rode in as something of a savior. Not in the traditional sense. But when he arrived, you knew the Hawks had an abundance of talent and were capable of something special, it was just so loose then in 2008. It was barely roped together. It was winning games back then on the sheer force of its talent, not by any system. And Quenneville banded it together into one being and momentum almost instantly, so assuredly. It was calming. It was only 19 games into his tenure here that the Hawks ripped off nine in a row, outscoring their opponents in that streak 41-12. It was barely six weeks in charge, and he already had that team capable of that kind of punch.

And whatever I might have said or thought about it at the time or now, Q was at the helm of that. Maybe he wasn’t the biggest reason, but he was doing the steering. However he got there, Q put the settings in place that kept it moving smoothly and dominantly. It felt like a lot of teams lost the game before they even hit the UC ice. Sure, maybe the suspense was gone some nights, but in the best possible way. The Hawks were going to show up, do their thing, and most teams were just about powerless to stop it. They could try everything. The Hawks did what they did and barely noticed anyone else was there. It was impersonal as it was authoritative.

And that’s gone now. Perhaps Colliton gets there one day, and we’ll get that feeling again. And maybe the journey there is just as fun as it was last time. Maybe it’s longer. Maybe it never gets there.

But that sure-feeling is gone. It has been for a while. It’s just official now. And I can understand the lashing out from those who miss it. Part of me wants to, too.