High On The Hog: Meet The New Boss 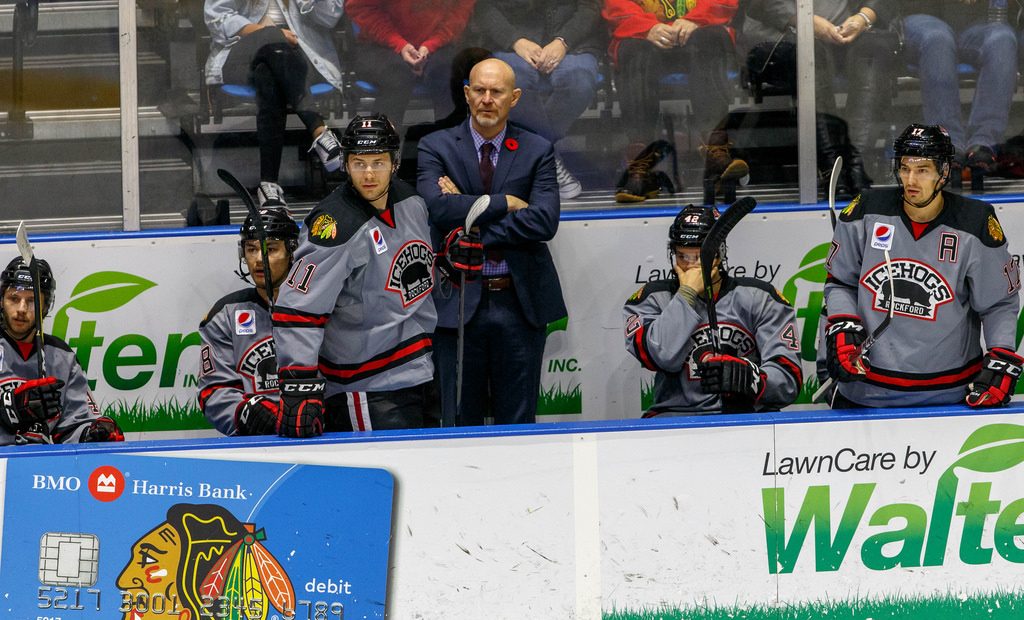 The Rockford IceHogs are opening up their longest road trip of the 2018-19 campaign this weekend. The piglets are currently 6-4-1-2, good for a .577 points percentage and fourth place in the AHL’s Central Division. Of course, the big news out of Winnebago County is that Rockford has a new head coach.

Following Jeremy Colliton’s ascension to the head post in Chicago, The IceHogs named assistant Derek King Rockford’s interim head coach. King has been in the organization for two years prior to this one. He served on Ted Dent’s staff in 2016-17 as well on Colliton’s staff last season.

A more than capable offensive forward with a 14-year NHL career as a player, King was an assistant for the Toronto Marlies for six seasons before coming to Rockford. This is his first shot at helming an AHL club.

How will King fare with the piglets for the remainder of the season? At the moment, he inherits a banged-up group that may be getting some key players back in the coming days. There are several new faces coming in, with Rockford signing a couple of skaters to tryouts this week.

If Hawks GM Stan Bowman fortifies his squad like he did for Colliton in the second half last season, he should do just fine. If they don’t, the organization will have to assess how far King has progressed a young team before talk of a permanent position can commence.

For all the talk of Colliton’s magic touch with Chicago’s prospects, one must not forget that it was the influx of veterans and NHL players late in the season that propelled the IceHogs to the Western Conference Final. Without the nudge from management, Rockford is a fifth or sixth-place team in the Central last season.

This isn’t a knock on Colliton, who had the youngsters playing hard. However, don’t expect King to get this current roster deep into the playoffs without similar help from above. Check out last season’s year in review to see how the roster transformation affected Rockford’s fortunes.

It appears that King wants to foster an atmosphere of competition among his players. Even with several injuries throughout the lineup, there are plenty of options for the new boss.

McArdle and Manning returning to the Fuel likely means that some of the injured defensemen are ready to come back. Andrew Campbell, Carl Dahlstrom, Gustav Forsling and Luc Snuggerud all have missed time of late. I’d guess one or two of those players crack the lineup this weekend.

A school-aged audience came out to the BMO Harris Bank Center for a 10:30 puck drop. Unfortunately, the Hogs were blanked in Derek King’s debut as top man on the Rockford bench.

The Wild power play struck late in the opening period, with Cal O’Reilly finding Sam Anas skating to the right post. Hogs goalie Collin Delia left the back door open and Anas gave Iowa a 1-0 lead at 17:17 of the first.

Colton Beck used a second, and then a third effort, to knock a puck past Delia 2:47 into the middle frame for a two-goal Wild advantage. O’Reilly converted on an empty net late in the game to complete the scoring for Iowa.

The IceHogs had no solution for Kappo Kahkonen, who made 28 saves while picking up his second win over Rockford in five days. Kahkonen was voted the game’s first star.

The IceHogs pulled out an overtime decision over the Admirals in Milwaukee just last Friday. Darren Raddysh was good for a pair of goals in Rockford’s 3-2 win at UW-Milwaukee Panther Arena.

Milwaukee is now in third place in the Central Division. The Ads dropped games in Grand Rapids and at home to the Wolves since falling to the IceHogs.

Zach Magwood accounted for both Admirals goals last week against Rockford. The rookie has four points (2 G, 2 A) in six appearances.

In a far-away land of magic, rainbows and quality deep-dish pizza, a grail was forged from the fires of vulcanized rubber. An ethereal chalice to be sought after by those that glide on ice in search of excellence. Unfortunately, no one knows where this emblem of pure victory is currently located. In its stead, these Interstate 90 rivals will be battling for the Illinois Lottery Cup.

I’m pretty sure the Wolves are in possession of the ILC at the moment, having won the tie-breaker in last season’s series with the IceHogs. As a small measure of vengance, the Hogs swept Chicago in the first round of the Calder Cup Playoffs last spring.

The Wolves are tied with Iowa for the Central Division lead. They’re 8-3-0-1, on a two-game win steak and the Western Conference’s most potent offensive team. Chicago is putting up 4.17 goals per contest and are doing a lot of that damage at even strength.

European import Brooks Macek is tied with Cleveland’s Zac Dalpe for the AHL lead in goals (12) and points (19). Bolstered by five power-play goals, Daniel Carr (8 G, 10 A) is right behind Macek and Dalpe in scoring. Both Macek and Carr are plus-18 just 12 games into the season, which also tops the AHL. Center Gage Quinney (7 G, 5 A) is merely a plus-16 so far.

As if the Wolves didn’t have enough offensive firepower, they return Brandon Pirri (4 G, 9 A) and T.J. Tynan (4 G, 8 A) from last year’s club. Curtis McKenzie (2 G, 9 A), captain of the Texas Stars last season, comes to Chicago to add to the veteran talent.

Follow me @JonFromi on twitter for updates on this weekend’s action, as well as Hogs-related thought all season long.