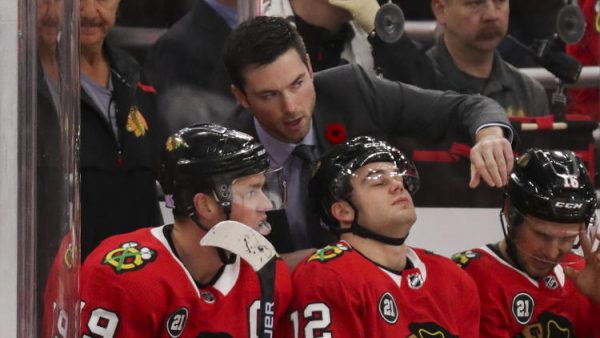 And the Jeremy Colliton era begins! So much hope, so much excitement, so much resentment by large numbers of people and…we got reminded how much the defense sucks regardless of the coach. Let’s get to it:

– Let’s set aside all of the wailing and teeth-gnashing over Quenneville’s firing because we’re going to hear about it again everywhere, from Twitter to the Score to the Metra platform tomorrow.  The first period was really the awful one where their defense dug them into the hole from which light could not escape. And you know that the giardiniera-soaked masses will take this performance as proof that DEY SHOULDN’A GOTTEN RIDDA Q MY FRENT. In the reality in which we live, however, the Hawks are still dealing with the same amount of talent that they had as of Monday afternoon, and that was made clear tonight. Far too often in the first (and to a lesser degree, the second period), the Hawks avoided the front of their own net as if they had a life-threatening allergy to providing Crawford with some support. By the time Calvin de Haan waltzed in for the fourth goal early in the second on a power play, Crow was so pissed he destroyed his stick on the net like Pete Townsend smashing a guitar.

– Beyond just hanging their goalie out to dry, the Hawks’ defense did other dumb shit such as Erik Gustafsson making multiple bad turnovers early on, and Henri Jokiharju taking a needless penalty, with Keith kind of contributing to it, which led directly the second goal. I’m sure Jeremy Colliton knew what he was getting with this defense—particularly since he sat Brandon Manning so this guy’s already OK in my book—but it was the harshest possible welcoming to the defense that is now his albatross.

– Alright, the defense sucks, we know that. Time for some positives. The Hawks were down by four goals and actually made a game of this, which tells you how shitty Carolina’s defense is, but also that not all is lost with our offense. Saad scored a pretty one (technically Kampf got credit for it but it was his ass being in front that scored, Saad did the actual work), Schmaltz did too (SEE DUMMY, SHOOT SOMETIMES), and Kane lifted TVR’s stick just enough to knock the puck in from the crease.

– On a related note, guess what guys? Trevor van Riemsdyk still sucks! In addition to Kane’s maneuver, Schmaltz also burned him in the third on his goal. Same as it ever was.

– Speaking of Patrick Kane, Colliton rode him like a rented mule tonight. Can’t really blame him either. Kane was out there for an entire power play (fine, cool, whatever), and had just over 22 minutes of ice time. The power play didn’t make huge strides but at least Kane was out there with some right-handed shots. As Sam said earlier, baby steps.

–Marcus Kruger got his knee disemboweled by Clark Bishop basically taking his feet out from under him. Kruger hasn’t exactly been lighting the world on fire lately but the last thing this team needs is LESS depth, or for the defensive-zone-starting stalwart to be out for any length of time. It looked incredibly painful and shitty though when he hit that post.

– Back to the giardiniera-soaked masses, they’ll surely be rabid about how well Scott Darling played while Crawford gave up four goals in barely more than one period. Nevermind the fact that, as discussed, the Hawks defense completely screwed Crawford over, or that he had multiple fantastic saves after the Pete Townsend impression. If you come across one of these people tomorrow, ignore them and move on.

So it wasn’t exactly the strongest start to this brave new world, but we all knew the defense blows, and seriously Colliton has had barely 48 hours with this team. Remember, he benched Brandon Manning so there’s GOT to be hope. Onward and upward.