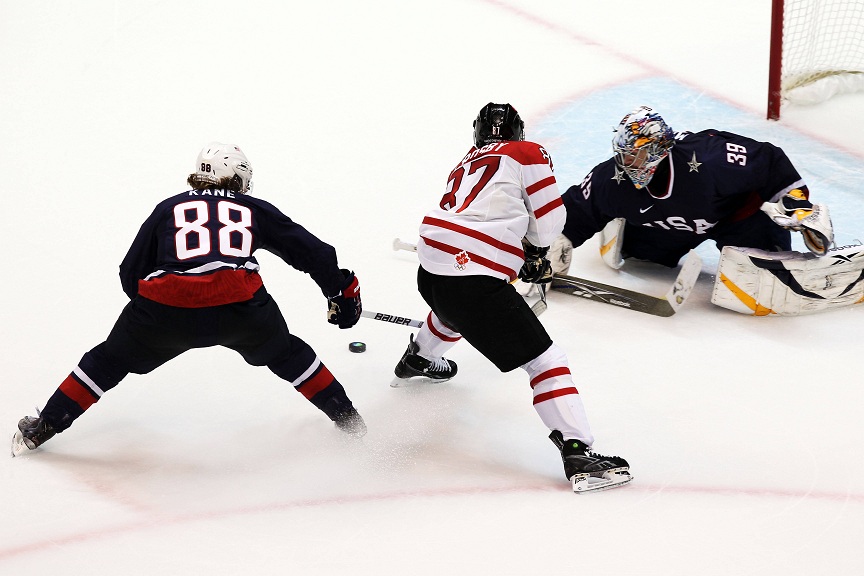 The first disconnect comes from conflicted rooting interests. Olympic competition seems to bring out the latent jingoism in the hockey world, particularly from our friends to the North, which I find irritating from all parties. While a good deal of it might be in jest, believing that a sporting match is reflective of any country’s superiority over another, in any regard, is patently ludicrous.  I guess by that same token not openly rooting for the American squad somehow makes me less patriotic, but it’s something I’m learning to live with. Truth be told, in watching international competitions, the team whose style I find most enjoyable to watch is the Finnish team’s, but it’s simply not acceptable for an American of Irish and German descent to root for a team with no other stake in. On top of that, it’s more difficult for people to hurl meaningful insults at you when the outcome of the game is of no emotional effect. In fact, during most Olympic competitions, I more often than not have found myself rooting against a particular country whose fanbase’s behavior during a given Games is particularly annoying. And if that’s the case, then clearly I’m better off not watching.

Along those same lines, even if I did have a rooting interest, American, Finnish, or otherwise, it is far superseded by my NHL rooting interests. The very idea of wishing success for Ryan Kesler or David Backes is stomach churning for me. From my vantage point, one that’s probably shared with owners and GMs across the league, the only purpose the Olympics serve is opening a two week window of high-risk, zero-reward games that have no effect on the teams that are paying the players handsome amounts of money.

Even from an aesthetic point of view, the international game bores me as well. The enlarged ice surface creates more space for making plays, but also creates more room for players to hide. Yes, the person who has banged the drum louder than anyone else that hit stats are bullshit (they are) and that NOT BEING PHYSICAL is fine (it is), thinks that the Olympic sheet fosters too floaty of a game. Seeing feats of skill materialize from little to no space to operate is far more impressive. Not to mention that many of the nations involved boast All-Star caliber rosters with no cohesion, and are given the space to freelance and often times look incredibly sloppy and lackadaisical doing it. The expanded square footage dilutes the urgency of every stride, every pass. And on top of all of that, games of consequence can be decided with a shootout.

There’s also the inherent problem with the Olympic machine as a whole, who have a recent track record of leaving host cities completely up to their ass in debt after leaving, despite being promised a full recuperation of costs which the IOC never ever assists with.   The storied history of corruption from the IOC would make Jeremy Jacobs blush and have Bill Wirtz wince from beyond the grave. And on top of all of that, the IOC has basically supported all of Russia’s reprehensible anti-LGBT laws with threats of disqualification for voicing any kind of opinion on it, all for the sake of making themselves money.

None of this is to tell anyone else to not enjoy all of the pageantry and spectacle of the Olympic Games and its hockey tournament with a cornucopia of NHL stars (and Ilya Kovalchuk) come February. But I certainly value my sleep far too much to be getting up at 5AM to watch live games.