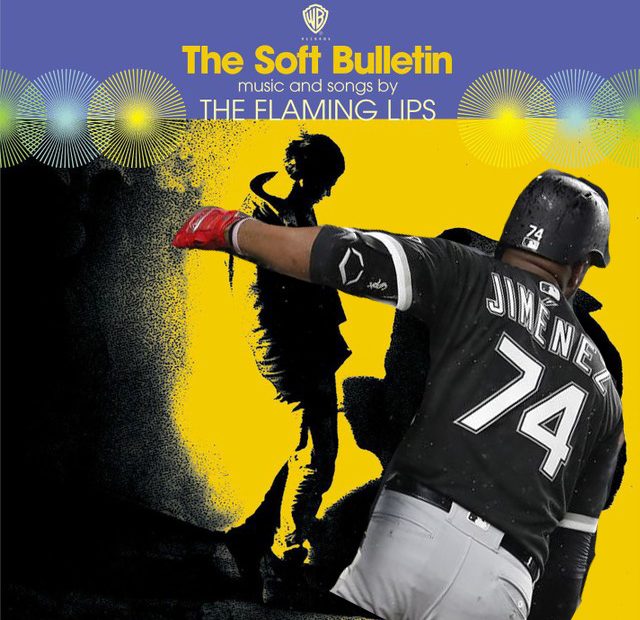 I know where this will go. I’m just a bitter Cubs fan tying to rationalize to himself the trade of Eloy Jimenez. And I’ll cling to anything and everything like Linus’s blanket that will make it ok in my mind while Eloy spends the next decade raining projectiles onto the Dan Ryan. Feel free to think this.

It can be universally agreed, I think, that Eloy Jimenez has had something of a choppy rookie season so far. There have been flashes of brilliance, mutant power, and intelligent approach while at the same time a heavy slapdash of whiffs, curious decisions, and at times bad luck. All of it has led so far to a tick above average 107 wRC+, and a pretty on the nose of average .330 wOBA.

There’s little doubt that Eloy is going to be a very good player one day, perhaps even great. There’s probably a little more discipline at the plate to be harvested, which should lead to better pitches, which should lead to more balls landing the in the shrubbery. Another spin or two around the league couldn’t hurt either.

But looking up Eloy’s numbers this year, I was struck by something weird for a player with such obvious power. Eloy doesn’t hit the ball very hard, at least not consistently. Yet ≥

Jimenez currently has a 35% hard-contact rate, which isn’t terrible but isn’t anywhere near what you would expect a genuine slugger to have. For reference’s sake, your leader in hard-contact rate is Christian Yelich at 54.6%, though no one would expect Eloy to already be performing at an MVP-level. Eloy’s 35.5% mark would rank 123rd in the Majors if he qualified, right in between Andrew Benintendi and Kevin Pillar. Fine players to be sure, but not exactly where you picture Eloy.

Eloy’s line-drive rate of 14.5% would also be borderline abysmal, though you wouldn’t fret much about it if he were hitting a lot of flies hard. Which he’s not.

Statcast-wise, it’s not a prettier picture. Eloy’s average exit-velocity of 90.3 MPH is good for 108th in the league. His barrel-percentage of 9.9% ranks 98th. Again, you wouldn’t expect Eloy to already be among the giants of the game, but given the power he has flashed at times you would think he would be making more loud noises more consistently, even if they didn’t always produce runs. Which leads one to believe his .271 BABIP isn’t really all that much bad luck

It’s a little tricky to see why this might be, but let’s try. For one, with over half of Jimenez’s contact on the ground, you might conclude that he’s had a roll-over problem (much like old Jeeps). And that seems to be the case. When Eloy puts it on the ground, 63% of the time he’s pulled it. Conversely, he gets the most amount of fly balls when going the other way, or just about half the time. It’s not that Eloy doesn’t have power the other way, he should just have more of it.

Right now, when going to right field, Eloy only has a 24.5% hard-contact rate, though a better than normal 19.5% line-drive rate. Strangely, the numbers are even worse when he pulls the ball. The hard contact is just about the same, but the line-drive rate is a measly 11.1%. How can a guy like this not be producing line-drives when pulling the ball?

If you’re about to suggest that Eloy should have a more Goldilocks approach, I’ll stop you and say you’re right. When he stays up the middle, his hard-contact rate is 54.2%. Now we’re talking.

Of course, it’s not that simple. You can’t just hit anything up the middle, it depends on how you’re being pitched. And based on where Eloy’s power has been, it’s a tougher riddle. Eloy is something of an iconoclast this year when it comes to hitting. Most hitters these days have found ways to lift low pitches for power and are vulnerable at the top of the zone. Not so much with Eloy: 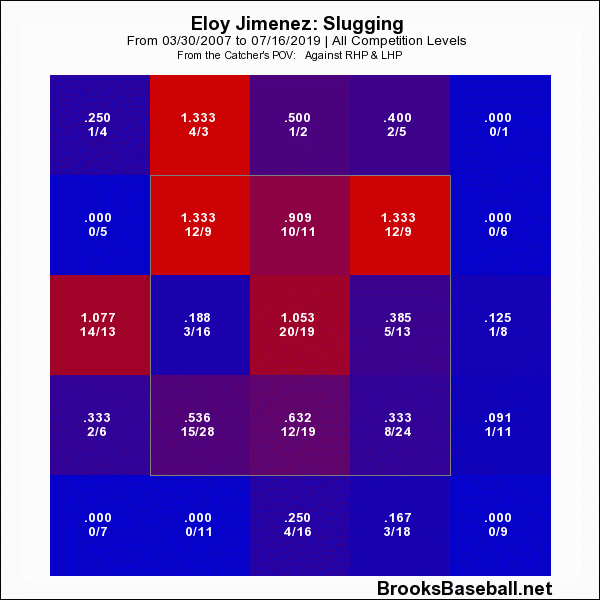 But, MLB pitchers being what they are, Eloy doesn’t see a ton up there. This is where Eloy sees fastballs: 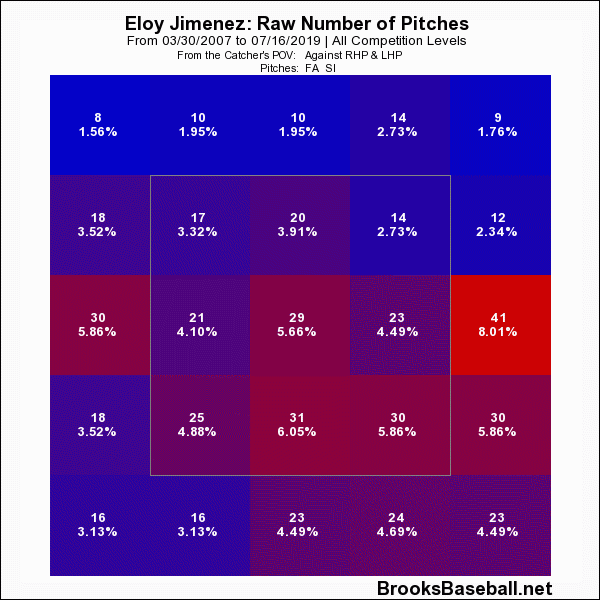 Mostly not up. And weirdly, he’s turning a ton of them into grounders: 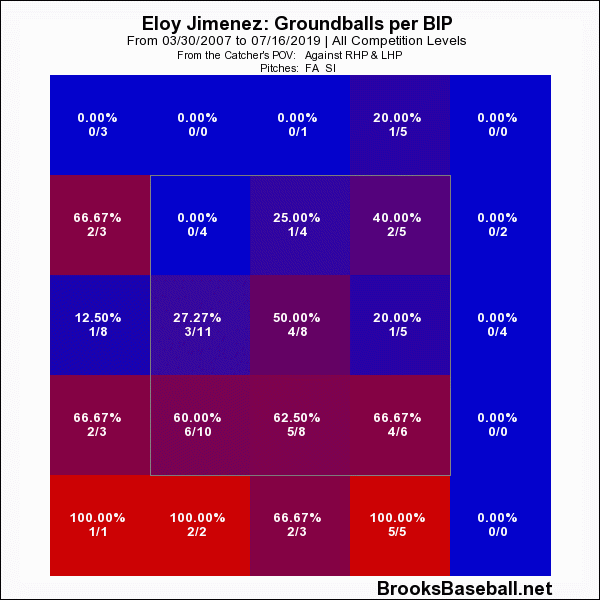 As you might have already guessed, Eloy sees almost all of his breaking pitches low and away, and his only power off of them has been on mistakes that hang in the middle or high in the zone. That’s going to be true his whole career.

Eloy needs to stay up the middle for a while, and figure out how to lift low fastballs. Which I have no doubts he will one day. Because someone like this should have better contact numbers, even in this nascent stage of his career.