The Arty Dump Is Upon Us…Wait What? 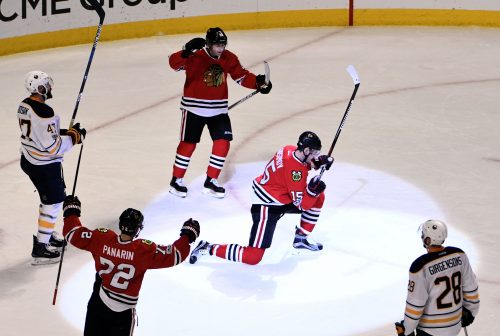 It probably should have happened a year ago, if ever at all, and you knew it was coming for sure as soon as the Hawks drafted Kirby Dach. The Hawks needed cap space, they needed a space for another center either this year or next, so off Artem Anisimov had to go. And today he did to Ottawa, for Zack Smith. The headline of the deal is that the Hawks will save $1.3M in space over the next two years. I’ll forgive you if you don’t vomit with joy.

On the surface to the uninitiated, it will look a little strange. After all, Anisimov managed 20 goals in three of his four seasons here, and was in between Kane and Panarin when they were setting off all sort of fireworks together for two seasons. To the dedicated observer though, Anismov’s numbers were something of a mirage. He was a plug-plus at best who could barely move and had decent hands around the net. His goals and points were accumulated through the Nuno Gomes method, which is where you let far more talented players ping pucks/balls off of you into the net and you get to take the credit. In a league that’s only getting faster, Anismov’s place became more and more precarious, and he was hardly cut out to be a bottom-six winger as he was at times last season.

Anisimov’s extension will be another cudgel to beat Stan Bowman whenever he is fired or leaves, though those in the know will tell you orders came down from on high on that one to appease the angry masses about the first Brandon Saad trade. Whatever, it’s over now.

Of course, this being the new Hawks ethos, they got a plug in return. They’ve been chasing Zack Smith for years, with rumors of them calling the Senators about him stretching back to at least 2013. He’s got that precious size, except he doesn’t do much with it anymore and he isn’t very quick either. Smith has only managed 20 goals in the league once, where he shot 20%. The past two years he’s pretty much been between a third- and fourth-line contributor, and while listed as a center I have to believe at his age they see him as a wing now. Otherwise you’ve basically made a lateral move for a fraction of cap space now and next year.

Metrically, Smith hasn’t been of any use in a couple years, though he was getting dungeon-shifted by the Sens last year and you might imagine that’s the plan here whether he ends up skating with Kampf or Carpenter or both. Or maybe the Hawks are planning to move him along as well to open up even more cap space. We’ll see.

Smith can certainly act as more of a checking center than Arty ever could, though that would give you 2.5-3 checking centers in Kampf, Smith, and Carpenter. So you’re depth chart looks something like:

Let’s just say there are options on the bottom-six, and that’s even without the longshot of Dach making the team. Again, it’s not that likely that Smith is at center these days, so the most likely solution is Kampf and Carpenter taking the last two center spots, with an outside shot of Caggiula taking some fourth center time (they wanted to try it last year, or so they said).

So there you go, the Anisimov Experience is over. The first Brandon Saad trade now has netted you…well, nothing.  A couple of 20-goal seasons that stood for bupkus. Great work all around.