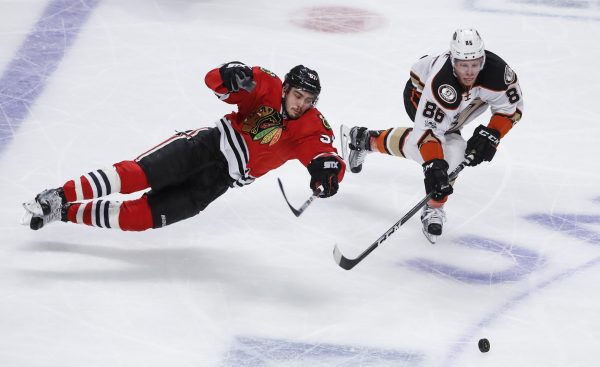 -So to the first point of the night. Hammer and Oduya were matched up against Getzlaf’s line and Kesler’s line pretty much equally. Some of that probably had to do with the Getzlaf’s instigator against Wiener Anxiety. Against Getzlaf’s line, everything was fine. Against Kesler’s, with Silfverberg and Cogliano on the wings, it most certainly was not. Check Natural Stat Trick if you don’t believe me. One game, no conclusions to be drawn, just watch the next time they’re asked to deal with a ton of speed on the wings.

-On the plus side, Keith and Seabrook were mostly assigned to Kesler’s line, and were way in the black on things. This is the model. And normally the one goal Hammer and Oduya concede won’t be the only one of the game.

-Speaking of which, it was something of a misplay by Hammer. He got outside the circles to try and deal with Perry, and add to it he didn’t get his angles right, which left Perry all the room in the world to cut to the middle. There were two Ducks on those boards to deal with and perhaps Hammer feared getting beat to the outside, but that’s still less dangerous than the human form of flaccidness getting to move to the circles and tee one up.

-This was one of the few games I didn’t notice Ryan Hartman between the whistles. I understand trying to get Jurco’s greater skill opposite Hossa to maybe make things happen, but give us the Two H’s again, please.

-On another night, the Hawks end up with a couple power play goals. They were much better with movement tonight than usual, which saw all five skaters occupying every spot at some point. Panarin didn’t anchor himself waiting for one-timers (the Patrick Sharp ploy) and was willing to rotate through the high slot and confuse things. This opened up more space in front, and the Hawks nearly profited.

-Like a Randy Carlyle team, the Ducks went out of their way to “assert” themselves, which of course saw them chasing all night. What’s infuriating is they can claim it worked, but nine out of ten times they’re getting skulled.

Detroit tomorrow. Chances are you won’t get goalie’d there. Onwards…