Where To From Here: If Crawford Comes Back? 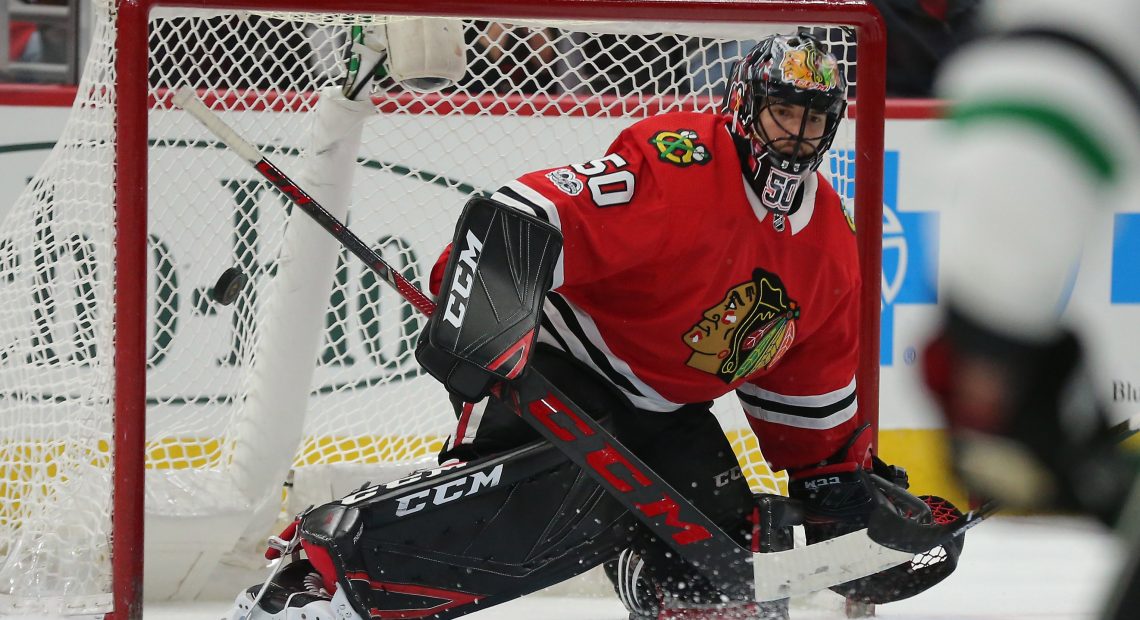 A few weeks back I wrote about how Corey Crawford should retire in light of his latest concussion. I still believe what I said in that piece, and with the accomplishments he’s racked up and what we know about the effects of multiple head traumas, it seems unnecessarily risky for him to return to playing a contact sport.

But much to everyone’s surprise, including mine, Crawford has been skating and working out with Jimmy Waite so a return this season certainly seems possible. And regardless of what I think, at the end of the day I’m just a fan with an opinion, as far removed from the inner workings of the team and as giardiniera-soaked as everyone else (possible more so—I have literally made a scene when actual giardiniera was unavailable in a sandwich place. I’m a peach).

So if Crawford chooses to return to the lineup, the Hawks will obviously play him as their starter, which they would be foolish not to. What would that mean for the team and the season? Let’s examine what should happen (based solely on how I would like things to turn out), and what will happen (based on cruel realism). Shall we?

What should happen: Crawford returns to his Vezina-quality form and plays obnoxiously well, turning the end of the season into a punctuation mark on how he’s one of the best and most underrated goaltenders in the league and has been for a damn good stretch of time. The blue line as a whole dials up its give-a-shit meter as a way to offer him additional protection, and they reverse the depressing trend of defensive play that’s left them league-worst in both scoring chances given up and high-danger chances given up. The Hawks finish the season out of the playoffs, but out of the basement as well.

What will happen: Crawford comes back and his performance will be middling, similar to where he was when he got hurt in mid-December. Some periods and some nights, he’ll be the Crow of old and be lights out; other times he’ll be human and not be able to win the game on his own, and he won’t make saves that he once would have. His save percentage will hover somewhere in the low nine-hundreds, probably around .905, as the Hawks’ awful defense strands him with 40 SOG a night. Their inability to handle Colliton’s man defensive scheme will leave guys with all day in the slot and around the crease taking those high-percentage shots. The Hawks finish the season in the basement.

What should happen: The front office convinces Cam Ward to waive his no-movement clause and they trade him for a bag of pucks. If Bowman found GMs dumb enough to take Manning and Rutta off our hands, you gotta believe he can unload an experienced back-up goaltender who has only been a partial dumpster fire. Then, Collin Delia stays up with the top club and handles a little more than typical back-up duties, maybe close to splitting the remaining 31 games with Crawford (think a 17-14 split, Crawford-Delia).

This way, Delia continues to play at the NHL level and we have a relatively reliable alternative for any time Crawford throws out a turd for the night, or whenever he just needs a couple days to rest. The season is fucked anyway, so it’s not like we need a hot hand to have momentum going into the playoffs. Let Delia learn and improve while Crawford has extra support.

What will happen: One of two things will happen, thanks to the organization’s brain geniuses—either Delia will get sent to Rockford or he and Ward will switch off being healthy scratches. The former wouldn’t be completely terrible because at least Delia would be playing nearly every night. Granted, the Ice Hogs suck too and probably won’t make the Calder Cup playoffs, plus the AHL is goonville and I honestly fear for the safety of anyone playing in that league. But it would be better than the latter option of the Hawks keeping Ward and Delia here, and wasting a roster spot that could go to a young forward currently in Rockford.

And it would all be because they gave Ward a stupid contract. I couldn’t even blame Ward if he chose not to waive his NMC…that’s just looking out for his own interests and you can’t fault a guy for that. But it would be another glaring example of contract incompetence, as Delia would only get to play maybe six or seven more games, and when he’s rusty and not progressing, gets sent back to the press box where no one ever became a better hockey player, and/or has shattered confidence. It would spell the beginning of the end for him here.

What should happen: Crawford should retire and protect his future health, which will also allow the Hawks to limp to the finish line with an overpriced back-up and a youngster who learns to be an NHL-caliber goalie or proves he isn’t one. The front office makes moves accordingly in the offseason to address whatever situation they have with Delia, and whatever implications that carries for the rest of the roster.

What will happen: Crawford comes back at a level far below what we’re used to, and the coaching staff is put between the proverbial rock and a hard place with the roster. This bizarre ménage a trois becomes yet another depressing storyline at the end of the season, as everyone ponders what to do to get out of it.