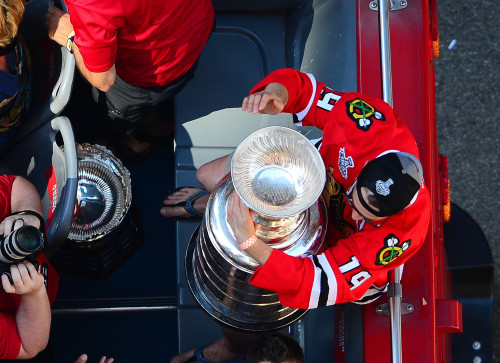 In no particular order, the Hawks just got a big spread in the Tribune about how their fanbase among black people is growing, though more steadily than rapidly. This certainly wouldn’t have hurt the effort there. I don’t know where the majority of that growing section of the fandom lives, but it certainly couldn’t hurt the Hawks to show they care about them–especially coming off the heels of them having to react so quickly to charges they don’t care about women at last year’s convention thanks to Casey Runthade (spelling? Sorry Casey if I got it wrong).

Secondly, one of the reasons Rocky has stated that he wants to build a new practice facility that would be open to the Hawks is he wants to make rinks and hockey more available to the whole city of Chicago. Well, here would be a gesture in that direction, no?

But mostly, we can’t avoid or ignore the clearly large separation of the north and south (and west, for that matter) of this city. That division is arguably the biggest reason, and certainly one of the main roots, of our city’s biggest problems right now. As a city boy born and raised, it basically breaks my heart. I’m not trying to argue that a visit by Lord Stanley’s Chalice to an often ignored hood is going to cure its ills or anything resembling that. But I think there’s value to the Hawks, to everyone really to show that this championship is for the whole city, not just one certain section of it that sadly Chicago often feels like.

Again, is the Hawks’ trophy and they can do whatever they see fit with it. They have no mandate or compulsion to do something they don’t want to. Still, there’s something a bit rough about the imagery of the Cup dining at Gene and Georgetti’s on a weekday afternoon and not anywhere normal people can even see it. I know, it’s just a symbol. And it doesn’t really matter. But I can’t be the only one who doesn’t like what that symbol says, right?

-Right, back to stupid stuff (if the above wasn’t and I’m totally sure that it might have been). We still await any extension for Brandon Saad and Marcus Kruger, and the 1st is coming up awfully fast on the horizon when either could be offer-sheeted.

I suppose it’s folly to try and gauge what either could make, because it’s whatever the market would bear. If Saad’s agent think he can get a 5.5-6 million a year offer from somewhere else, then that’s what he’s worth. It would be a bad deal for any team that signed it, because Saad just hasn’t proven to be that player yet (yet), but there are certainly enough that just have to get to the floor where it wouldn’t matter to them that much.

To me, this isn’t all that hard. We have looked at a 4×4 contract, and it’s mostly because of Max Pacioretty’s contract. Patches signed a six-year, 4.5 AAV before last season. There are a couple differences. One, Patches wasn’t coming out of his entry-level deal at the time and two, he’d bounced back and forth between the AHL and NHL for a few years before establishing himself.

However, before that contract was signed. Pacioretty already had two 30-goal seasons under his belt (at least on pace for one in the lockout season). And he wasn’t spending most of his time on Hossa’s and Toews’s wing either. Saad doesn’t have any. They’re essentially the same guy, power left wingers (though Patches has shown more of a willingness to go to the net more often, but that’s getting pretty minute). I’m fairly sure that if Pacioretty would have played alongside Toews the past three years, he probably eclipses 45 goals.

Again, Stan can point to that when talking with Saad’s agent all he wants and the response will be, “That’s nice, here are four teams that are going to toss $6 million at my client,” and it all becomes moot. But when figuring out what Saad should get (in a vacuum), that’s a pretty fair comparable to point at.

Tyler Toffoli’s bridge deal also comes into play, as he just signed a $3.2 AAV for two years. Saad probably isn’t much interested in a bridge deal, and Toffoli really only has one full season in the NHL as his ’13-’14 was injury-filled. But Toffoli went 23-26-49 last season, and Saad went 23-29-52, and their teammates are at least somewhat comparable. I’m sure Stan would love to slot Saad’s number right in the middle of those. That would seem most fair.

Anyway, we’ll open a thread about 5pm today for all the goings-on, and I’ll be manning the Twitters for it all, and probably drinking while doing it.