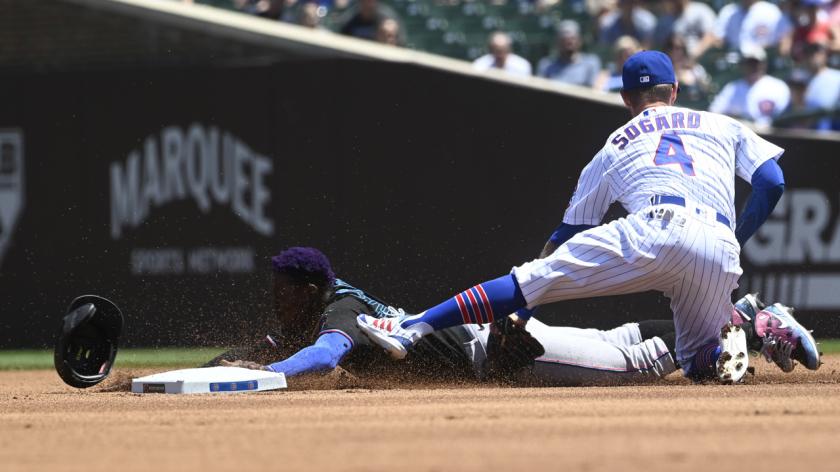 “I don’t think a winning weekend series against this team is a lot for me to ask for.”

For the first time since we got similarly gut-punched in the playoffs last season, the Marlins came back to give us more of what we didn’t ask for. It was an offensive onslaught by Miami that the Cubs just couldn’t match, again. Our starting pitching let us down and even the defense you can usually lean on was spotty. The bullpen was trying its best to get everyone through it, but with no help offensively and a 3-inning start by Jake Arrieta one of these games they weren’t getting a lot of help from any other aspect of the team.

Time to wrap up these horrific games and get on with it. Don’t blame me if this is a short wrap, there was only so much of this baseball I could stomach and I’m sure it was the same for you too.

You absolutely could’ve justified taking Zach Davies out of this game when the Marlins scored five runs in the 3rd inning, but Rossy was once again trying to keep from overworking the bullpen. Davies was fine leading up to the 3rd inning, and pitched two more scoreless innings in the 4th and 5th after that. It was the 6th inning where he gave up two singles, a walk, and a home run that scored three more runners. It was more than enough to get the Marlins out of the game with a win.

The Cubs’ offense all came within the first third of the game. Joc Pederson solo homered in the 1st and 3rd innings to get the only Cubs runs. Meanwhile, the only other players who hit at all were Baez and Rizzo. Dan Winkler gave up two more runs in the bullpen and by that time if you were still watching the game you were subjecting yourself to psychological torture.

Good thing there’s more of this dreck where that came from. Once again I must preface this by saying Jake Arrieta is cemented in Cubs legacy for his first tenure here in which he helped us win a World Series. But this is his second start where he’s been able to throw only three innings before completely collapsing, and this time he didn’t have the food poisoning excuse to help him out.

The Marlins took control of this game early and quickly, as Arrieta allowed six runs in the first three innings of the game, including a pair of two-run homers and two RBIs. After this game got safely blown open, Rossy gave Cory Abbott another try as a relief pitcher. He did well in his first inning in relief, but allowing a walk to Jesus Aguilar to start off the 5th inning would be his downfall. One fly ball and one single later and he allowed yet another Marlins run. In the 6th inning he allowed a double and two walks to make the game 8-0 Marlins before allowing a flyout and strikeout to end the inning. (He has since been optioned again.) He was replaced by Rex Brothers, who allowed a run of his own, Tommy Nance, who allowed two runs, and Eric Sogard throwing in the 9th inning, which pleased nobody.

The Cubs had hits this game from Sogard, Heyward, and Rafael Ortega while pinch hitting. Nothing to write home about by any means.

This game at least had some — literally any — positives that came from it. The Cubs needed to bring in some bench guys to pinch hit to get the team going offensively, but hey, whatever works, right?

Patrick Wisdom was the one who started it off, and he’s honestly been someone I’ve really been liking. He had a super-hot first few weeks when he first came up for us, but even today his single started a spring of hits that gave the Cubs a 2-0 lead to win the game. Jake Marisnick, also pinch hitting, singled, along with Pederson singling to score Wisdom. (Pederson has been the only Cub this series with anything remotely representing consistent offense.)

The other Cubs run that happened earlier in the game was able to be scored without any hits at all. Heyward was able to walk, and after two strikeouts Pederson was able to reach on a fielder’s choice/throwing error. It only took a passed ball to score Heyward.

This was the defense’s best game, obviously, with Alec Mills allowing no runs on six hits and the bullpen not letting anybody score. It was all accented by a few Javy Baez highlight reel defensive plays, which are always fun to see. Craig Kimbrel closed it out on another solid, two-strikeout performance. For the second series in a row, a losing series ended on a high note.

This team is a streaky rollercoaster, but despite the win to cap off the weekend I am by no means feeling like this team is in a good place at all. They need more help than some Ricketts-approved trade deadline moves can make in the playoffs (which the team was fully hoping they weren’t gonna have to make come July anyway). The offense is still showing really bad cold streaks that we have seen year and year again. They will try to add at the trade deadline, and all we can do as fans is just pray that the offense clicks again like they were just a few weeks ago.

Despite the bad series, baseball goes on, as does life. The Cubs have a pair of games against Cleveland tomorrow and Tuesday to focus on now. Cleveland is behind only the White Sox in their division, as our friends from across town continue to cling to the first-place spot. Cleveland just lost a series against the Pirates this weekend but swept a series against the Orioles before that. Despite the losing series, Cleveland has scored 25 runs in their last four games, whereas it’s taken ten games for the Cubs to rack up that many. So if the Cubs want to win either of these next two games, the offense had better turn it on quick. Go Cubs go!