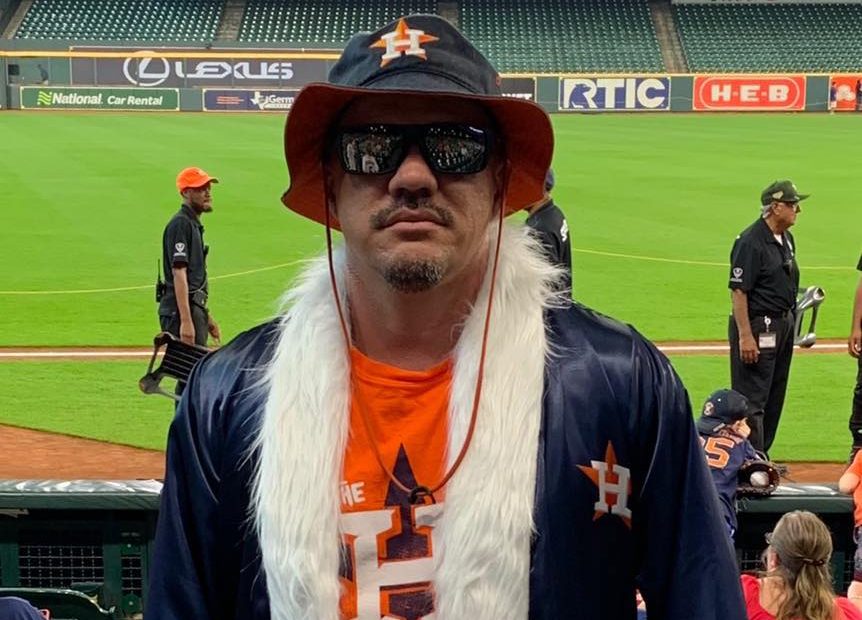 Not much you can say about a series where everything that could possibly go wrong did. I suppose the only bright side is the Sox made it through 4 straight games without anyone’s soft ligament tissue bursting into flame on the field. Huzzah.

I think the worst part about all of it is now I have to wear an Asstros jersey in September because I lost a bet to the guy in the above picture, who is a physical representation of every single Houston fan on the planet squished into one tiny body. Don’t ask me why he looks like a homeless Ric Flair, there’s no good answer.

-Dylan Cease just did not have it in this one. 3.1 Innings with 7 runs given up, and 2 walks somehow still doesn’t convey just how little he was able to command his stuff. Everything was up in the zone, but not up enough and it was getting pounded. Hopefully this is just a hiccup, but the fact that he has yet to defeat a team with a winning record is less than confidence inspiring.

-Yoan Moncada is hurting from whatever is currently ailing him, and it shows. I know the Sox desperately need his bat in the lineup, but if he’s going to be dragging ass perhaps it might be best to just bite the bullet and rest him.

-4 hits ain’t gonna get it done against ANY major league lineup, let alone one of the top teams in the AL.

-That being said, Jose Urquidy looked to be at the top of his game with 69 of his 92 pitches going for strikes. The Sox had a barrel rate of 0.00%, which is pretty unheard of outside of Jake deGrom. Not a great night all around.

-As much as Dylan Cease didn’t have it in game 1, Carlos Rodon made up for it in game 2. The only difficulty he ran into was in the 5th, where he walked in the only run he gave up. Until that point he was cruising through the Astros lineup, averaging a mere 10 pitches thrown per inning. He deserved a better fate.

-While the Sox offense was able to muster a few more hits this game, they managed one less run due to their inability to hit with runners in scoring position. Grandal, Lamb and Vaughn all stranded multiple runners in their at bats, and none of them looked good doing it.

-Cody Heuer finally put together a solid inning of relief, striking out 2 while keeping the game tied in the 8th. More please.

-Not much Garret Crochet could do about Alvarez’ game winner, as he poked a very good slider on the outside corner down the line past Moncada. Sucks, but it happens. Still think that Crochet’s ultimate destiny is a high-leverage reliever a la Josh Hader.

-Scoring 1 run and stranding 8 runners won’t win any awards in the majors, and that’s two stinkers in a row for the offense. Not a trend yet, but it’s getting close.

-Lance Lynn finally had a stinker, and it couldn’t have come at a worse time. He didn’t make it to the 5th inning for the first time since his opening start this year in Anaheim, but in that one it was the defense that let him down. In this start he was just caught throwing too many pitches to a too-patient Astros team that got him into situations where they could simply sit on his fastball.

-Two extra base hits ain’t gonna get it done 9 games outta 10. This game was not The One. Only Moncada and Vaughn were able to make it to 2nd base, with everyone else pretty much flailing at what Framber Valdez was offering up.

-On the positive side of things Ryan Burr had another quality outing, going 2 strong innings, only giving up one walk and a hit before giving the ball to Jose Ruiz, who promptly gave up another run.

-Another game, another 0-fer for Yermin who looks completely lost at the plate now.

-Some piss-poor defense in this one, which saw two plays (only 1 of which was called an error by the official scorekeeper, who must have been more shitfaced than I was on Saturday night) that extended the inning for the Astros and forced Dallas Keuchel to throw far too many pitches. Yoan’s throwing from 3B has looked off since he came back from his NOT COVID stint on the bench.

-Speaking of Dallas Keuchel, he was clearly pretty amped up to return to the Juice Box in the first two innings, as he’d alternate beautifully placed cutters and sinkers with pitches that were nowhere near the zone. Unfortunately he never completely settled down and was done by the 3rd inning.

-Lance McCullers had the Sox number on Sunday, as outside of the Jake Lamb 2-run shot in the 2nd he was never in any danger at all.

-Not much else to say other than the fact that the team sucking early in this game allowed me to switch over to the US Open earlier than I thought I would. Unfortunately there wasn’t a whole lot of excitement in that either, so a pretty boring Sunday afternoon sports-wise.

Ultimately, this series is fairly meaningless in the long run. The Sox had just taken 2 outta 3 from two of the top teams in the East, and they caught the Astros right as they were heating up. Scoring 8 runs in a 4 game series is never going to end well, and all we can really do is hope this is merely a bump in the road.

Next up we get 2 Nights In Pittsburgh as Lucas Giolito and Dylan Cease draw the starts for the midweek series. As far as pallet cleansers go, the Pirates are the perfect option being 20 games below the .500 mark. It’ll be a good test for the offense to see if the Astros series was merely a fluke, or a portent of something far more sinister.