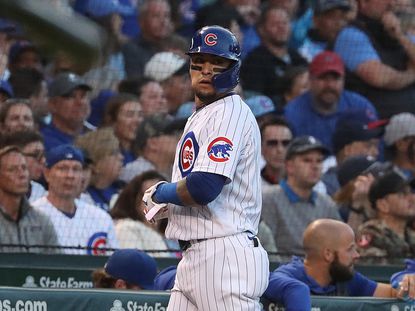 I guess a split is better than a series loss, even if the series is only two games. The Cubs certainly were hard to watch last night, with Javier Baez being the main storyline as he was benched for making the wrong offensive play. However, Kyle Hendricks and a late-to-the-party-but-at-least-existent Cubs offense were able to help them rise above Cleveland tonight, despite a sticky situation in a late inning with the bullpen.

Despite the recent streak of doing more losing than winning, the Cubs still find themselves tied with the Brewers for first in the horrific Central Division with a 40-33 record. The team is still too home run dependent, but it seems as though whenever they need a jolt to the offense all Rossy has to do is pinch hit a couple players who immediately make good contact with the ball. How long can he keep doing that before the trick doesn’t work anymore? Not forever, that’s for sure, but for now I’ll take all the help we can get.

The pitching did all they could for this one, and yet the Cubs couldn’t produce enough hits to get the job done.

Adbert Alzolay is finally back, being activated off the IR and starting this game. He went 4.2 innings tonight and he allowed three runs, all of them coming thanks to home runs. Alzolay was able to hold the Cubs in it for a solid four innings, only allowing the solo homer in the 2nd inning during that time. The offense was able to put players in scoring position in the 2nd, 5th, 7th and 9th innings — Willson Contreras in particular had two doubles and walked during his third at-bat — but nobody was able to convert.

After forgetting how many outs there were in the bottom of the 4th inning, Baez got doubled up in a play that ended the inning, jogging to third, which allowed a throw at 1st to get him out. Embarrassing for everyone involved and everyone watching, to say the least. Rossy immediately benched him in favor of Sergio Alcantara, who, like Baez, had no hits this game either.

After Alzolay gave up a two-run homer in the 5th, Keegan Thompson and the bullpen after him took over, allowing just two hits and one run in the process. Tommy Nance was the “worst” of the bunch, throwing a couple of wild pitches that ended up advancing and scoring a runner to make it 4-0. By this time the Cubs had seemed to give up, and another beer snake that had been forming in the outfield was eviscerated by a fan. The cups rained down onto the field, a good metaphor for how this game had gone on the Cubbies’ end.

Although Kris Bryant was able to get the Cubs ahead early in the game with a solo homer, it wasn’t until the 6th when Rafael Ortega pinch hit for Hendricks that the Cubs started to generate some real offense. Alcantara, who doubled before Ortega, got to third and was batted in by Joc Pederson as the next batter up in order to put the Cubs ahead 3-0. Bryant walked after that and then Baez’s ground rule double and Contreras’ single made it 5-0 Cubs.

The Cubs were able to wait so long in the game before producing offensively because Kyle Hendricks was able to add yet another game to his growing pile of quality starts for the Cubs, allowing only four hits and no runs in 6.0 innings. He had a habit of allowing hits off of the first batters he saw each inning but limited contact for Cleveland, able to get the three outs after allowing a hit to keep his shutout game.

Of course, the Cubs can’t have every part of their team working their best at the same time. It was time for the bullpen to have an off day, and when I say the bullpen I mean Ryan Tepera, who had an ugly outing, putting himself in a bases-loaded situation with no outs. He gave up a hit to score one Cleveland player and then a rocket to right field missed being a game-changing home run by mere feet. However, he was able to strike that batter out and get out of the inning with a pop fly caught by Jake Marisnick, and during the next half-inning solo homers by Contreras and Patrick Wisdom cemented the Cubs win. (The other relief pitchers, Andrew Chafin and Dan Winkler, allowed no hits in their two innings pitched.)

The Cubs have an off day tomorrow before it’s time to take on the LA Dodgers this weekend in California. The last time we saw the Dodgers was when we swept them during a slew of 7-inning games in early May, marking the beginning of the Cubs’ hottest win streak of the season so far. Since that series, the Dodgers have gone 27-13, healed up their injuries for the most part, and went on an eight-game winning streak.

This series will not be an easy one by any means, especially comparing their rotation to ours. Since Hendricks and Alzolay just played the last few days, it’s going to be a real sketchy weekend when it comes to our starters. Do you trust Zach Davies? I don’t. Jake Arrieta has gone only three innings for two starts in a row, allowing ten hits total. Is Alec Mills 100% healthy? Trevor Williams has resumed throwing, but he’s not known for his quality starts of any kind. Say a prayer for this weekend’s series and hope something good comes our way. Go Cubs go!