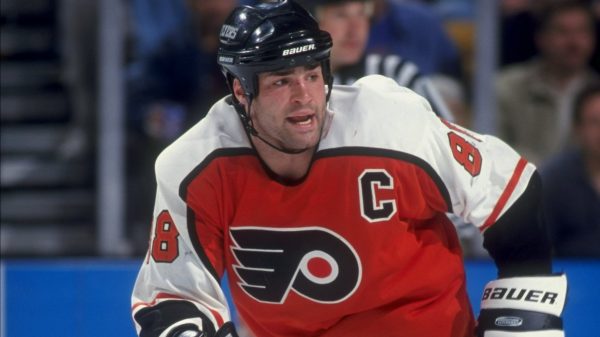 The discussion stretches out way beyond the Hawks, but we’ll start with them. In the summer of ’92, the Hawks were coming off their first Stanley Cup Final berth in 21 years, where they promptly were turned into plasma by the Penguins. And no team could tear down their own success like the Hawks could back then. So right after that season, as Bob Pulford weaseled his way back into prominence in the organization by promising Wirtz he could do everything cheaper, he was able to marginalize Keenan by restricting him to only GM duties. There was a fear that Keenan’s top assistant, Darryl Sutter, would be hired away by another team and Wirtz was not going to have that. So Keenan was kicked upstairs, Sutter installed as coach, and Keenan was immediately miserable.

But he had engineered this deal. And had it gone through, the Hawks would have featured Lindros and Roenick as their top two centers, Joe Murphy would join later on the wings, and Chelios on the blue line. They also would have given the starting goaltending role to Dominik Hasek. With Belfour and his oddball attitude sticking around, Keenan was forced to cash in on Hasek to assuage Belfour’s ego, getting something named Stephane Beauregard and a 4th round pick (which became Eric Daze) in return. Please take a moment while every Hawks fan above 30 years of age chucks something valuable against a wall.

Does that make the Hawks better? Hard to say, as the ’92-’93 Hawks finished atop the Campbell Conference before Curtis Joseph drank virgin’s blood and turned demonic in net in a first round sweep. But for the years after would they have been more set up?

You’d have to say so. Just look at how far Hasek was able to take a team of Michael Peca and his merry band of bums for the majority of the 90s. With a constant Hart candidate in Lindros, a constant Norris candidate in Chelios and still in his prime Jeremy Roenick as a “second” line center to go along with Hasek in net, you’d have to say the Hawks would have had at least one or two very long playoff runs in them.

They also wouldn’t have had to get nothing for Steve Larmer when he had enough with the way things worked around here. Of course, the landscape around them would have changed too. Would Roenick still have high-tailed it after 1996? Almost certainly, because if Wirtz was already paying Lindros he almost certainly would have never paid Roenick. But the Hawks wouldn’t have been dead in the water when they did, or at least not counting on Alex Zhamnov and his DUI-per-week routine to be a #1 center.

But where this stretches out is how everything else changes. For the Nordiques, they end up with Belfour but not Peter Forsberg. Larmer was a wonderful player, but he wasn’t Peter Forsberg. We don’t know what the Nordiques would have done with the picks and money they got from the Hawks. They still move to Colorado. But when they get there, with Belfour in tow, do they still feel the urge to make the move for Patrick Roy when he becomes available? Is Belfour good enough to get that team, minus Forsberg, past Detroit, a Lindros-led Hawks, to a Cup? Or is Roy moved for Belfour instead of Jocelyn Thibault? You can’t say for sure. And if he didn’t, what would the market in Colorado look like without any banners today?

Where would have Roy gone then in the winter of ’95-’96 when he swore to never don the Bleu, Blanc, et Rouge again? How does that change the landscape? Could the Wings have ponied up for him, trying to upgrade on Chris Osgood (I know I know, how could anyone want to ever upgrade on Chris Osgood?) The Leafs? The Rangers?

And if Keenan was allowed to make this deal, would he have been more comfortable chain smoking in the pressbox during games instead of getting fed up and bolting for the Rangers before the ’93-’94 season? If he doesn’t go there, are we talking about the Rangers having a 77-year Cup drought right now?

As for the Flyers… well, Peter Forsberg would’ve still been traded when they wanted to bring Ron Hextall back for the 12th time, their fans would still be miserable and we’d still be waiting on our cheesesteaks from Travis Hughes from 2010.

Without Hasek, what sporting injustice do the Buffalo natives cling to as there would be no foot in the crease controversy as the Sabres would most assuredly have sucked throughout the 90s? Would they even have a hockey team at this point? Probably doesn’t matter because they barely do now.

And the Wings… with no Avs-shaped obstacle, or at least a lesser one, would they have banked five or six Cups instead of four? Or would the rivalry have shifted to the Hawks and Wings instead and how would those have played out? Would that still have convinced Detroit to give Ken Holland essentially a lifetime contract, keeping him around way past the time it was discovered he might have just gotten lucky with a couple late picks and an open checkbook from Illitch and wasn’t really equipped to deal with a cap-league? Oh… wait… whoopsie!

But none of this happened, because the elder Wirtz was cheap. Ah well…